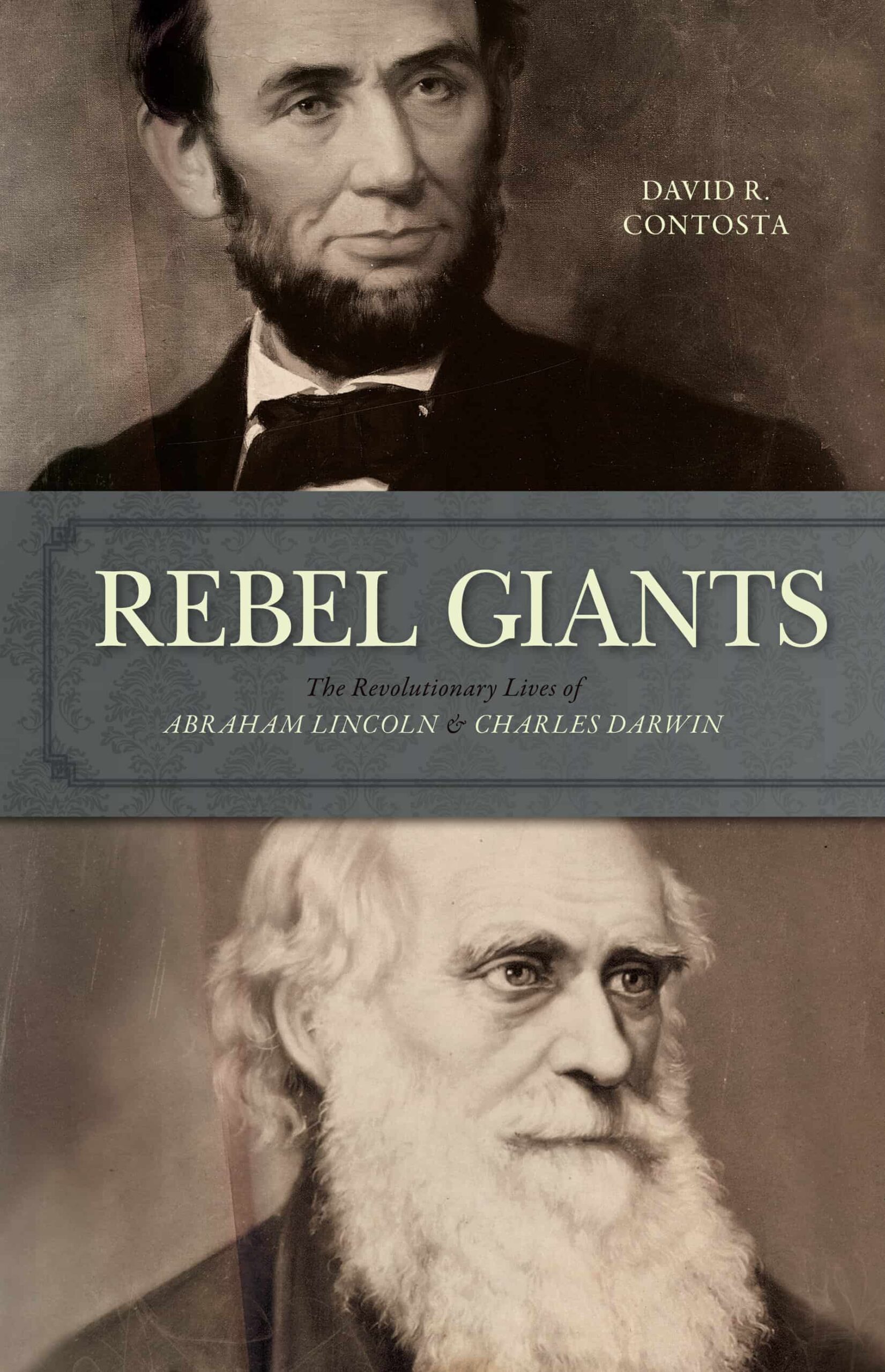 Rebel Giants, David Contosta’s latest book, offers a timely examination of the lives of two men who transformed their world—and ours—in ways that are difficult to summarize adequately in a few hundred pages.  Modest but ambitious characters, Charles Darwin, and Abraham Lincoln precipitated scientific and political revolutions whose ultimate successes neither of them had been able to comprehend in their lifetimes. Darwin’s discovery of natural selection provided one of the great intellectual earthquakes of the millennium, impacting not just the biological but the social sciences as well. Meanwhile, on the other side of the Atlantic, Lincoln’s vision of political equality (for men, at least) brought a “new birth of freedom” to the United States and helped dismantle one of the most odious institutions in modern history—slavery. As Contosta argues, Darwin and Lincoln “helped to teach the world what it means to be human—free, equal, and connected to the rest of creation” (page 330).

At the same time, Contosta, Professor of History at Chestnut Hill College in Philadelphia and the author of several books on American history, has offered his readers an unusual pairing. Lincoln and Darwin were most certainly aware of each other but never met or even exchanged letters. Moreover, neither seems to have been influenced to any significant degree by the other’s ideas or books; at best, each followed intellectual currents that swept their countries in the mid-1800s. Lincoln owned and likely read a copy of Darwin’s Voyage of the Beagle, and Darwin followed the events of the American Civil War with disappointment, but these can hardly be counted as crossed paths. Both men, curiously enough, were born on the same day, February 12, 1809. Since this year marks the bicentenary of the birthday they shared, perhaps we will hear more about Darwin and Lincoln than we otherwise would.

Although these two great men led separate lives, Contosta has written a lively joint biography that moves beyond the coincidence of their births and argues that his two subjects shared much more than has been acknowledged. As children, both suffered through the deaths of their mothers; as fathers, each endured the unfathomable horror of burying more than one child.  Both suffered from an array of physical and psychological maladies that sometimes interfered with their work. Their professional lives were marked by fierce ambition, yet both Lincoln and Darwin meandered for years before their greatest achievements took shape. And along the way, they faced setbacks and disappointments that could easily have consigned them to anonymity. (Many of these moments of crisis and opportunity were almost eerily synchronized. For instance, Darwin’s Origin of Species was published just months before Lincoln’s drive for the presidency began.)

More substantially, both Darwin and Lincoln were products of an emerging liberal ethos that celebrated “Reason” and “Progress” while viewing traditional ideas—particularly religion—with skepticism. In this way, their biographies tell us quite a bit about the most eventful decades of the 19th century. As Contosta explains, Lincoln and Darwin were asking and answering questions that we continue to ponder to this day: What is the meaning of human freedom and how can we achieve it?  How did the incredibly complex and interrelated life forms on our planet come to exist and how can we save this precious biological inheritance?

While the author insists that the inspiration for the book came from something more substantial than an astrologer’s glee, it’s hard to read Rebel Giants and not be struck by the odd symmetries in their lives.

As a work of scholarship, Rebel Lives does not break new ground. Indeed, readers who are already familiar with the lives of Darwin and Lincoln will likely not discover much new here as Contosta relies heavily on the previous biographies to develop the book’s structure. But it is a well-written and sympathetic account of these two remarkable lives, and it is highly recommended for anyone who has been meaning to learn more about either of these great men.