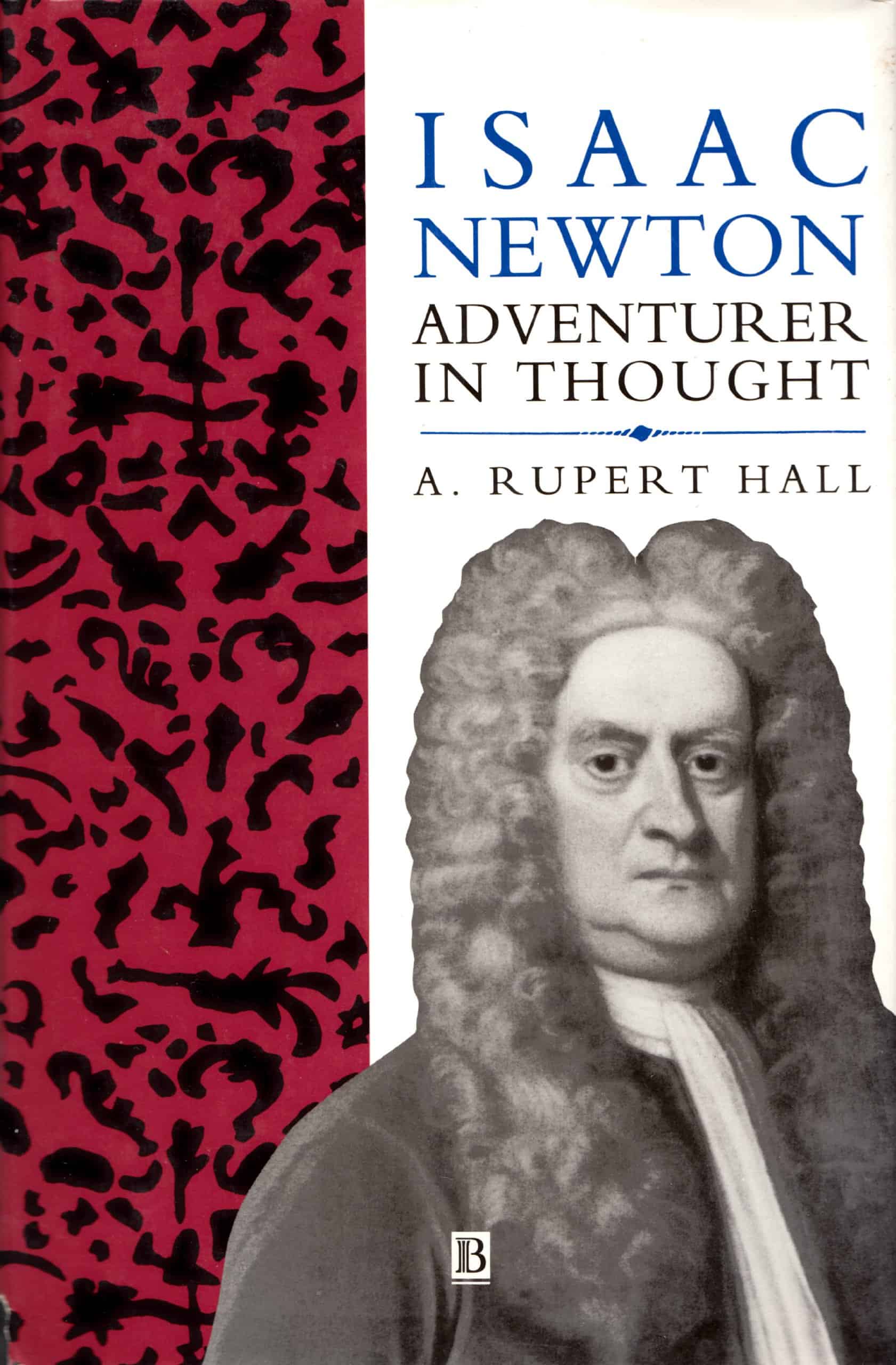 When investigating the life of a scientific genius such as Sir Isaac Newton (1643–1727), it is often difficult to know when or where to begin. In his 84 years, Newton distinguished himself as a preeminent physicist, mathematician, astronomer, philosopher, alchemist, and (some would even say) theologian. His contributions to science regarding the laws of motion, universal gravitation, differential calculus, the light-spectrum of colors, the law of cooling, the principles of momentum, and the origin of the stars touched the lives of those around him in his own era and for centuries to come. To paint a portrait of such a man is a daunting and exhausting task, and yet A. Rupert Hall (who died in 2009) had succeeded in doing just that.

In Isaac Newton: Adventurer In Thought (Cambridge University Press, 1996), Hall—who was a prominent British historian of science—had taken great pains to put flesh around the mathematical myth of Newton, to give his extreme mental powers a personal context and catalyst for Newton’s life and innovations. The final product is no “Newton For Dummies,” but a thoughtful, provocative, considerate, and calculating analysis of who Newton was, what social forces influenced him, how he responded to his environs, why he chose the paths he did, and what consequences came from his efforts.

Recognizing the great research predating his examination, Hall supplemented his conclusions and speculations with the investigations and proclamations of other scholars on Newton’s private life to deepen the reader’s understanding of the man. As Hall stated, “There is no single key to understanding Newton, no single source or stream of knowledge to which he applied his unique mental powers” (Hall, xiv). Hall recognized that Newton was a complex man of complex thoughts with a complex life during a complex time. Thus, through careful consideration of contemporary and ancient biographers, along with his own thorough investigation, Isaac Newton: Adventurer In Thought is a powerful resource for historians and scientists alike.

In logical and evidential fashion, Hall’s biography follows the timeline of Newton’s life, touching upon the most important moments and periods of development for the prestigious scientist—his childhood and young adulthood through college; professorial relationships with the University of Cambridge and his peers; further development into an outstanding scientific pioneer and scholar; activities and advancements as an established gentleman in academia and greater English society; and extra-curricular investigations of alchemy and theology through his middle and golden years. Hall’s timeline is predictable, but his approach and delivery are powerful and resonant. The reader comes to understand not just what Newton did, but, more importantly, the reasons behind his actions (or at least as much as can be fathomed from the writings and words of this all-too-often enigmatic, eccentric, and taciturn natural philosopher).

With such a rich, fulsome account, one can point to more than a few examples of the depth of this tome. Hall’s timeline for Newton’s transition from childhood to early adulthood is fascinating, albeit too brief; however, considering the desire for more historical and literary evidence of Newton’s youth, what is presented is more than sufficient. Perhaps in good writing form, Hall had just fanned the flames of future interest and investigation of young Isaac Newton: “It seems strange that (unlike Butler, and Somerset Maugham in his finest novel) Newton’s biographers have generally spent little pity on his (probably) loveless and lonely childhood, while expatiating on the twists that this may have introduced into his personality” (Hall, 4-5).

Throughout the rest of the book, Hall continued this supposition that both the external and internal factors had a quantifiable effect on Newton’s activities and mental machinations. The author takes the reader on a very personal journey of investigation, highlighting the key moments with in-depth insights that brought Newton his great success and fame. Delightfully, the reader is provided a vicarious opportunity to work through Newton’s scientific process while enjoying the fruits of his great discoveries.

Regarding Newton’s contributions to mathematics, Hall stated, “The important and certain truth is that at this early stage of his mathematical development Newton had forged the key to open one wide door to his inventions” (Hall, 34). Concerning the physicist’s work in optics, “The notes support Newton’s contention in that letter that he was greatly surprised to find the spectrum markedly oblong, rather than round; but the letter concealed the fact that the reason for its shape was at once evident to him from his earlier discovery of the unequal refraction of red and blue rays” (Hall, 48). As far as Newton’s astronomical investigations, Hall wrote, “Newton, here combining an inheritance from both Descartes and Galileo, recognized a simple celestial law of centrifugal conatus, always proportional to the inverse square of the planet’s distance from the Sun” (Hall, 62). And about Newton’s studies on gravity, Hall noted, “To banish God from Nature is in effect to deny his existence; many years later Newton returned in both the Principia and Opticks to the contention that a true natural philosophy must prove God’s perpetual maintenance of Nature, forming and reforming the parts of the universe” (Hall, 75). Even more intimate quotations could easily be added from Hall’s in-depth exposition on Newton.

One of the fascinating sections of Isaac Newton: Adventurer In Thought is Chapter Nine, about the “Private and Public Life, 1685-1696.” Perhaps more than anywhere else in this book, this chapter provides a glimpse of the human, sometimes-mundane and sometimes-insane, side of the great scientist. Still, by “fleshing out the man,” as mentioned earlier, Hall managed to foster compassion for his subject as a very human and emotional person having to deal with the common scenarios and problems of all humanity—money, friendship, rivalries, spirituality, exhaustion, frustration, etc. For example, “Newton in the early 1690s may already have laid this difficulty before such intimate friends as Locke, who certainly knew what Newton’s private opinions were. The difficulty may have impeded Newton’s appointment to a post in the service of the State before 1696; the breakdown might have been the price paid for a decision not to place scruple before preferment, which permitted his move to the Mint in 1696. It should be added, however, that never in his life was Newton—or Boyle or Locke—out of communion with the Church of England” (Hall, 245).

In the end, Hall’s biography of Sir Isaac Newton successfully presents a full historical account of the man (even Hall’s appendices deserve commendation), but life is more than just dry historical events. There are also emotional, physical, psychological, and spiritual elements at play throughout Newton’s life, and Hall does a thorough and effective job in lifting the veil of mystery regarding these forces pushing and pulling upon Newton from childhood to deathbed. Considering the quality of analysis, the evidence examined, the careful balancing of implication and inference, and the honest appraisal of a very human scientific monolith, A. Rupert Hall’s Isaac Newton: Adventurer In Thought is a must read.