Hemingway and Pound: A Most Unlikely Friendship 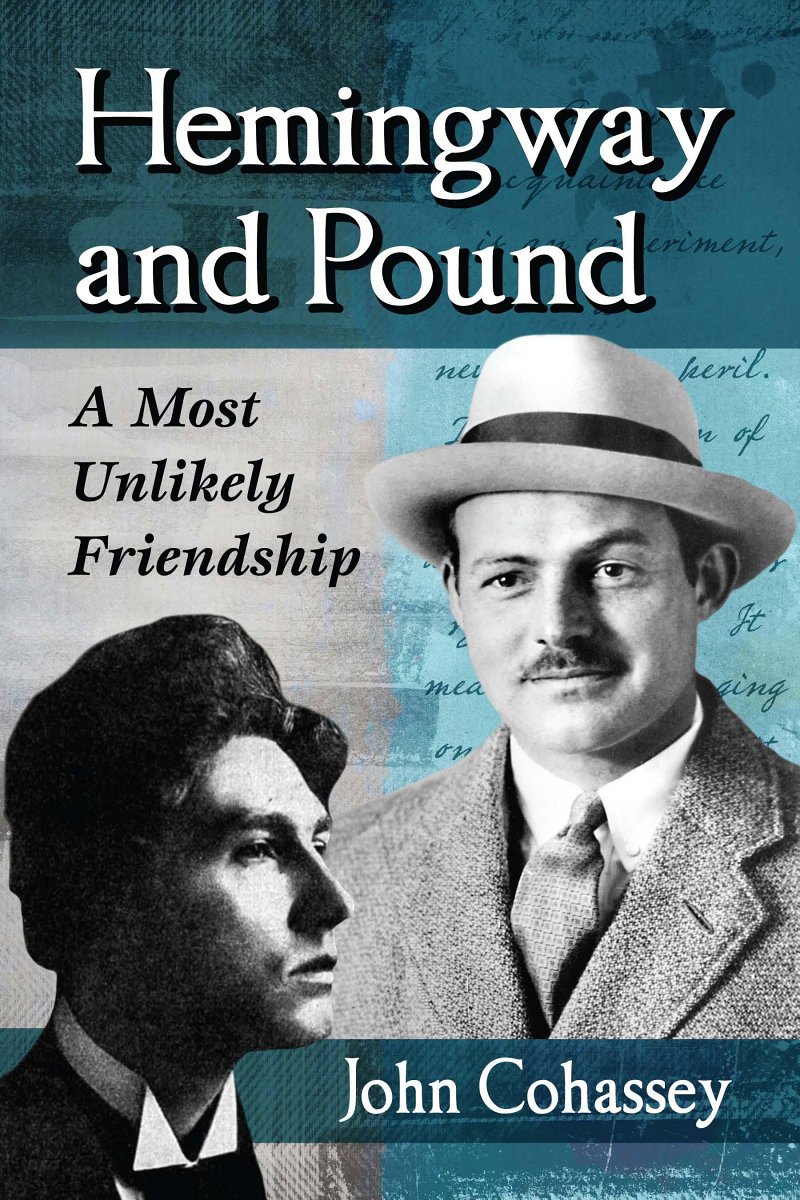 Hemingway and Pound: A Most Unlikely Friendship

Ernest Hemingway had a complex relationship with the poet Ezra Pound, who was 14 years his senior. There were many marked differences between the two icons of American literature. Pound was pro-fascist; Hemingway was anti-fascist. Pound was a teetotaler, Hemingway, a heavy drinker. Pound liked fencing, while Hemingway boxed. But there was some common ground as well: both suffered from depression, inspiring historian and Hemingway scholar John Cohassey to trace their 40-year relationship in Hemingway and Pound: A Most Unlikely Friendship.

Cohassey’s examination begins with their first meeting in 1922 at Pound’s Paris apartment on the Rue Notre Dame-des-Champs, where the poet was dressed in an “open Byronic collar and fin de siècle-style clothes.” At this time, Hemingway was familiar with Pound’s three Cantos and “Hugh Selwyn Mauberley,” a long, autobiographical poem in which Pound criticizes authors and publishing houses for caring too much about reviews and sales.  Pound demanded craft over the bottom line. However, after just a few discussions with Pound, Hemingway was convinced that he was the greatest living poet, along with William Butler Yeats.

Later, Pound served as Hemingway’s mentor and agent, editing his work and sending his poems out to several little magazines such as The Dial, where T. S. Eliot’s “The Waste Land” first appeared in the United States. (Pound also edited “The Waste Land.”) After The Dial’s editor rejected Hemingway’s stories and poems, another American writer, Sherwood Anderson, introduced Hemingway’s work to the editor of The Double Dealer, who published the author’s first creations. Pound also advised Hemingway to read Gustave Flaubert’s Madame Bovary, as well as works by Henry James, T. S. Eliot, Homer, and John Donne. And Pound, an imagist, stressed to Hemingway “the direct treatment of the thing, and to use absolutely no word that did not contribute to the presentation.” And readers notice, in Chapter 16 of Hemingway’s first collection of short stories, In Our Time, “Pound’s demand [that] to make it new was not reinvention, but uniqueness in expression through the combination of words, symbols, and abstract forms::

MAERA lay still, his head on his arms, his face in the sand. He felt warm and sticky from the bleeding. Each time he felt the horn coming. Sometimes the bull only bumped him with his head. Once the horn went all the way through him and he felt it go into the sand. Someone had the bull by the tail. They were swearing at him and flopping the cape in his face. Then the bull was gone.

Hemingway also inspired Pound when he explained how he was injured in the Great War.  Pound memorialized the July 8, 1918 event, wherein an Austrian mortar exploded near Hemingway, ripping his knee to shreds.

And Ernie Hemingway went to it

Too much in a hurry,

And they buried him for four days. (Canto XVI)

Readers will note Hemingway’s embellishment of the event—“They buried him for four days”—when, in reality, he was rescued just two hours later. Pound’s The Cantos is an epic poem which he started in 1915 and he never finished. It features his thoughts about writers such as Homer, Dante, Yeats, and Tennyson, and his feelings about politics and his position about Jewish financiers.

Hemingway and Pound left Paris in the 1920s. Hemingway moved to Key West, Florida in 1928 with second wife Pauline, where he finished Death in the Afternoon, his treatise about bullfighting, To Have and Have Not—which features friends from Key West—and Winner Take Nothing, his 1933 short story collection featuring “A Clean, Well-Lighted Place.” Pound, tired of the Parisian milieu, moved to Italy in 1924. There, he met Benito Mussolini, inspiring Jefferson and/or Mussolini, in which Pound compares one of our Founding Fathers and the founder of the University of Virginia to a fascist leader: “both his subjects were genius statesman—driven not by a will of power by the will toward order.” Pound settled in Rapallo with his wife Dorothy Shakespear.

Then, Cohassey wisely writes about each artists’ complicated relationships with women, tracing Hemingway’s courting of his four wives—Hadley, Pauline, Martha, and Mary—and tracking Pound’s relationships with his wife Dorothy, whom Pound married in 1914, and his longtime mistress Olga Rudge, a concert violinist, whom Pound met in Paris in 1923. Cohassey explains: “Pound eventually had two children—Omar [born 1926] with Dorothy, and Mary [born 1925] with Olga Rudge.” During WWII, Pound, Rudge, and Shakespear lived together for a while in Rudge’s apartment in Italy: “Dorothy later recalled it as a form of hell.”

Additionally, Cohassey discusses Pound’s and Hemingway’s time on the FBI watch list. The FBI began scrutinizing Hemingway when he formed the Crook Factory in Cuba. This group was comprised of 25 of his friends who searched for German U-boats on his fishing boat, Pilar. If Hemingway spotted one, he would call for backup, but he carried with him, on Pilar, jai alai players, and friends who stood ready to lob grenades into the hatches of the U-boats. “In 1943, the FBI had opened a file on Hemingway’s anti-submarine activities, a file that would continue in its surveillance until 1955.” Records show that Hemingway never did locate a German submarine.

Pound’s infractions were more serious. His friends, including Hemingway, knew about his love for Mussolini and his hatred for President Franklin Roosevelt, and they listened to his anti-Semitic rants about Jewish bankers. But when he went public with his fascist Radio Rome broadcasts, the U.S. Army arrested him for treason, locking him up in Pisa in a six-by-six-foot cage Pound called “his gorilla cage.” After the transcripts arrived in the United States in July 1943, a grand jury found Pound guilty of treason. In November 1945, “Pound was extradited to Washington D.C.,” where he faced the death penalty.  His attorney Julien Cornell’s strategy to keep Pound mute during the trial (to claim he was mentally unstable) worked, leading to Pound’s 13-year residency inside St. Elizabeths Psychiatric Hospital in Washington, D.C. His friends—including E. E. Cummings, William Carlos Williams, Marianne Moore, Robert Lowell, T. S. Eliot, wife Dorothy, and mistress Rudge, visited him and continuously pleaded for his release. Although Hemingway never visited Pound at St. Elizabeths, fearing he would be placed back on the FBI watch list, he signed a letter along with Robert Frost and T. S. Eliot to help free the aging poet. Hemingway believed Pound was insane, “not the same man he had known back in early Paris days,” but he believed he belonged in Italy “where he is loved and understood”; in April 1958, when Pound was 72, his indictment was dismissed. He returned to Italy that July, living quietly in Venice until his death on November 1, 1972, outlasting Hemingway by 11 years.

Although the Pound-Hemingway friendship was contentious at times, Hemingway did not have many relationships that lasted 40 years because he simply did not nurture his associations. He and F. Scott Fitzgerald fell out of favor quickly and he lampooned Sherwood Anderson with The Torrents of Spring. So the fact that he kept in contact with Pound and was instrumental in his release from St. Elizabeths proves that he cared about and respected the poet. And John Cohassey meticulously writes about their unique bond in Hemingway and Pound: A Most Unlikely Friendship.