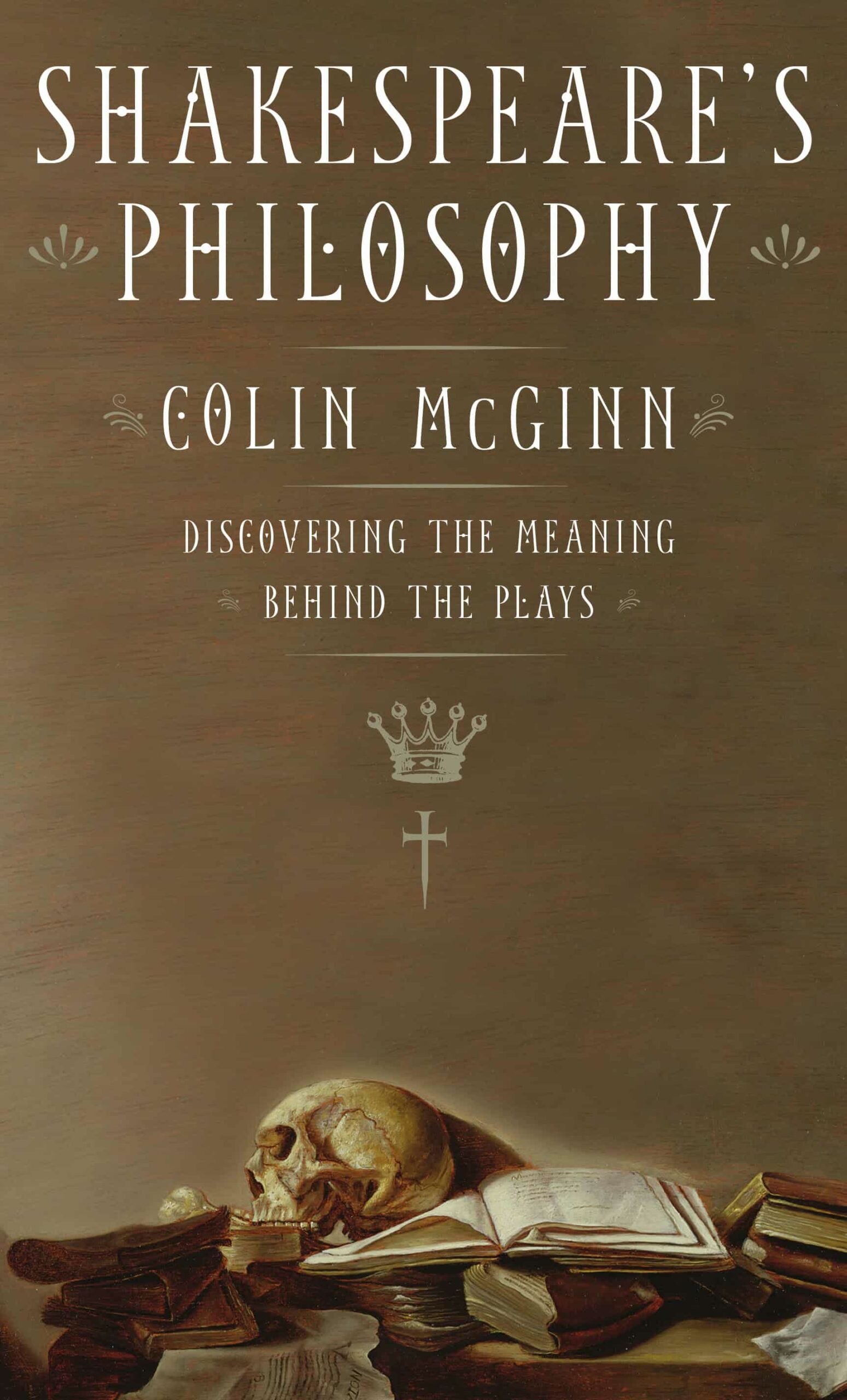 Although he died nearly 400 years ago, William Shakespeare’s legacy continues to resonate today. His works, which include 37 plays, five poems, and 154 sonnets, strike a chord with modern audiences not only because they are immensely entertaining, thought-provoking, and filled with vividly drawn characters, but also because of the Bard’s universal themes—power, love, loyalty, family, revenge, jealousy, and virtue. In Shakespeare’s Philosophy, Colin McGinn writes about the philosophical themes embedded in Shakespeare’s works. McGinn’s approach, and, therefore, his book, is not a literary examination, but rather a philosophical analysis of six of Shakespeare’s great plays: Midsummer Night’s Dream, Hamlet, Othello, Macbeth, King Lear, and The Tempest.

Educated at Oxford University, McGinn has taught philosophy at University College of London, Oxford, and Rutgers University and is currently a distinguished professor of philosophy at the University of Miami. He has written 16 previous books, including The Making of a Philosopher.

The book is divided into 12 chapters. The first one focuses on general themes, such as evil, terror and anxiety, man versus nature, magic, power and knowledge, language and power, and deception. Chapters 2-7 cover analyses of the plays mentioned above and each begins with a listing of the play’s protagonists. This helps the reader gain familiarity with the principal characters and is a nice way to introduce the thoughtful analysis that follows. Chapters 8-12 touch on Shakespeare and gender, psychology, ethics, tragedy, and genius, respectively. There is also a comprehensive notes section, along with a bibliography and index.

In Shakespeare’s Philosophy, McGinn states that the general themes of uncertainty and doubt pervade all the Bard’s works. Uncertainty is evident in three areas: knowledge and skepticism, the nature of the self, and the character of causality. Skepticism and doubt ran rampant during Shakespeare’s time, with the crisis in Church authority (the split between Catholicism and the Protestant Reformation). McGinn says this skepticism is evident in Midsummer Night’s Dream, Hamlet, and Othello. Further, McGinn remarks that Shakespeare’s tragedies “often revolve around the tragedy of knowledge itself” (p. 8). There is no doubt that Shakespeare was heavily influenced by the essays of French aristocrat and author, Michel Montaigne, says McGinn, who also indicates that some of Shakespeare’s ideas in his plays relate to those of later philosophers like David Hume, and even such modern commentators as Harold Bloom.

The nature of the self is examined in great detail in Hamlet, Macbeth, and King Lear. These title characters are elusive personalities who transform before our eyes. McGinn finds that madness is another of Shakespeare’s concerns, being a “kind of psychological metamorphosis” (p. 10). Sleep, dreaming, and death also intrigued Shakespeare, asserts McGinn, relative to questions of self. Many of Shakespeare’s principal characters suffer self-deception, as in King Lear, Othello, and Macbeth. As to causality (why do things happen?), in Shakespeare’s works, according to McGinn, things are unruly, paradoxical, unpredictable, blind, and unintelligible. He states that Shakespeare’s tragic vision “shocks us out of our causal complacency” (p. 15).

Midsummer Night’s Dream carries the theme of dream skepticism—how difficult it is to distinguish dreaming from wakefulness and illusion from reality. Regarded as Shakespeare’s first great play, Midsummer Night’s Dream deals with interactions of fantasy. McGinn finds this play free in structure and wholly original (not based on any prior story or dream). In this play, “everything is subject to doubt, nothing is certain” (p. 22). The theme of personal transformation is also evident: characters mutate and transform throughout the play, and doubts about personal identity abound. Insanity, love and sex, acting, and imagination also transform characters in the play. To McGinn, the interaction between perception and imagination is one of Midsummer’s central themes.

Hamlet is about the constitution of the self, with McGinn asserting that “The self is more like the beads on a string than the string itself” (p. 38). With the appearance of the ghost, the issue of identity is both “concise” and “elusive” (p. 40). The play contains numerous accidents/reversals, but at the core, it is the mystery of Hamlet’s character that most concerns and entertains us. Is he a dreamer or a murderer; is he mad? Hamlet is impossible to pin down. The way out of Hamlet’s melancholy is to play a part, which McGinn calls the “theatrical conception of the self” (p. 45). McGinn likens Hamlet to a performer who lapses into despondency when he’s without a stage. By the end of the play, Hamlet “finally succeeds … he finds a part he can play” (p. 48). Hamlet’s inability to act is his predicament. “To be or not to be”—the play’s most famous line—is also one of literature’s most quoted. Hamlet also speculates about dreaming death, which McGinn says indicates Hamlet is “certifiably sick in the head” (p. 55). McGinn concludes that Hamlet and Shakespeare are realists, stating that Shakespeare “believes in the reality of things we cannot comprehend” (p. 57). As Hamlet dies at the end of the play, he exhorts Horatio to tell his story. Why, asks McGinn, before he answers that Hamlet’s whole life was a play. “He can conceive of himself in fictional terms. He can be only when he occupies a role” (p. 60).

Othello covers the theme of error and epistemological anxiety, especially regarding the minds of others. This is a story of deception and derangement centering on the question: how can you ever know what’s really going on in other people’s minds? We make guesses based on observation of external behavior, but inferences are fallible and flawed. Language, similarly, is often used to deceive and thus serves as a barrier. In Othello, Iago constantly deceives and Othello misreads language, actions, and his own inferences of what’s going on in Iago’s mind. Action and deception (or lying), says McGinn, “are closely related skills” (p. 66), and this is a “deeply philosophical play” (p. 67). Deception runs throughout the play, along with the elusiveness of truth. McGinn points out that the play’s central tragedy is “the tragedy of knowledge itself” (p. 70) and concludes that “Othello’s enemy was as much his own unruly mind as the deceiver Iago” (p. 79).

On the face of it, Macbeth is a play about ambition, revenge, and power. It is, as McGinn states, akin to today’s action-thriller stories, yet the play is also rife with philosophical themes: the relationship between character, the power of imagination, the appearance/reality distinction, and the nature of time. Initially, Macbeth is not a murderer, but once he slays King Duncan, subsequent evil acts and madness become easier. By play’s end, Macbeth is “a vicious tyrant, loathed by his subjects, steeped in guild and blood–an absolute bastard” (p. 92). Shakespeare shows the audience how evil actions, undertaken for self-interest, “have consequences for the psyche of the agent” (p. 93). Macbeth, a very complex character, has a conscience, unlike Iago in Othello, and Macbeth’s conscience overcomes him. McGinn observes that where Hamlet’s being is nothingness, Macbeth’s being is doing. Macbeth is also vulnerable to the power of his own imagination.

McGinn argues that King Lear examines man in nature and at the limits of his being and non-being. It is a play about nothingness, cruelty, and things out of place. In this play, McGinn states, “Shakespeare is distilling tragedy to its bare existence” (p. 116). There are no supernatural elements in the play, no ghosts. Lear’s world is one of mindless causality and evil-minded characters. Evil, it seems, is rampant throughout the play, but there’s also the opposite—good. The play is about Lear’s arc from “confident ignorance to hard-won insight” (p. 128). Concluding his analysis of this play, McGinn states Shakespeare felt it was better to accept ignorance than to “bandy pseudo-scientific explanations” (p. 133).

Generally agreed to be Shakespeare’s last play, The Tempest (written about 1610), is structurally similar to Midsummer Night’s Dream, which he wrote at the beginning of his playwriting period. Both concern a father marrying off a daughter; both occur in a magical or enchanted place, and both feature humans who are mostly lost and foolish, with delusions, powerlessness, and belief in magic. The difference between the two plays is that Midsummer Night’s Dream focuses on the theme of the power of imagination, while The Tempest is all about the power of language, connected with magic. Despite the title, McGinn contends that the “tempest” referred to is more the “storm of speech… [that] constitutes so much of human life” (p. 136). The meaning of sounds (language) is what determines their imprint on the mind, with speech being a kind of causal influence. Language in the play also helps create its own world. McGinn offers that language has ambivalence: it can illuminate and deceive. Since this was Shakespeare’s last play, McGinn wonders whether the message the Bard intended to convey was that the time for silence had come. Overall, McGinn says The Tempest is an “allegory of the solitary artist’s mind and its inner architecture” (p. 147).

This well-written book examines Shakespeare and the principal characters from six of his plays (two comedies and four tragedies). It is obvious that McGinn, himself a philosopher, clearly delights in relating philosophical aspects of Shakespeare’s vivid characters, their actions, and their world. Easy to digest, the book is a terrific addition to scholarly works on perhaps the world’s best-known playwright. For anyone who seeks to find deeper philosophical meaning in Shakespeare’s works, there’s no better source than McGinn’s Shakespeare’s Philosophy.