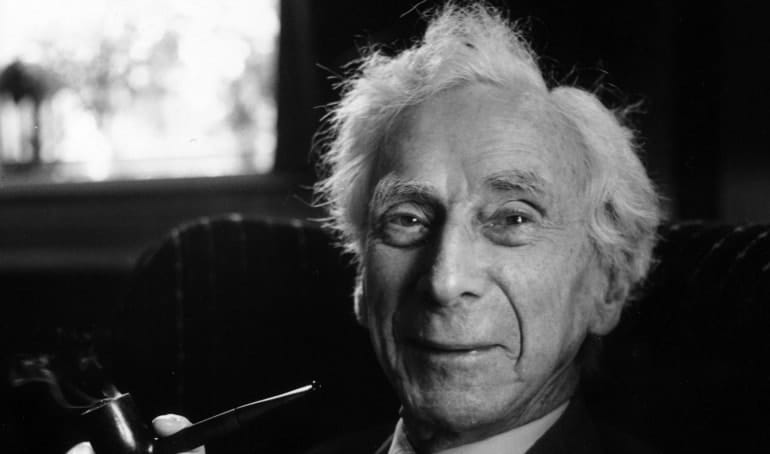 A British philosopher, logician, and mathematician, Bertrand Russell (1872 -1970) made significant contributions to the fields of mathematical logic, analytic philosophy, metaphysics, ethics, and epistemology.  He also wrote extensively on a wide variety of subjects in science and the humanities, and in 1950 he was awarded the Nobel Prize in Literature.

Avrum Stroll is Research Professor of Philosophy at the University of California, San Diego, and the author of numerous books, including Twentieth-Century Analytic Philosophy and Skeptical Philosophy for Everyone.

Simply Charly: Russell was considered to be a true Renaissance man, a polymath who wrote voluminously on a wide variety of topics. However, many feel he dissipated his talents by writing on so many different topics. Do you think Russell’s impact on philosophy would have been better served if he continued to expand his work on logic?

Avrum Stroll: Russell was indeed a first-rate philosopher and a prolific writer. He wrote more than 70 books (some of them simply renamed, but his original writings are nonetheless voluminous); Ray Monk has estimated the number of papers and articles he wrote to be well over 2000. Others have even larger numbers for the papers: I have heard that he wrote as many as 4000, but I am not a bibliographer and have never counted them. I think despite what Wittgenstein said (see question 7) that Russell’s non-logical work was at least as important as his work in logic. Such essays as “A Free Man’s Worship”—just one among many—have stimulated many readers to rethink their lives in the light of Russell’s Voltaire-like enlightened views. I think such books as “Unpopular Essays,” “Marriage and Morals,” and his writings on the experiments in Russia and China have greatly affected intelligent readers. To discount these works is to do a disservice to an original, influential, and exploratory mind, one that expresses an enlightened, rationalist, and mildly skeptical view of the world.

SC: Russell sought to erect our knowledge of the world on the firm foundations of mathematics and logic. Yet Wittgenstein argued that there could be no complete foundation for human knowledge, whether in mathematics or other domains. Do you agree with Wittgenstein?

AS: I think this question misrepresents both Russell’s views and those of Wittgenstein. Russell, as an epistemologist, was a kind of Cartesian, looking for basic data that were both certain and informative of external reality. Wittgenstein was less interested in knowledge than in certainty. His last notebook, entitled by editors, is called “On Certainty” and is directed toward distinguishing objective certainty from subjective certainty (see entries 194 and 195 in O.C.). He also said that knowledge and certainty belong to different categories (308 in O.C.), and though he described both, his main interest, at least in his later writings, was on certitude.

SC: Can you explain, for those of us who are mathematically challenged, the famous conundrum known as Russell’s paradox?

AS: Russell’s paradox is a complex subject to write about. He discovered the paradox in reading through the second volume of Gottlob Frege’s Grundgesezte. Frege had assumed in his Axiom V that every concept had a corresponding class that was its extension. Russell’s paradox is a counter-example to this claim. Frege tried to repair the defect but failed. Here is a somewhat shortened version he wrote in a Postscript to Vol. 2, dated Oct. 1902:

In its original form, Russell’s paradox depended on what is called the theory of types. According to that formulation, sentences can be arranged in an ascending order of scope, so the theory of types rules out such sentences as “All rules have exceptions,” as belonging to the class of rules that have exceptions. It thus rules out K as referring to itself, and thus solves the paradox. Unfortunately, the theory of types has manifold difficulties, which are too complicated to explain briefly, and is no longer accepted by most logicians. Even Russell realized that it was ad hoc and was mainly directed toward undermining Axiom 5. I think—and this is a long story—that the paradox stems from the unrestricted use of “all” as a concept; and hence rules out the possibility voiced in the Judeo-Christian conception of the deity that God is omniscient, omnipotent and wholly benevolent. One can see that Russell’s paradox rules out the possibility of such a God by asking whether God is wise enough to make a box that He cannot pick up. But the answer only scratches the surface of the possible descriptions and answers to the paradox.

SC: Why was it important for Russell to defend logicism, the view that all of mathematics is reducible to logic?

AS: This is another complex question. A short, but unsatisfactory answer, is that Russell, like many logicians and mathematicians of the period, thought that logic was more fundamental than mathematics and that if mathematics could be reduced to logic that would show that it was intellectually defensible. The Gödel theorems showed that the reduction was impossible, namely, that one could not capture all mathematical theorems in a formal logical system.

SC: Russell’s program of reducing mathematics to logic was anticipated by German mathematician Gottlob Frege several decades earlier. Was Russell aware of Frege’s work when he was writing Principia Mathematica?

AS: There is considerable confusion in the literature about the logistic thesis, as Frege understood it.  He wished only to show that arithmetic could be reduced to logic; in the Principles of Mathematics (1903), Russell tried to generalize this result and attempted to show that all of mathematics could be reduced to logic. On p.99 of the Foundations of Arithmetic (translated by J. L. Austin), Frege says clearly: “Arithmetic thus becomes simply a development of logic, and every proposition of arithmetic a law of logic, albeit a derivative one.” In the second lecture on logical atomism, Russell expressly says:

When Russell and Whitehead collaborated on Principia Mathematica (1910-1913), they attempted, probably under the influence of Russell, to show that all of mathematics could be reduced to logic. They attempted to show this by formally deriving Peano’s Postulates which they incorrectly thought uniquely defined the natural numbers. They presupposed that number theory is the basis of mathematics, and their efforts were accordingly directed to capturing Peano’s five postulates in a wholly logical notation.

SC: Politics remained an abiding interest for Russell throughout his entire life. Do you feel this was because he descended from a family that was very active in politics?

AS: Russell’s grandparents were very interested in politics. His grandfather was, of course, Prime Minister of England.  It is an interesting question of whether their influence contributed to Russell’s abiding interest in political questions. I don’t know the answer, but I would guess—it is sheer speculation—that Russell’s interests in politics derived from other factors.

SC: Wittgenstein once said of his former mentor’s work: ”Russell’s books should be bound in two colors, those dealing with mathematical logic in red—and all students of philosophy should read them; those dealing with ethics and politics in blue—and no one should be allowed to read them.” Do you agree?

AS: I think Wittgenstein’s judgment that students should not be exposed to his moral and political works is superficial.  See the answer to question 1—my view is that Russell’s non-logical writings were at least as important as his technical writings. Except for his later version of the theory of descriptions, most of his writings on formal logic have now been superseded, and with the possible exception of Introduction to Mathematical Philosophy are not regarded as particularly important. Historically, of course, Principia Mathematica and Principles of Mathematics, had an enormous influence on both philosophy and logic.

SC: In My Philosophical Development, Russell writes: “I admired Wittgenstein’s Tractatus, but not his later work, which seemed to me to involve an abnegation of his own best talent very similar to those of Pascal and Tolstoy.” Why do you think Russell dismisses Wittgenstein’s later work when it’s widely accepted today as the more enduring work?

AS: Russell became a kind of crank. Like Rudolf Carnap, he did not understand that Wittgenstein’s later philosophy was highly original and deep.  I suggest that readers take a look at the recent writings of Prof. Daniele Moyal-Sharrock that go deeply into these matters.

SC: What would you say is Russell’s most important contribution to philosophy?

AS: This is a personal opinion. I think that as a straight epistemologist, Russell’s views mostly combine forms of empiricism deriving from David Hume, John Locke, and mathematical logic. They were influential on the positivists and authors like W. V. O. Quine and his students. Like Quine’s work, Russell’s theories don’t break much new ground. I think, in contrast, that his version of the theory of descriptions, both as a straightforward piece of logic and its relevance for recent attempts to develop a systematic theory of meaning, have had an enormous influence on writers like Ruth Marcus and Saul Kripke, as well as others who hold variants of the direct reference thesis about proper names and natural kind terms. In the long run, I think arguments developed by A. P. Martinich of the University of Texas show that direct reference theories are not correct; and his counter-arguments are. But that is a long story in its own right—too extensive to be discussed here.

SC: In a field known for dense writing, your collaboration with fellow philosopher Richard Popkin has resulted in some of the clearest expositions of philosophy. Do you feel Russell’s writings may have had an influence on your own style of writing?

AS: The history of my writing style is lengthy and should be differentiated from that of the late Richard Popkin, who wrote in a very direct manner and effortlessly. I don’t think any philosophers have influenced my style. I admire Russell, A. J. Ayer, J. L. Austin, Zeno Vendler, John Searle, and others; but I think none of these authors has had much of an influence on me.  As I look back at possible precursors and influencers, I recall that when I was in high school, I was a sports reporter for the Oakland Tribune, a newspaper in the Bay Area.  I think my writing reflects that experience. It is simple and colloquial in its efforts to be clear and to explain complicated matters in a straightforward way. Whether I have succeeded is a matter I leave to history and to the critics.