MAIN MENU
Federico Fellini Film Interview
One of the most creative and idiosyncratic filmmakers of the 20th century, Italian director Federico Fellini (1920-1993) has been widely acclaimed for his imagery and artistry. His distinctive and personal style propelled him to fame with classics such as La Dolce Vita (1960). Four of Fellini’s films won Oscars as best foreign film: La Strada, The Nights of Cabiria (1957), 8 1/2, and Amarcord (1973). 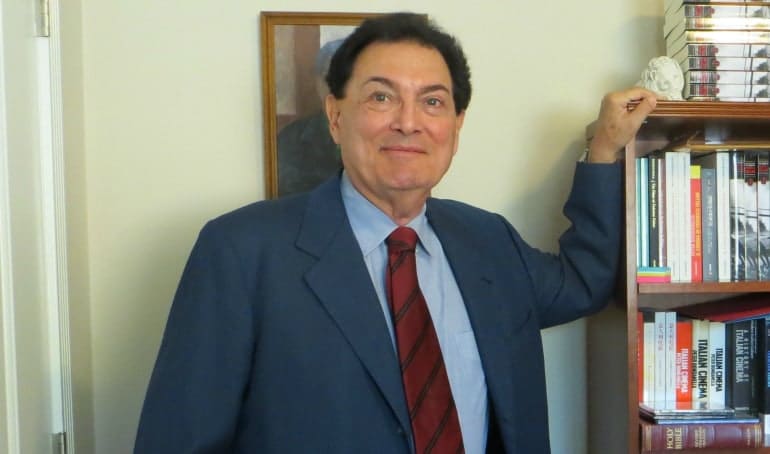 One of the most creative and idiosyncratic filmmakers of the 20th century, Italian director Federico Fellini (1920-1993) has been widely acclaimed for his imagery and artistry. His distinctive and personal style propelled him to fame with classics such as La Dolce Vita (1960). Four of Fellini’s films won Oscars as best foreign film: La Strada, The Nights of Cabiria (1957), 8 1/2, and Amarcord (1973).

A renowned Fellini expert, Peter Bondanella is a Distinguished Professor of Italian and Comparative Literature at Indiana University in Bloomington IN. He is the author of several books, including The Cinema of Federico Fellini (1992), and Pulitzer Prize-nominated The Eternal City: Roman Images in the Modern World (1987).

Simply Charly: How did you become interested in Italian cinema in general, and in Federico Fellini, in particular?

Peter Bondanella: I received a master’s degree in Political Science from Stanford and a doctorate in Comparative Literature from the University of Oregon with a Renaissance and Italian concentration. Unfortunately, I was never able to take a course on film in general or on Italian film, in particular since those courses just did not exist where I studied. While working on Italian Renaissance literature (Machiavelli, in particular), I felt that I needed something contemporary to keep me informed of what was going on in Italy. I was fortunate enough to have a research grant from the National Endowment for the Humanities in 1974 that took me to Paris, where I managed to see about 50 Italian films in six weeks. Believe it or not, I met Fellini through a course I offered on his films at Indiana University. Seated in the audience at a screening was an acquaintance of Mario Longardi, Fellini’s longtime publicity agent. After my first book on Fellini, a collection of essays for Oxford University Press released in 1977, Mario arranged for me to meet Fellini. I went out and splurged on a new Italian linen outfit, and Mario sent a Mercedes limo to my hotel to take my wife and me out to Cinecittà, where Fellini took us up into the hills outside Rome for a wonderful meal. Of course, he was absolutely charming, and I still have a photograph of the meal in my office. After that time, I began extensive work on his cinema and eventually managed to convince Fellini and his scriptwriter Tullio Pinelli to give Indiana University a group of very important manuscript materials. Housed at the Lilly Library of Rare Books in Bloomington, they now constitute the largest collection of such material outside Italy. That material enabled me to write a major intellectual biography of Fellini’s life and works for Princeton University Press, a book that Fellini graciously prefaced.

SC: What aspect of Fellini’s work, personality, and vision did you (and still do) find the most intriguing and fascinating?

PB: Another adjective employed to describe Fellini’s style is “baroque.” Baroque or Felliniesque both point to a richness of Fellini’s imagery, a willingness to give us ten great visual ideas when one would be sufficient just to narrate a story. Fellini tells stories with images, not with words. And these images, when successful, connect to our subconscious in a way that transcends barriers of culture or language.

SC: It is said that Fellini’s childhood exposure to carnivalesque characters such as clowns and vaudevillians has shaped his imagination and films, and that he was among the most intensely autobiographical film directors. However, he was once quoted saying: “I have invented myself entirely. A childhood, a personality, longings, dreams, and memories, all in order to enable me to tell them.” So the question is, are Fellini’s films purely autobiographical or tinted with fiction?

PB: No artist can escape his or her autobiography. But Fellini always hated the reductive arguments employed by critics who try to identify some biographical cause for his works. For example, Fellini himself did not attend the kind of Catholic school that causes Guido, the film director-protagonist of 8½, so much difficulty. Nor were the adventures of a young adolescent boy in Amarcord his experiences (Most of them came from the life of one of his childhood friends, a lawyer who is still living in Rimini). He was first and foremost a storyteller, and what he narrates comes from a combination of his own experiences, his imagination or fantasy, and what he has gleaned from others. Other films are important to him but much less so than for such postmodern directors as Quentin Tarantino, whose work often represents a collection of citations from all sorts of films he has enjoyed during his lifetime. There is no question, however, that both the circus and the variety hall theater were of enormous importance to Fellini’s artistic vision. The old story about Fellini as a young boy running off to join a circus is most certainly false (just another of the stories Fellini liked to tell journalists looking for material that would spice up an interview), but both the circus and variety hall entertainment share an important trait: variety. You generally have three rings in a circus, with acts frequently changing, and in vaudeville, you have constant change and a shift from one kind of entertainment to another in rapid succession. Fellini, I believe, felt that a good film should do the same thing: keep the audience on its toes with lots of different sequences, not necessarily arranged in a logical order, so that the ultimate result would be entertainment, not ideological arguments. As Fellini often said, he did not want to demonstrate anything; he wanted to show it through images. Unlike most directors, whose films are primarily inspired by other films, Fellini’s films were primarily inspired by his active dream life.

SC: Was there anyone Fellini drew inspiration from, or did he blaze his own trails entirely?

PB: Fellini certainly learned a great deal from Roberto Rossellini, but not film style. What he learned from Rossellini was that the crucial thing in filmmaking was a vision, to see one’s story in images rather than words. Moreover, he learned from Rossellini that an artist should not be intimidated by technology. Actually, Fellini was probably more influenced by early American cartoon artists Winsor McCay’s Little Nemo cartoon series and Frederick Burr Opper’s Happy Hooligan cartoon series than by any single film director, except for Rossellini. The character Happy Hooligan was a precursor of Chaplin’s Little Tramp character, and both Opper and Chaplin formed Fellini’s idea of what would eventually become Gelsomina in La Strada and Cabiria in The Nights of Cabiria, both played by his wife, Giulietta Masina. McCay was important because his cartoon figure Little Nemo began each new and fantastic adventure by dreaming, and dreams were always the source of Fellini’s inspiration. From the time he was a small child, he drew cartoons and caricatures. He was a precocious cartoonist and used his sketches to construct every film he shot.

SC: Fellini was friendly with Roberto Rossellini, another great Italian director. What was his relationship with and view of other idiosyncratic filmmakers of his era, for example, Ingmar Bergman?

PB: Fellini generally never said a bad word about other directors, although the same cannot be said about his colleagues in his regard. About the closest he came to a negative remark was in response to Rossellini’s critique of La Dolce Vita. Obviously jealous over the attention lavished on his former pupil, Rossellini allegedly said that it was the work of a provincial, a dismissive remark that Luchino Visconti must have agreed with since he apparently said the film was something that might have been made by an aristocrat’s servants peering through a keyhole. Fellini’s response, I think, was most revealing: before a metaphysical reality, he noted, we are all provincials. Generally, he admired anyone-Bergman, Buñuel, Antonioni, and, of course, Rossellini-who had a personal vision and knew how to express it in film.

SC: Fellini was quite influenced by the teachings of Carl Jung. In what way did Jung’s philosophy impact Fellini’s work?

PB: Fellini’s encounter with Jung’s work and Jungian analysis in the late 1950s encouraged him to have confidence in his own dreams. Unlike Freudian psychology, which according to Fellini tended to see dreams as a form of neurosis, Jung’s view of dreams was more conducive to the work of an artist, since it tended to underscore the creative potential of dreams. Under the advice of a Jungian analyst, Ernst Bernhard (1896-1965), Fellini began to sketch his dream life and eventually compiled at least two huge notebooks, copiously illustrated with commentary that has just been published in a facsimile edition. Many of Fellini’s films from this period to the end of his life were directly linked to his attempt to use his dream life as an inspirational source for his films. Perhaps 8½, Juliet of the Spirits, and The City of Women are the three films that most completely represent Fellini’s debt to Jungian psychoanalytic ideas.

SC: Is anyone today making movies in a style similar to Fellini’s?

PB: Fellini’s impact upon filmmakers has been enormous (he has always been more popular among directors than film critics). Martin Scorsese based the protagonist on the brutish Zampanò of La Strada; his breakthrough film Mean Streets owes a huge debt to I Vitelloni, and he even did a version of the conclusion of 8½ in one of his early student films. Without Fellini, we would not have Bob Fosse’s Sweet Charity (an adaptation of The Nights of Cabiria) and All That Jazz (a version of 8½), Woody Allen’s Stardust Memories, Peter Greenaway’s 8½ Women, or Spike Jonze’s Adaptation—all indebted to 8½. Nor would we have the musical Nine. Any time a film director decides to speak of the art of cinematic creation, he or she will inevitably have to come to terms with Fellini.

PB: I can only say that American audiences have always supported Fellini’s work very generously. I have taught Italian cinema courses for three decades, and Fellini’s films were always the most popular among college students, even those who hated subtitles and were not at all interested in foreign films in general. Fellini spoke to audiences across language and cultural barriers because he connected with a spectator’s subconscious.

SC: What is your own favorite Fellini film?

PB: I love three of them equally: 8½; La Strada; and Amarcord. Each film employs a different style and represents a different stage of Fellini’s career, but they are all unforgettable and deeply moving in ways that are difficult to analyze in solely logical terms.