The words “Romantic poetry” often conjure up some rather trite and delicate notions of dreamy, indolent writers wandering amid hazy fields of goldenrod, reveling in their withdrawal from the real world, quill pens aquiver in dawn’s dew-kissed reverie. But such a mistaken conception does damage to the writers of the Romantic era—and to us. Romantic poetry was more incendiary than flowery, a dangerous and dark recalibration of humanity’s relationship to the physical—and social—spheres, and its practitioners were among the more daring (and threatening) public figures of the nineteenth century. Odd then that a writer like John Keats has come to be seen as a sedate, dreamy opium-eater when in fact he was a brawler in every sense of the word: poetically, politically, and yes, physically.

The excavation of that Keats is one of the rewards of Nicholas Roe’s John Keats, a thoroughly researched biography that gives us the juvenile brawler, unflinching medical student, long-distance hiker, and occasional over-imbiber of everything from port wine to mercury (which he was taking to treat the symptoms of venereal disease which he likely contracted from a prostitute). Keats, whom Roe says “always lived on the edge,” was no shrinking violet.

Roe, a professor of English Literature at the University of St. Andrews and respected critic of the period, resurrects a vibrant Keats, though it’s clear the poet was weighed down from an early age by the specter of early death in his family (father, mother, brother). And while many readers associate Keats with Classical myth (the stories of which supplied him with many of his greatest works), Roe reveals how the poet mythologized his own upbringing, the contours of his mature poems formed in the poet’s parsing of the geography of his boyhood:

Keats, like many contemporary poets and painters, would be drawn to boundaries and limits, beaches, bridges, clifftops, caverns, autumnal mist and darkling dusk, alert to motions of ebb and flow in streams, sky, and sea in his own nature … The northern suburbs of London were where Keats’s life as a poet began and where much of his greatest poetry would be written.

The labyrinths of his suburban London boyhood gave him the physical geography for his work, but it was the shadows of mortality that gave him the psychic landscape he would return to, again and again. Roe makes a compelling argument for the devastating and lingering impact that the death of Keats’s father had on the poet—a cloud under which the young boy would never escape. That blow, coupled with his mother’s rapid re-marriage, left the nascent poet dazed and insecure, “wounded and rejected, his whole world overturned.”

Roe’s Keats toughs it out though, fighting his way (literally) through private school until he finds in art the constancy his own life always seemed to lack. But that immersion in art couldn’t overcome the poet’s self-conception as a failure—as a lover, medical man, and poet, and though he lived vigorously in his quarter-century of life, he died convinced he was a creature “blasted by an unlucky star.” 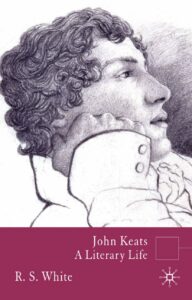 Keats’ debt to the past—the classical past, or his own—remains a rich source of critical inquiry. R. S. White, Australian Professorial Fellow and Winthrop Professor of English and Cultural Studies at the University of Western Australia, finds little overt mention of Keats’s own youth in the poems, making his John Keats: A Literary Life, a useful counterpoint to Roe’s work. White argues that “Keats reveals very little information, or even curiosity, about his childhood,” in a wide-ranging first chapter that rehearses the familiar biography while addressing British politics at the time, social hierarchies in London, and—what will become a keynote in Keats’s life, “the most common ailment … infection of the lungs evidenced in coughs, asthma, and consumption,” which would prove fatal to the poet.

Like Roe, White finds the young Keats to have been “far from effete or timid,” citing his “violent and ungovernable” behavior in his early youth (and his interest as an adult in boxing). White doesn’t spend as much time as Roe parsing what happened to Keats between 1816 and 1817 to make him forsake medics for poetry, but he’s comprehensive and detailed in his discussion of Keats the medical student (it’s the longest chapter in the book), exploring in depth the medical textbooks Keats would have relied upon in his studies. White suggests Keats might have been put off the medical life by the attitude of one of his books, a popular standard text urging doctors to divorce “feelings” from their practice: “The surgeon is deaf to the pain of his patient; he is insensitive to their expression, and forgets his present anguish … Real sensibility knows how to control the feelings and consists in a principled self-denial of present ease.” As posterity discovered, that simply wasn’t Keats.

White finds in much of Keats’s later poetry the echoes of the chemistry, botany, and “physic” textbooks he read during his medical apprenticeship—an immersion that also impacted his thoughts about the opposite sex:

These branches of study suggest to me Keats would have been more knowledgeable about social and sexual realities … as a medical student he would have learned much more about female sexuality than most young, unmarried men of the time.

White’s work makes excellent use of Keats’s letters to help establish the poet’s frame of mind as he penned some of the most beautiful and revered lines in the English poetic canon, and he does a superb job of bringing to life the final days of the then-consumptive poet, a “heroic shouldering aside of physical adversity as an embracing of transcendent, posthumous immortality.” 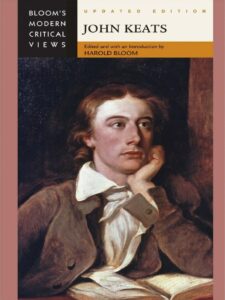 The source of that transcendence fuels the eclectic inquiries featured in John Keats (Bloom’s Modern Critical Views), one of the almost hundred such author-focused critical overviews edited by the eminent literary critic and Yale professor Harold Bloom. And, like most of the volumes in the series, this one is as wide-ranging as it is useful. Bloom begins by describing Keats’s struggles with Milton and Wordsworth (one of Bloom’s principal contributions to literary criticism has been his decades-long development of the idea of a poet’s “agon,” the struggle every major writer must engage in on the way to finding his or her own original voice). Claiming that for Keats “the hard victories of poetry had to be won against the more menacing values of poetic tradition,” his triumph—and his signal break with tradition—occurs in the poem “Ode to a Nightingale,” which is “the first poem to declare, wholeheartedly, that Death is the mother of Beauty.”

But Keats was myriad-minded, and his work incorporates multiple streams of literary influence, ranging from the Bible and Bacchus (as discussed in Jeffrey Baker’s “Nightingale and Melancholy”) to Dante (as explored in Marjorie Levinson’s “’Hyperion’ and ‘The Fall of Hyperion’”). All of the essays in the collection are well worth reading. Of particular note is Helen Vendler’s “John Keats: Perfecting the Sonnet.” Vendler is deeply acquainted with the sonnet (she’s written the single best guide to Shakespeare’s work in the form, The Art of Shakespeare’s Sonnets). In discussing Keats’s early facility with the sonnet, for example, she sagely notes that “He was perhaps intrinsically more a meditative poet than a narrative one, and the sonnet is irresistible as a flexible container for meditation.” The same could also be said of this valuable addition to Bloom’s Modern Critical Views.