Pharmacracy: Medicine and Politics in America 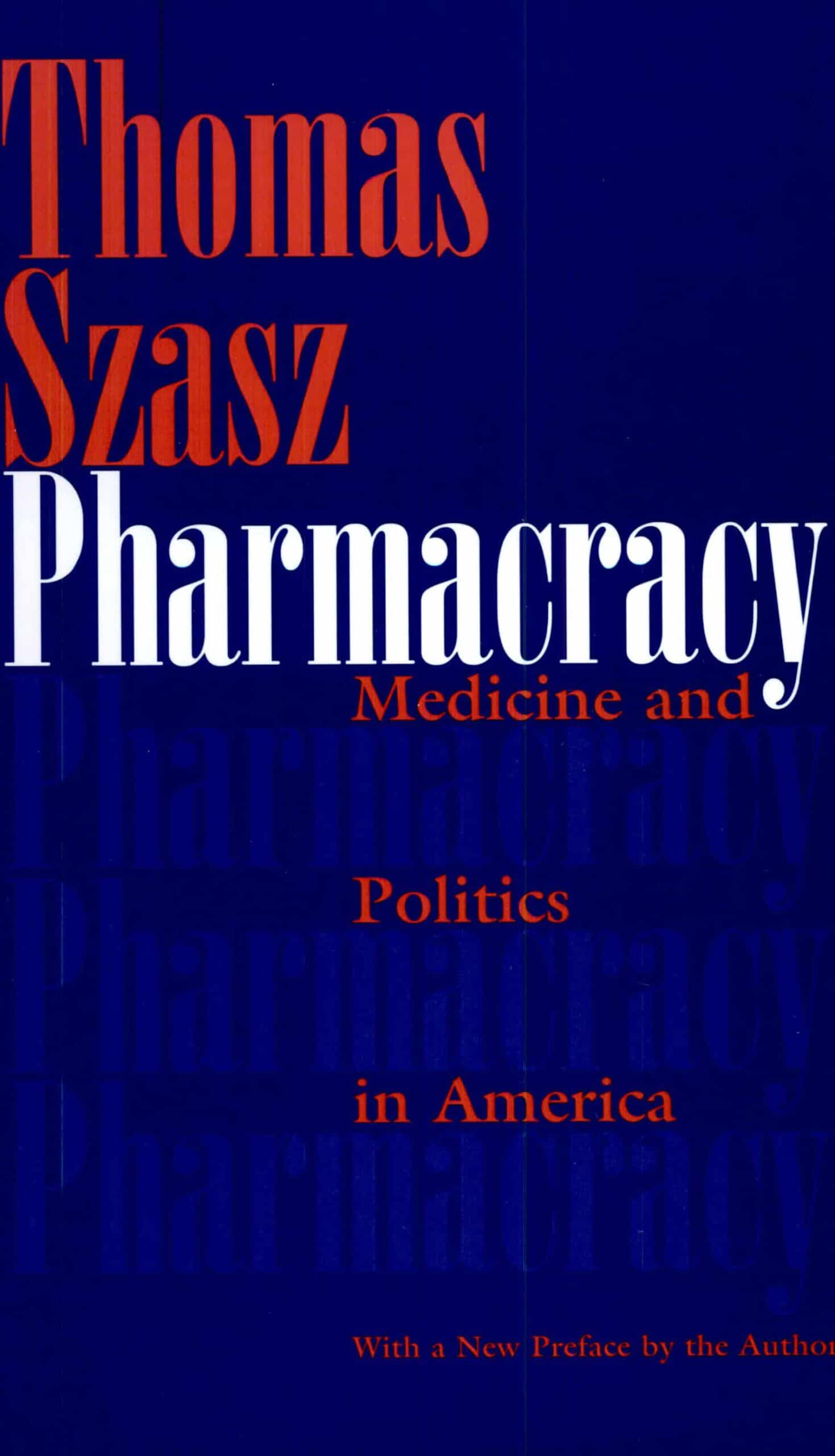 Pharmacracy: Medicine and Politics in America

Healthcare costs are out of control. More and more Americans are being diagnosed with depression, eating disorders, and other related illnesses. The dizzying expansion of genomics, neuroscience, and pharmacology is opening up new debates in medical ethics. The moment surely calls for a careful critique of the relationship between contemporary citizens and the institutions charged with their treatment.

Thomas Szasz’s Pharmacracy: Medicine and Politics in America performs a service by provoking dialog about the fundamental meaning of disease and the social implications of diagnosis. Broadly, it argues that American life is becoming altogether too medicalized, with the diagnostic/therapeutic paradigm reaching its tendrils further and further. This is something that is not merely paternalistic and expensive, Szasz argues. Rather, it threatens to undercut our civil liberties and the very concept of adult responsibility.

Szasz analyzes the perversities of a medico-governmental system in which treatment and power are conflated (The philosopher Michel Foucault discussed something similar in regard to his notion of biopolitics) Diagnoses, Szasz points out, have changed from descriptions used to clarify a patient’s condition, to a “strategic” token used in a game between various institutional players: lawyers, health insurance companies, profit-seeking clinics, employers, and bureaucrats in the welfare state. This is because diagnoses can determine everything from what services a hospital can provide, whether an employee qualifies for worker’s compensation or disability payments, to whether a criminal can be tried in court.

The conflicts of interest lie in the fact that doctors today are simultaneously entrepreneurs attempting to maximize their bottom line, and bureaucratic functionaries endowed with special authority. They determine what treatments patients are entitled to and even what social services they can claim. This can lead to manipulating diagnoses to increase reimbursements, shilling for unscrupulous pharmaceutical companies, and acquiescing to patient demands to treat diseases dreamed up these same companies.

The overall trend, Szasz argues, is towards diagnosis inflation: a spiral of more and more things being termed diseases, from bullying, fatigue, and social anxiety to kleptomania, drug abuse, and overeating. This absolves individuals and communities of moral responsibility, say for regulating eating or teaching proper schoolyard behavior, and leads to costly and invasive interventions by social workers, psychiatrists, and bureaucrats.

Many of these problems are legitimate and troubling. American healthcare is among most inefficient in the world, and the incentives for providers are undoubtedly out of whack. And it can hardly be a positive development that so many Americans rely on health care professionals to tell them how they should be feeling in relationships, to what they should serve for dinner, to how their kids should be behaving.

Yet it is hard to accept Szasz’s ultimate verdict, and also his proposed solution. He insists our emergency is so grave that something like an intellectual scorched earth strategy is necessary: The definition of disease must be retrenched only to include “somatic lesions,” that are “objectively” measurable by pathologists. In the process, the entire modern field of mental health and psychiatry—from Kraepelin and Freud onwards—must be dismissed as imaginary.

For one thing, Szasz’s warnings of slippery-slope fascism seem overblown. Just because a similarity can be found a contemporary practice and some aspect of what some Nazis did doesn’t make the analogy worthwhile. For instance, comparing a physician who falsely bills an in vitro fertilization that otherwise wouldn’t be covered insurance, to the corruption of the medical establishment in Nazi Germany, seems extreme. Moreover—death panels aside—there simply isn’t evidence provided of systematic coercion or violence in today’s healthcare.

Another problem is that it is unclear whether Szasz’s diagnostic standard is really sufficient for the practice of modern healthcare. Citing the 19th Century medical writer Rudolf Virchow primarily, with his concept of disease as “cellular pathology,” Szasz makes a bid to return disease to a solid, “materialist” foundation, purged of any social component whatsoever. Ironically, Virchow would hardly have supported the framework—he was an enthusiastic defender of public health, calling for “school hygiene,” and advocated for legal punishment to be “replaced with psychiatric education—“something antithetical to Szasz’s belief system.

The logic Szasz uses to establish his core claim about disease is not completely convincing. He compares the concept of disease to that of carbon, which “has specific physical properties that distinguish it from every other element.” “To the trained eye and informed mind,” Szasz declares, “disease is the same kind of entity as carbon…coal and diamond are two kinds of carbon, much as diabetes and diphtheria are two kinds of disease.“ Yet clearly, an intestinal parasite, AIDS, and Down syndrome are not materially the same thing! They are linked by their ability to disrupt desired social and biological functioning.

Szasz previously lauds the metaphor of human body as machine (and disease as its breakdown) as the fundamental advance enabling scientific medicine. But he doesn’t explore all the implications. A machine breaking down is not a physicochemical event with objective correlates. A machine is broken relative to what it should do. Moreover, unlike a blender or bicycle, a human being is not made to do anything in particular (unless you believe in creationism).

What we think a human should be able to do is in part socially conceived and negotiated. It is a target that always moves. Diagnoses naturally reflect this. For example, the valuable labels “asthma” and “osteoporosis” are based on expectations for respiration and aging and exist on continua, not as absolutes. This is an inherent feature of medicine, not a bug that could be eradicated.

Another frequent strategy of Szasz’s, pointing to the specter of malingering and responsibility avoidance, sometimes rings hollow. For instance, he goes as far as to call PTSD (a widely observed symptomatology) euphemistic for soldiers who don’t want to fight. However, it stretches plausibility that countless veterans, not to mention civilian survivors of violence, would falsify a consistent regime of debilitating flashbacks, nightmares, and anxiety simply in order to avoid life responsibilities. The ends don’t justify the means.

Similarly his dismissal of modern depression as trumped up “common unhappiness,” does not address the millennia of Western literature that has distinguished from everyday misery a pathological state of torpor and fear (whether described as melancholia, tristomania, or even the early-Christian “acedia”).

Now late in his career, Szasz has clearly thought a great deal about these issues; his ideas even summarized in introductory college textbooks. One might wish his discussion of mental illness were slightly more nuanced, his theoretical foundations a bit tighter. However, if fiery oppositional polemics are required to foreground pressing and fundamental issues about the American healthcare system, then it is a good thing that Szasz is here to write them.

Szasz previously lauds the metaphor of human body as machine (and disease as its breakdown) as the fundamental advance enabling scientific medicine. But he resists the implications of the analogy. A machine breaking down is not a physicochemical event with objective correlates. A machine is broken relative to what it should do. Moreover, unlike a blender or bicycle, a human being is not made to do anything in particular (unless you believe creationism).

What we think a human should be able to do is in part socially conceived and negotiated. It is a target that always moves. Diagnoses naturally reflect this. For example, the valuable labels “asthma” and “osteoporosis” are based on expectations for respiration and aging and exist on continua, not as absolutes. This is a feature of medicine, not a bug that could be eliminated.