You Never Forget Your First: A Biography of George Washington 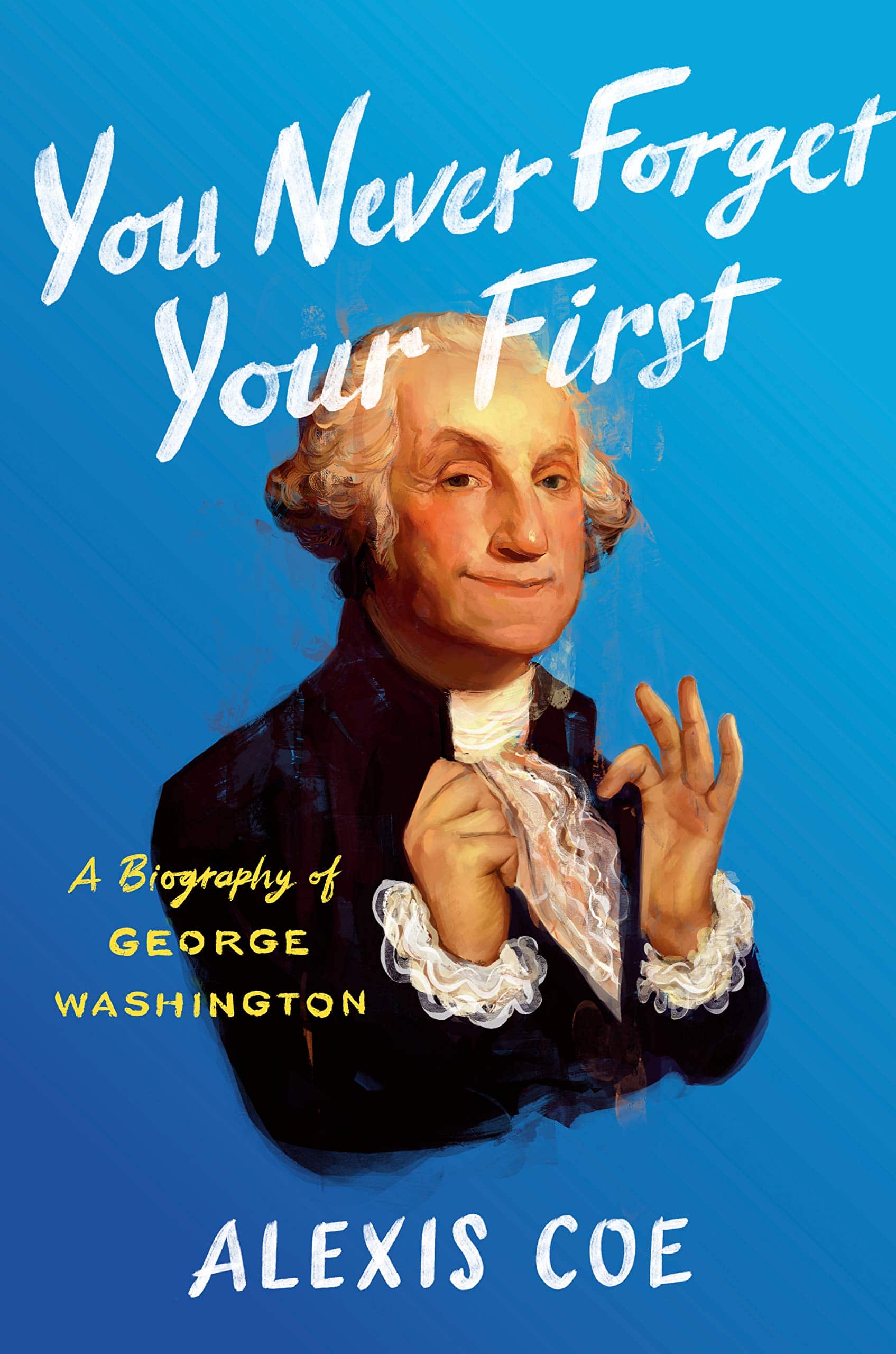 You Never Forget Your First: A Biography of George Washington

Alexis Coe, trained as a historian, and employed at various times by the Brooklyn Historical Society and as a research curator for the New York Public Library, levels her witty, iconoclastic book not only at George Washington but also at those legions of male biographers who have marbled the first President of the United States instead of fleshing out the person.

What we would like to know about Washington as a man has been kept from us by Washington and his wife Martha, who destroyed letters and tried to maintain him as a monument and upright example to us all. Previous accounts of his excellency, as he was called, provide some personal details as reported by his contemporaries, but for the skinny on the day-to-day Washington, Coe is your go-to biographer, starting with her first section: “George Washington At a Glance,” providing a catalog of revealing details—for example, a two-column array of “greatest hits” (“Raised, trained, and led a militia against the greatest superpower in the world”) and “Petty Acts” (“Took two impoverished girls to court for stealing from his clothes while he swam.”) By the way, those girls were whipped. We learn that Washington liked the circus but disliked idle talk, liked exotic animals, and disliked slapstick humor. Coe lists a load of lies some people still believe—like he had wooden teeth, he grew weed (it was hemp used for ropes, sails, and clothing). We learn about what he liked to eat (hoecakes swimming in butter and honey), the many diseases he survived (malaria, diphtheria, smallpox, and tuberculosis), the many kinds of animals he owned (including dogs, bison, and cattle).

A lot of this so-called “trivia” actually brings him alive. Coe admirably delivers what James Boswell called the “minute particulars” of the biographical subject. But I understand why other biographers have hesitated to dwell on such matters when there are wars to be won and nations to found. Coe gets to all that, too, but she is resolutely determined to rescue Washington from “The Thigh Men of Dad History,” as she calls biographers who gush about Washington whose thighs could grip a horse with such grace. Ron Chernow, in particular, comes in for a drubbing, since Coe, an excellent researcher, has consulted the primary sources and exposes Chernow’s romancing and his thin evidence for concluding that Washington’s mother Mary was a shrew. Although she could be quite independent and irascible, her role as a mother comported with the mores of the time and her vituperative nature is largely the construct of later historians and biographers.

Why “Dad history”? Well, isn’t that what presidential biographies are for—to give Dad a present during the holidays when he has time to read about great men who turn out to be aging male beauties? Coe explains that when she told people she was writing about Washington, they supposed her book was about his marriage or social matters, but not the kind of male-centric narrative that, well, men, not women, are supposed to write. Women biographers of Washington are in short supply.

George Washington
Washington retains a good deal of his aura and his accomplishments in Coe’s biography. Her effort is not to be read exactly as revisionist or debunking, although if you consult some of the comments on Amazon, you will see just how outraged some readers are when Washington emerges out of his paragon’s clothing. He could be a pretty mean spirited slaveholder who did not spare the lash, Coe shows, and even his much-vaunted freeing of his slaves was really a gesture that he left his wife to carry out reluctantly.

To be sure, Coe is out to bust up the Washington lobby, the male groupies who as boys visited Mount Vernon, the Washington shrine, and then grew up to perpetuate what has become in the popular consciousness an august founding father gathering tributes from John Marshall, Chief Justice of the Supreme Court (“the greatest man on earth”) and Woodrow Wilson (“All the land knew him and loved him for gallantry, and brave capacity; he carried himself like a prince.”) After that fanfare, which Coe includes in the epigraphs to her biography, she follows with this encomium from Brad Neely, a comic book artist in his YouTube video: “I heard that motherfucker had like thirty goddam dicks.” Not since Nigel Hamilton wrote JFK: Reckless Youth has a presidential biographer attempted to return his subject to planet earth after the elevations of court historians like Arthur Schlesinger, Jr.

An eighteenth-century term applies to take the measure of this biography. It is a study of character, an account of the man Washington became, not a psychological portrait of a man in the process of becoming. Here is an example from a chapter titled, “His Mother’s Son”: “Mary remained strategically close to her stepsons [by her deceased husband’s first marriage].” She made sure that George visited Mount Vernon often, the home of his father’s first family, to “observe elite masculinity up close.” Already a political being, she implies, he understood his “role.” He presented himself as a prodigy to be shaped. As Coe puts it, “His eagerness to be helped no doubt flattered their egos, and he became a kind of pet project.” Exactly what his stepbrothers thought of him cannot be said, but Coe deftly explains the context in which an ambitious young man could make himself of service to others and make them feel good about it. In due course, Washington would become the executor of his stepbrother’s Lawrence’s estate and would go on to marry well and present himself, always, as one in service to others as a way of serving himself.

Coe shows that Washington believed he could build a career and find his place in the world by observing a strict code of conduct, as specified in a book he studied, Rules of Civility & Decent Behavior in Company and Conversation, which included: “Do not laugh too loud or too much”; “Think before you Speak”; “Undertake not what you cannot Perform but be Carefull to keep your Promise.”