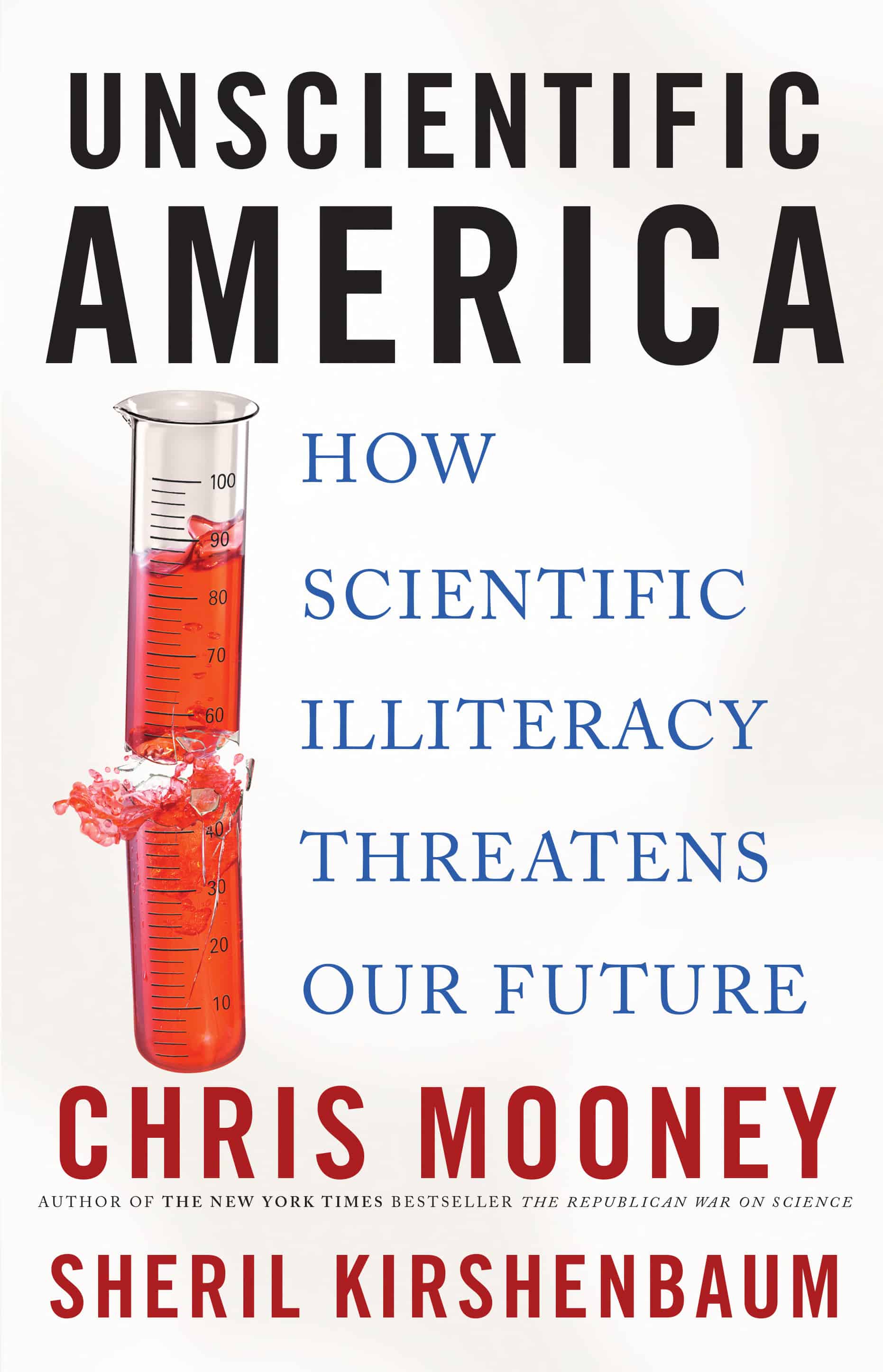 Written by Chris Mooney, author of The Republican War on Science, and marine biologist Sheril Kirshenbaum, Unscientific America addresses the disconnect between the country’s brightest minds and the political process that has so much power over funding and applications for new research. Rather than blaming the stupidity of the general populace or the neglect of the news media (slashing cutbacks notwithstanding), Mooney and Kirshenbaum issue a challenge to scientists themselves, asking researchers to become public intellectuals, “ambassadors” who will communicate their findings not only to other specialists but to the layperson as well (124).

Given the increasing specialization of academia today, especially in the sciences, such a task would require nothing less than a redefinition of the way that science is practiced and the reward structures that undergird it. Mooney and Kirshenbaum have suggestions: change the promotion and tenure process to include communication with the public as a worthwhile goal; include communications and English courses as part of the science education curriculum; close the “two cultures” gap between science and politics; and encourage scientists to act as advisors for science-related popular media. All of these worthwhile goals would give the science community a badly needed exposure in the public sphere, in a time when sound bites and blogs predominate.

The authors point out that according to the Project for Excellence in Journalism, an organization specializing in using empirical methods to evaluate and study the performance of the press, science, and technology coverage amounts to only one minute per five hours of cable news (6). Newspaper science sections get killed by attempting to lower the bottom line (two-thirds were eliminated between 1989 and 2005) (68). With the fragmentation and deregulation of television markets, and focus on special interest, niche science programs, shows like Walter Cronkite’s Universe and Carl Sagan’s science specials no longer have a place in mainstream TV. It’s no wonder that many people now believe that the earth is less than 10,000 years old (46% of Americans, according to National Science Foundation polls) and have no idea how much evidence lies behind anthropogenic global warming or the theory of evolution (44, 54, 149n).

The authors propose a long-term fight, independent of any given election cycle, and warn against complacency during the Obama presidency. While the return of a genuine advisory role for science is a welcome change, the administration has far too many things on its plate to contemplate an increase in funding for research or a more “reality-based” approach to problems facing society. It seems that “truthiness” is here to stay, and scientists must act quickly to strengthen their ties to society at large. The terms of debate in the public sphere will become more sound and nuanced only if scientists bring their expertise into their role as citizens and not check it at the lab door.

Unscientific America also includes within its purview (chapter 3) a history of the post-war relationship between science and society. Mooney and Kirshenbaum trace many American advances in research to funding fueled by the Cold War with the Soviet Union. The launch of Sputnik in 1957, for example, led not only to the Space Race but also to a need to demonstrate American pre-eminence across the various fields (or fronts) of research. The denouement of public interest in science began with the rise of the Religious Right in the 1970s and 1980s, which strengthened, within many quarters, beliefs in creationism. The authors do not simply blame right-wing activists for the problems facing scientists, but scientists receive, throughout the book, their share of the blame for sometimes deliberately withdrawing from the public sphere and counting on journalists to communicate their ideas for them.

One of the strongest parts of the book is the critique of the New Atheism of Dawkins, Dennett, and others (See Chapter 8, “Bruising their Religion”). Mooney and Kirshenbaum fault the New Atheists for rising to the creationist bait of pitting science against religion and reason against faith. In this black-and-white assessment of the mysteries of the universe, the New Atheists (not to paint with too broad a brush, because the movement is internally diverse) resemble their right-leaning foes by positing the either-or of God or logic. Most helpful is the distinction between “methodological naturalism”—the belief that only natural causes and events will be considered within science—and philosophical naturalism—the position “that all of existence consists of natural causes and laws, period” (103-104). Science commits one to methodological, but not necessarily philosophical, naturalism. A quote from Robert Pennock illustrates this point: “Science is godless in the same way that plumbing is godless” (104).

Overall, Unscientific America does a good job of diagnosing the problems facing public applications of science, and it also issues a compelling call to scientists to begin advocating for themselves. Non-scientists reading the book may find that it commits some of the same errors that it seeks to remediate: that is, despite its completely accessible tone, it speaks primarily to scientists and not to the general public. Those who care about science but are not themselves scientists may have to tweak the message for their own needs. Still, even the most casual reader will find the history and analysis helpful and will likely find new sources of science information in the unobtrusive endnotes. This book is a must-read for those who would like to see all public debates become more “reality-based.”

Assistant Professor of Philosophy at the University of South Carolina Aiken.