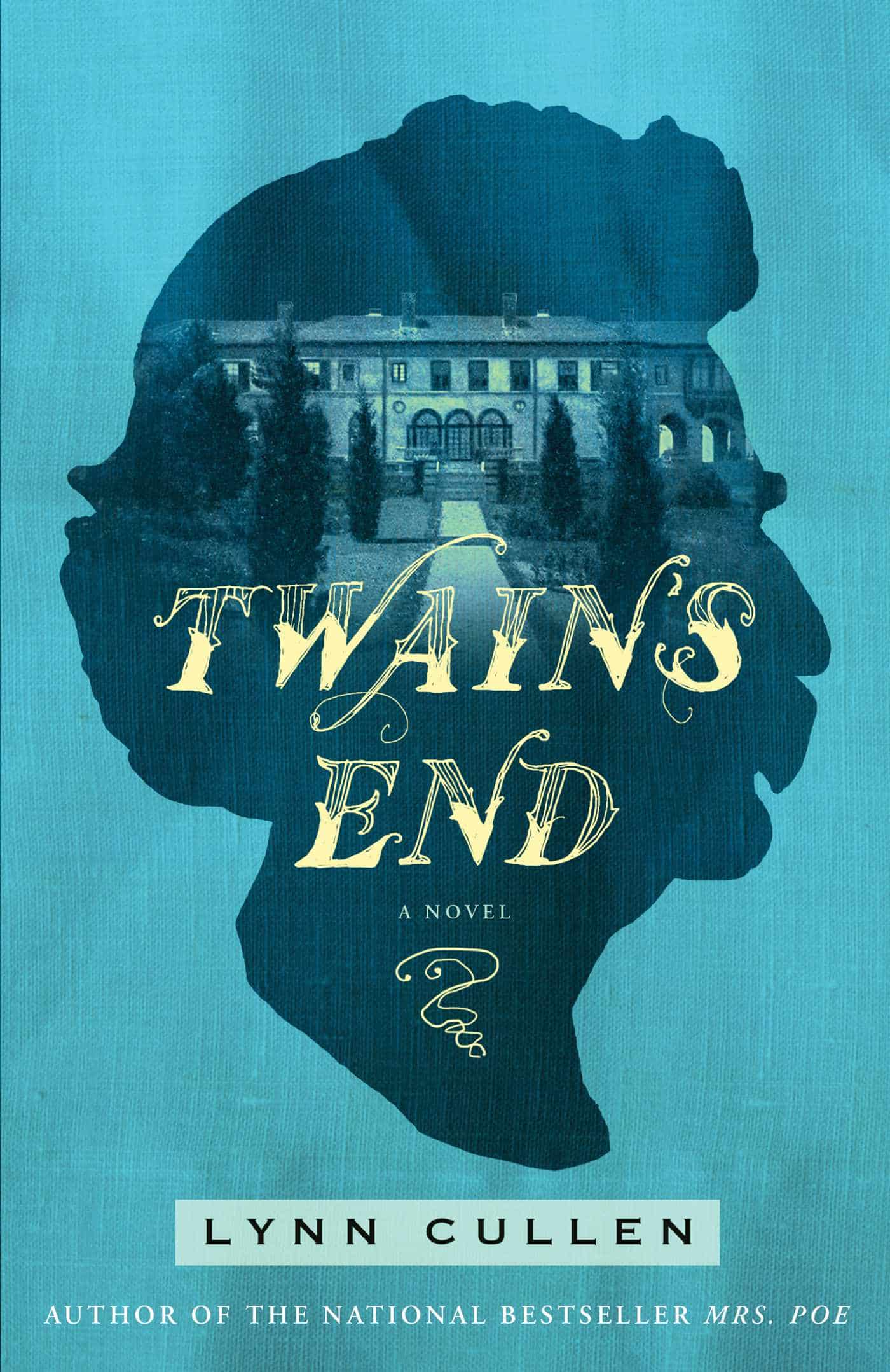 Samuel Clemens, also and perhaps more widely known as Mark Twain (1835–1910), continues to be a person of great curiosity. Such interest will endure, no doubt, as will his literary accomplishments. There are many biographies written about the man, and equally, as many historical novels breathing life back into the author. Twain’s End by Lynn Cullen (author of Mrs. Poe) stands out, not only for her masterful writing, but also for the particular time of Twain’s life she captures in this fictionalized account—its end.

The beginning of Cullen’s tale focuses on a turning point in Twain’s life, when age and health nudge him toward a more sedate life, away from the glittering Fifth Avenue of New York City, to an Italian style villa in the quieter Redding, Connecticut. With him are his daughter Clara and a private secretary, one Miss Isabel Lyon.

From the first words, Cullen, a lyrical writer, sets the tone, one reminiscent of the iconic Jane Austen. At this juncture, Isabel Lyon had been his secretary for six and a half years. Twain has given her a little house on the villa’s grounds, where Isabel’s mother lives, and where the world assumed Isabel lived as well. Isabel’s mother holds little gratitude for her home. It is dashed by her distaste for her daughter’s position with Mr. Twain. Mrs. Lyon offers the first glimpses of Twain’s truths, his selfishness, temper, as well as his talent, and how much better her daughter deserved. After all, Isabel had been raised reading the Iliad, attending Broadway plays, and rubbing elbows with the likes of Horace Greeley, all by her scholarly father’s side, a father now deceased.

Cullen introduces Twain with aplomb, “At seventy-four, he held himself with the amused confidence that a younger man could only pretend to, a confidence that invited you to let down your guard even though you knew he would not be doing likewise.” Her depiction of Twain’s daughter was equally economic, though far more cutting, “Clara barged in like she owned the place, which she would, as soon as she could shove her father off this mortal coil.” The rendering of Clemens/Twain throughout is not done through the eyes of adoration, but through a crystal-clear glass, a magnifying psychological intensity, revealing not the legend but the man, with all his foibles, eccentricities, and even cruelness.

The truth of Isabel’s relationship with Twain is dropped in with such nonchalance it is rendered greater effect, “(The butler) glanced up, the silver creamer cradled in is callused hands, then looked back down quickly. A blush flooded the hollows of his cheeks. He had been unable to meet her eyes since discovering that her bedroom in the big house adjoined The King’s.” Throughout the scenes in which Isabel carries the tale, she refers to Twain as “The King,” her King, always capitalized, even in her speech. Her mother loathes it. But Isabel loves, falls in love, with the man. “She wished people would not call him Mark, not even Helen Keller. Mark Twain was not a real person. The person they were addressing was Samuel Clemens. But The King never corrected anyone on this. Instead, something inside him seemed to shift when he heart it, as if the mortal Sam Clemens were stepping aside for his slow-moving doppelganger, Twain.”

Once the story fully hooks on the present, done adroitly with a cast that includes Helen Keller, her teacher, Mary, and Mary’s husband, and the peculiar triangle they form, the story steps backward, to Isabel’s intellectual, eclectic childhood and onto the onset of her relationship with Twain. Here we find Twain’s wife: sickly, sequestered, and not entirely sane. She is, nonetheless, not blind when it comes to the ways of her husband. Her presence in his life, in the book, is haunting, ever there but rarely present, a shadowing wraith that hove at their edges, unseen hands pushed this way or that. The once impoverished man that was Samuel Clemens rarely forgot his wife. The rake that was Mark Twain often forgot he was married.

Isabel’s riches to rags life led her to the Twain household as a governess. Concurrently are depicted the events which led to Twain’s career in writing, a journey told with the length of a bible in his four-volume autobiography. Here it is swiftly rendered and done so with poignancy, “Desperate now for cash, (after failing prospecting in Nevada) I saw that I might write a little piece for the local paper. I liked writing it, and peopled liked me writing it. I traded in my pan for the pen and never looked back, something I never would have done if I had found the mother lode.”

His career trajectory crossed over Isabel’s life, strange coincidences continued, pulling them apart, bringing them back together. Cullen sweeps along, defining their lives, the power of destiny and fate, a twisted power that damages as much as it enriches, and always surprises. Such surprises dot this tale like ornaments on a tree, though they do not always glitter.

Cullen’s mastery over Twain’s dialogue is perhaps one of the book’s greatest assets; what he says and how he says it, pulls back the veil upon the rough-hewn literary genius.  Perhaps its weak spot is in the shifting of time not always clearly delineated. But it is a feeble criticism at best. There is a good deal of lead-up to the core of the tale; although filled with deft development of these extraordinary characters, its rise to the conflict is a shallow incline, requiring a bit of patience. Regardless, the jewels of Cullen’s prose glitter, dropped and perched all along the story like a crown, “And his eyes—oh, when he looked at her like that, with those quicksilver eyes. There was never a more beautiful beast.”

Twain’s End is the story of Twain and Isabel, their struggles with their growing feelings, and the odd culmination of them. But it is also the story of Clemens’s journey into old age and the steps of his life before its final chapter. It is a Twain little known but highly worth knowing.