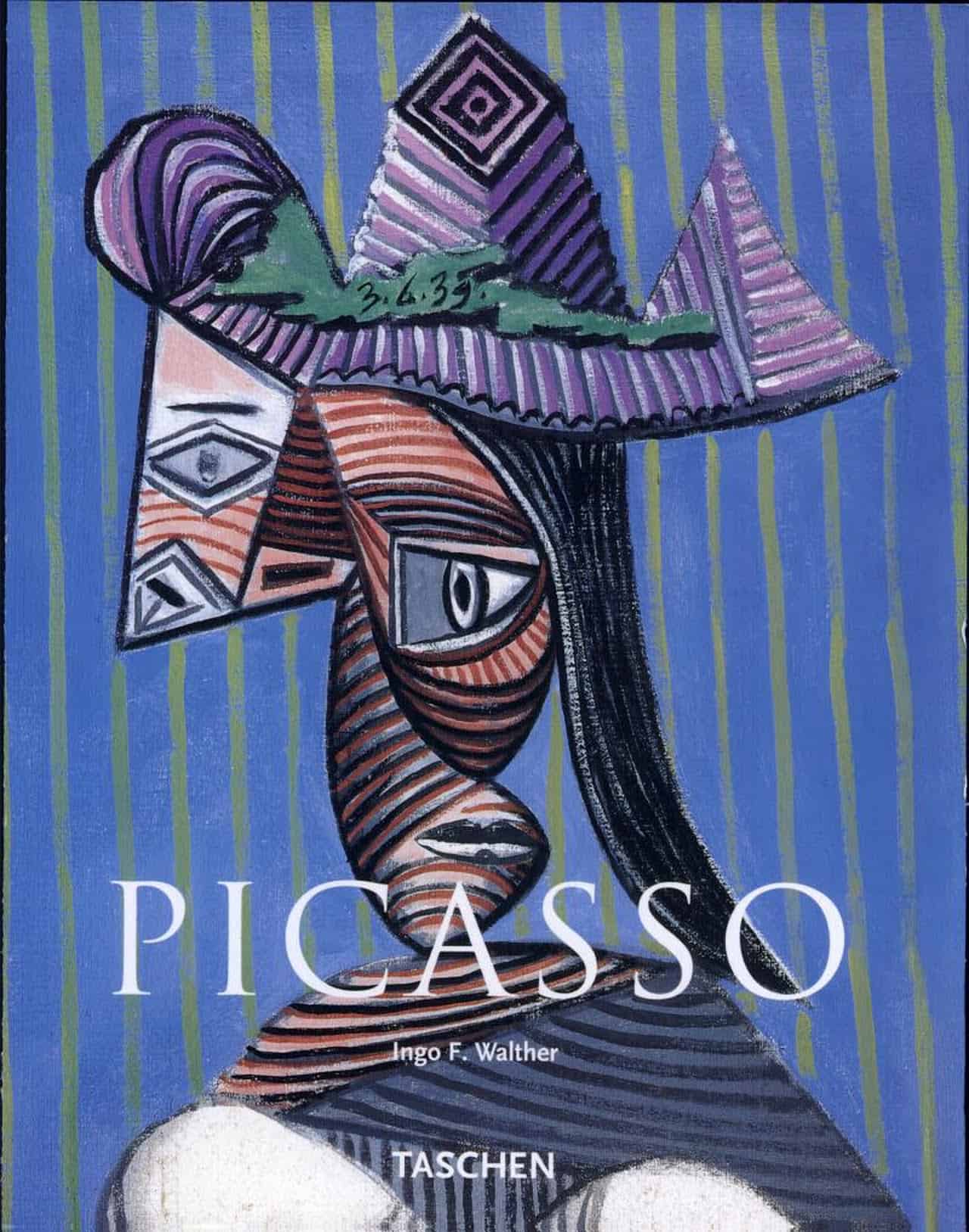 This brief biography, published as part of Taschen’s short and affordable series on notable artists, provides a nice introduction to the life and work of Pablo Picasso.

Walther, a German writer who passed away in 2007, begins with a discussion of Picasso’s early life. He retells the legend of young Pablo’s birth when he was supposedly given up for dead until his uncle, Don Salvador, blew a cloud of cigar smoke in his face. He was, of course, a child prodigy whose talents drove his own father into self-imposed exile from the world of painting. As the story has it, Picasso’s father was so astonished by the quality of the pigeon’s feet his son had painted, he simply handed over his utensils to the boy and never picked up a brush again in his life. Educated in Barcelona and offered his first opportunities in Madrid and Paris, Picasso nevertheless failed to discover “his life as an autonomous artist” until he entered his famous Blue and Rose periods, which were defined by themes of pathos and melancholy.

The defining moment in Picasso’s life, of course, was his transition from his “Rose Period” to cubism. As Walther characterizes it, Picasso “initiated a revolt against Western art in general.” Cubism was “a new perception of reality, a new method of inventing truth that enabled him to break the old laws.” Those laws, quite simply, insisted art be somehow faithful to “real life”—a demand that Picasso had come to reject. Instead, he began creating works of art that possessed their own logic, that presented their subjects from multiple perspectives at once and converted the world we see into a striking array of geometric forms. Over time, Picasso’s cubist style grew, even more, disjointed, as he experimented by distorting the proportions of the objects he painted, as well as the perspectives from which those objects were viewed. In works like Guitar (1913), he even used charcoaled and painted-over scraps of wallpaper, colored paper, and newspaper to further play around with the relationship between representation and reality.

Ever the innovator, Picasso briefly turned away from the extreme cubist style in the years around the Great War (WWII), when the artist “began to appreciate anew the joy of observing daily life, the movement of people walking by, and normal everyday relationships” (51). Gaining a fresh appreciation for “the simple perception of the commonplace,” Picasso produced some of his most famous work in a span of a few short years: Paul as Harlequin (1922), Women Running on the Beach (1922), and The Pipes of Pan (1923). In these paintings, Walther explains, Picasso’s cubist techniques were placed in abeyance, as he sought to portray concrete, intimate moments: love and friendship, happiness and peace. Some elements of cubism were visible in these works—the bodies he painted were ever so slightly out of proportion—but none of the elaborate abstractions of his previous works. Picasso never abandoned cubism, however. Indeed, one of his greatest works, Three Musicians (1921) emerged from the middle of this “classicist period,” and he returned wholeheartedly to the technique after a few years, and developed it in many ways throughout the rest of his life.

Walther’s survey of Picasso’s work relies heavily on his detailed examinations of individual paintings. The best of these discussions are thought-provoking and convey a strong sense of how the paintings fit into the artist’s life at the time. The illuminating look at Guernica considers not only the inner language and technique of the painting, but also its place in the larger sweep of Picasso’s work during the war. For some readers, other parts of the book may seem too weighted down by overly detailed analyses of form and technique. There are interesting sections, each set apart from the rest of the book, that deal with Picasso’s posters and sculptures. And as with all of Taschen’s short books about artists, the pages of Walther’s books are stuffed with familiar and unfamiliar images, including sketches and studies that give depth to Walther’s discussions of technique and theme.