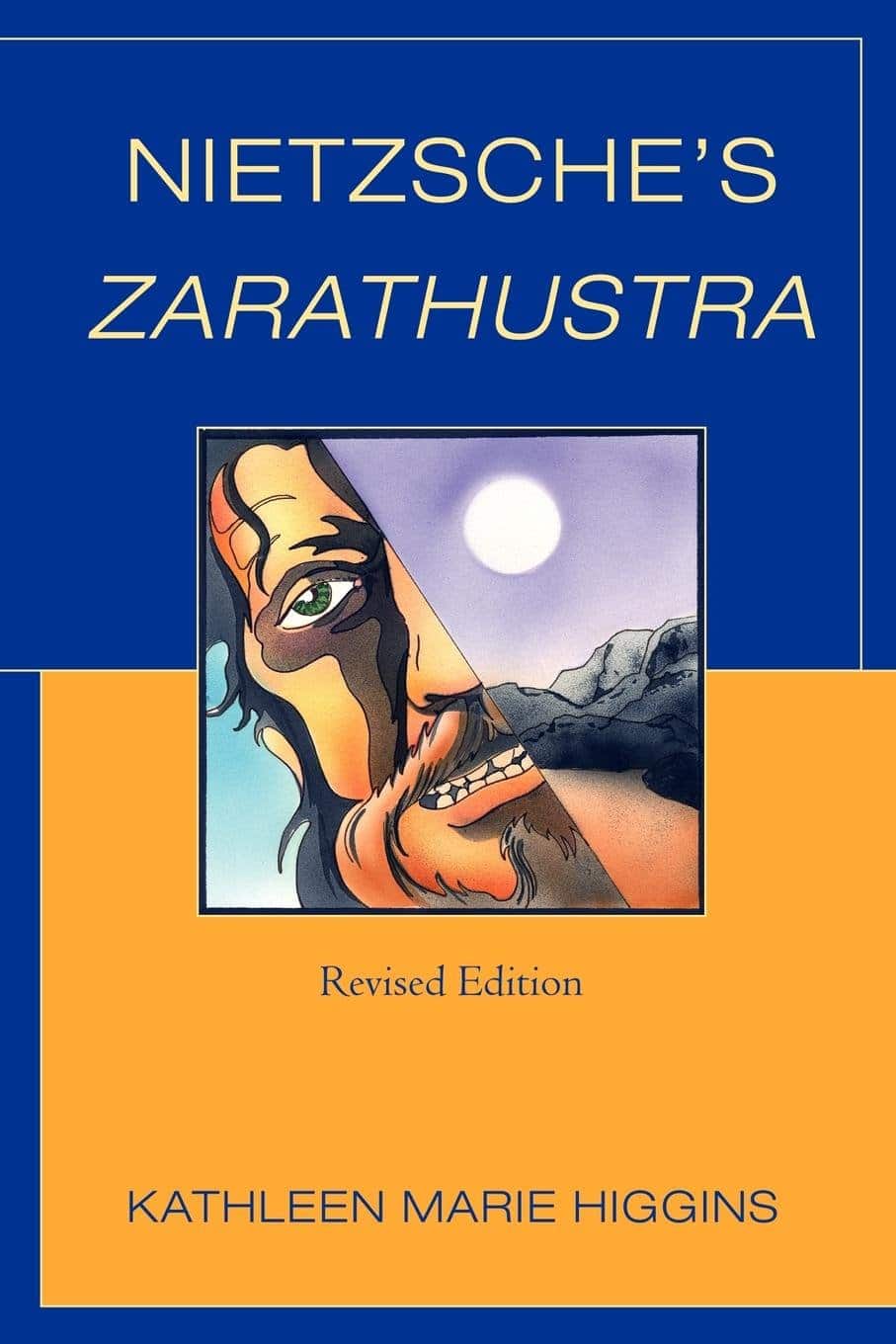 It is fair to say that the 19th Century German philosopher Friedrich Nietzsche’s most challenging work is his four-part philosophical novel Thus Spoke Zarathustra, where the fictional character of Zarathustra, serving as Nietzsche’s mouthpiece, wanders around prophet-like giving impassioned sermons on a variety of topics. Written in several bursts of fervent activity over the years 1883-1885, this richly ambiguous and metaphorically overabundant book—considered by its author to be his gift to mankind (Ecce Homo, Preface, 4)—has consistently garnered a broad range of reactions from its readership: from dismay and perplexity to avid enthusiasm, from utter dismissal to fascinated preoccupation. And despite the bewitchment it can exert on some unsuspecting and impressionable readers, a serious and deep understanding of its content is far from being easily attainable.

In her 2010 book, Nietzsche’s Zarathustra, originally published in 1987, Kathleen Marie Higgins, a professor of philosophy at the University of Texas at Austin and Nietzsche scholar, does not offer a detailed interpretation of Zarathustra, but wishes instead to “indicate the general sweep of that text” (p. 80), adopting an “interdisciplinary” (p. xx) approach that combines philosophy and literary studies, in the belief that Zarathustra is an attempt at a “bold invention in writing” (p. xix). Accordingly, the book does not offer a close analysis of some of the most important sections of the work—not to mention a section-by-section analysis as has been offered by such writers as Laurence Lampert in his Nietzsche’s Teaching: An interpretation of “Thus Spoke Zarathustra” (Yale University Press, 1989). Consequently, this book is not for the uninitiated, who seek a steady hand to guide them through the lush thicket of the text. Neither does the book explore some of Zarathustra’s most famous and important philosophical ideas such as the will to power, the overman, or the creation of values—but with an important exception to which Higgins devotes an entire chapter, namely, the idea of the Eternal Recurrence of the Same: a central idea in Nietzsche’s philosophy, which he himself presented to be the “fundamental conception” of Zarathustra (Ecce Homo, Books, Zarathustra, 1). The book is thus for the advanced reader, already familiar to some degree with Nietzsche’s philosophy in general and with Zarathustra in particular, who is interested in unlocking some of the more stylistic and thematic riddles that characterize the work.

Higgins first sets up the stage by arguing that Zarathustra should be read in light of Nietzsche’s attempt, already articulated in his earlier The Birth of Tragedy, to address the problem of the meaning of suffering in life: how are we to affirm life in light of great suffering that cannot be remedied through “thinking things over” (p. 14)? The Christian solution is famously (and heavily) criticized by Nietzsche and is thus unavailable. But why is the answer that Nietzsche provides in Tragedy according to Higgins—that tragic play can reawaken us to our love of life, warts and all—not good enough? Why did Nietzsche have to write Zarathustra? The book does not offer an explicit answer to this question.

A focus of Higgins’ analysis is the peculiar fact that throughout the text—starting especially in the second part—Zarathustra is presented as experiencing setbacks, hesitations, states of perplexity and uncertainty, which all suggest according to Higgins the “ambivalence” (p. 75 and throughout) of Zarathustra’s doctrine. One central example of this is to be allegedly found in the baffling section “The Stillest Hour,” which concludes the second part of Zarathustra. Here Zarathustra is engaged in self-reflection and confronts a “voiceless voice” which exhorts him to speak what he knows despite his protestations that he knows “it” but does not want to say “it.” What is it that Zarathustra knows and why he is so reluctant to say it—all of this is highly vague, but according to Higgins this is an indication of Zarathustra’s “confusion” (e.g. p. 91) about his own teachings. What is the nature of this “confusion” and what is its cause? Here I found myself confused by Higgins’ account: on the one hand, she claims Zarathustra “has lost intellectual clarity” (ibid), but on the other hand, she claims his crisis “centers on his … ability to verbalize what he knows” (ibid.), which is a different thing. A third explanation given immediately is that Zarathustra “seems to lack the faith … He has evidently lost touch with the spirit that moved him when he first vowed to share his insights with others” (ibid.). But this is yet another, distinct problem: one can lose confidence in oneself without being confused about what one thinks one knows. In any event, Higgins makes the argument that what really beleaguers Zarathustra is recognition of the “disparity between life, with its chaotic wildness, and the ‘wisdom’ through which human beings attempt to describe life” (p.92). Though supported by shaky textual evidence, I found this to be one of Higgins’ chief and most interesting ideas in the book, namely, that Zarathustra, on several occasions, conveys metaphorically the idea that every attempt to conceptually grasp “life” in a set of rigid propositions is bound to fail given life’s ever-changing nature. Consequently, Zarathustra’s own philosophizing is bound to fail if taken as final pronunciations on the meaning of life, the universe, and everything.

Higgins’ treatment of the idea of the Eternal Recurrence of the Same—the idea ‘that the cycle of events in time repeats itself an infinite number of times’ (p. 103)—was in my view rather unclear. According to her reading it is an “expression for a fundamental orientation toward one’s life” (p.105), one which focuses on the present and regards it, rather than the past or the future towards which one might be working in one’s goal-directed activities, as of the highest importance and intensity. This is supposedly Zarathustra’s (rather disappointing) panacea to the tragedy that is life. Why Nietzsche had to resort to such bombastic formulations about time and eternity to make such a rather straightforward claim remains a mystery to me. What is interesting, however, in Higgin’s approach is the way she applies her previous conclusion to Eternal Recurrence: the doctrine is itself ambivalent and possibly “horrifying” (p. 123), Kathleen argues, and so its function must be limited to the positive role is it supposed to play in one’s life—namely, to invigorate one’s attunement to the present. Once one generalizes the doctrine and regards it as some kind of theory, however, things are bound to go wrong given life’s “chaotic wildness” and essential recalcitrance to all grand-theorizing.

In the last chapter of the book, lauded in the blurbs as providing the book’s most important contribution, Higgins attempts to explain Zarathustra’s fourth and last part in which a radical change of tone and style occurs and the somber is transformed into the burlesque and comical. Higgins’ novel claim is that the part’s composition was highly influenced by the ancient satiric Roman novel Apuleius’ The Golden Ass. One central clue on which the connection hangs is that in Zarathustra too there is an ass, more specifically, an ass “festival,” where the animal is worshipped by all sorts of “higher men” whom Zarathustra meets. What is more, Zarathustra himself is referred to directly and indirectly as an ass. Higgins spends some time arguing for the influence of the novel on Nietzsche, but the payoff is embarrassingly and frustratingly slim. One question Higgins poses is “Who is the Ass?” But she herself claims that “perhaps we do not need to compare Zarathustra to the work of Apuleius in order to see that Zarathustra is being called an ass in a certain sense” (p. 148). What is the significance of Zarathustra being called an ass, however? In The Golden Ass, the hero learns from his errors and undergoes “spiritual development” (p.150), thus redeeming his folly. Similarly, Zarathustra confronts his own folly—the error of having held his doctrine at times as a rigid teaching (p. 150)—and overcomes it by laughing at it, thus acquiring new self-understanding and insight. This is a valuable point, but again, I cannot but lament the scanty philosophical fruit that Higgins plucks from her tree following a twenty-page-long buildup. But perhaps I am just being too philosophical.