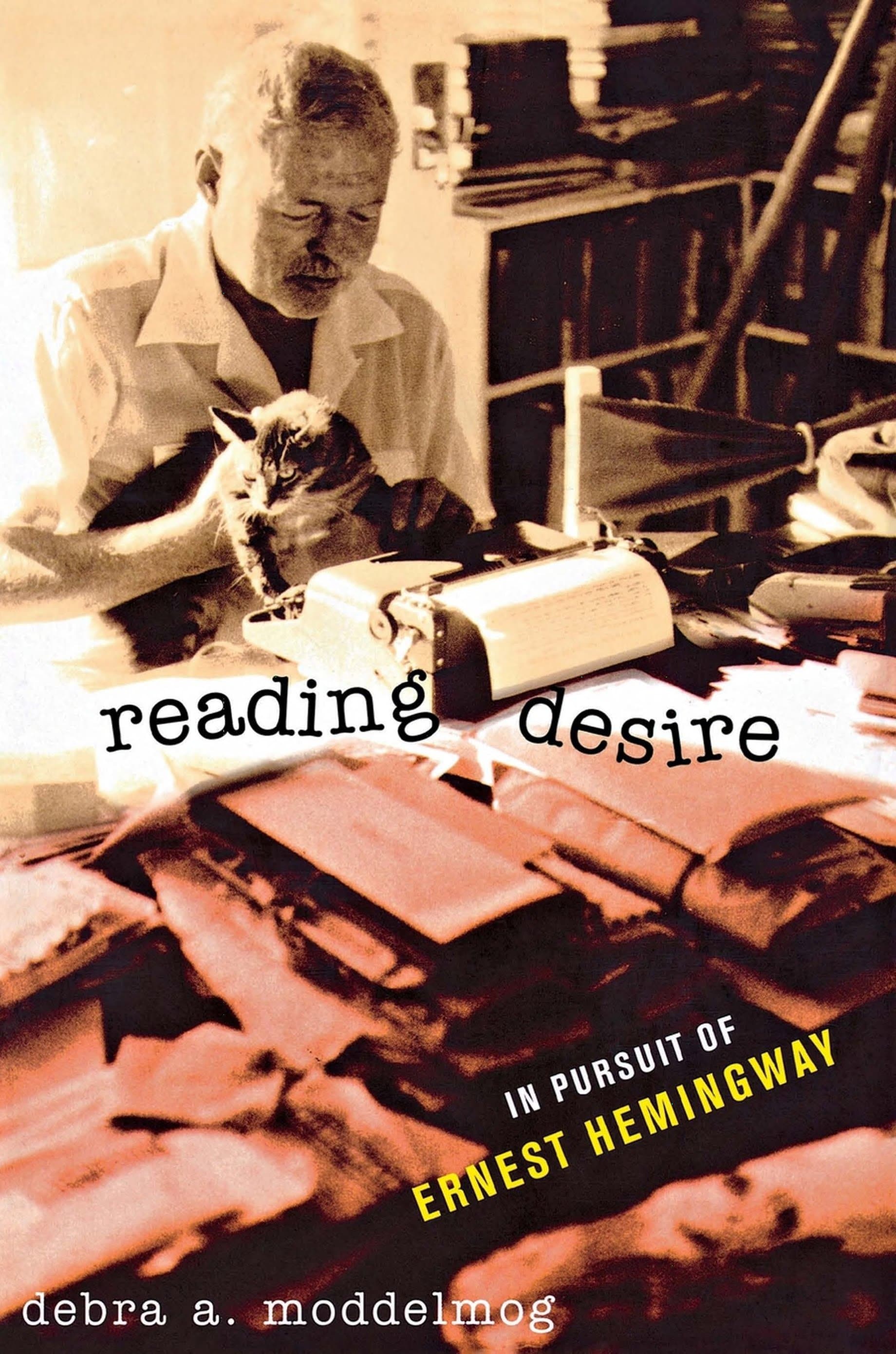 To understand the title of Debra Moddelmog’s 1999 book Reading Desire: In Pursuit of Ernest Hemingway is to anticipate the book itself. It is about a reading desire and a reading desire—desiring to read and reading to desire. In being a pursuit, it is a constant activity. And Ernest Hemingway is, of course, the subject of this desire. But if one looks solely at the subtitle, one will be grievously misled about what Moddelmog herself is pursuing. Reading Desire is not strictly a biographical pursuit of Hemingway.

First and foremost, it is the formulation of a theory on the relationship between reading and desire. Then it is a biography of Hemingway’s cultural image. Only after this does the book resemble a typical biography, and this is only to emphasize how the desire of readers/writers is linked to what is included in the biography of a writer. Reading Desire is an amendment of sorts to the constitution of Hemingway’s identity as the prototypical white, American, heterosexual man; he is more than this, if you wish to see it.

Despite being published 13 years prior, the posthumous publication of Hemingway’s The Garden of Eden haunts Moddelmog’s book. At the time of its release, there was considerable controversy over the cuts from the original manuscript, including elements that would have questioned the image of Hemingway as a “man’s man.” So significant were these deletions to the reappraisal of Hemingway—and dominant cultural notions of masculinity, sexuality, race,—that editor Tom Jenks and publisher Scribner were forced to defend their editorial decisions. Jenks himself essentially claims that he, Moddelmog snidely comments, “became a sort of medium for the spirit of Hemingway.” But it was not a novel written by “Hemingway’s spirit,” but a novel “written, in effect, by way of cultural myth.” Moddelmog’s critique of The Garden of Eden acts as the centerpiece of Reading Desire precisely because it shows how we are our desires and, as us, our desires are what we filter the world through. Her critique will likely be familiar to students of literary theory as it draws upon the major works that have influenced such theorists since their publication, including Roland Barthes, Michel Foucault, and Judith Butler.

So Moddelmog conceives of the author as a subject “always being invented” by those who discuss them. In the instance of Hemingway, this discourse takes the shape of a self-sustaining “sexist, heterosexist, and homophobic matrix,” wherein even the feminist critic’s adoption of the concept of “androgyny” simply reinstates the offending binaries (male/female; straight/homosexual; etc). It is here that Hemingway’s infamous death is adjusted to reproduce the historical author alongside the invented one. They exist in “a dialectic between the real and representational.” Practically speaking: even if an author only exists through writing, there would be no author without him having actually existed outside of his work. In this space Moddelmog structures her “anti-foundationalist” approach. Through a Lacanian lens of desire as “a desire for recognition by the Other,” an unattainable longing for “something else,” and seeing this desire as “indeterminate and unconscious … inherently radical,” the title’s intent becomes clear. Reading Desire attempts to lay a foundation for an ethically and politically charged re-reading of Hemingway through amorphous desire. Amorphous desire, therefore, becomes a tool that “makes us aware that [binary systems are systems]” which can be understood and struggled against.

That this approach is old hat is not to say it’s not worth reading. Not only because Hemingway is still seen as the prototypical man’s author, or because the man’s author myth also lives on in the grit of Cormac McCarthy. Yes, this makes Moddelmog’s approach replicable with authors like McCarthy, especially her clarity with later issues not directly related to gender and sexuality in Hemingway’s writing, including racist, classist, and imperialist dynamics. It is impossible to avoid how, two decades on, these issues remain relevant; this is the oracular implication of the footnote “psychoanalytic narratives about desire are a means by which desire is socially coded rather than the ultimate judge of desire’s meaning.” Society constructs binaries to order and restrain desire, so as long as there is desire, there is also a need to desire desire. Yet, it is not only because of these factors that Reading Desire is still worth reading. It is the conclusion wherein Moddelmog brings the pedagogical into the social, distinguishing between “identity politics” and “pluralistic multiculturalism.” With this, she displays both how and why pursuing Hemingway matters.

Confusingly, these terms have reversed meanings today. Nowadays, identity politics is associated with attempting to “stabilize identity” within binaries, and “pluralistic multiculturalism” tries to incorporate hybridity—another sign that culture moves and we must pursue it. Unfortunately, this is also the place in which Reading Desire itself stops short. Moddelmog ends on a brief discussion of how teachers can bring this “antifoundationalist approach” to their students, using her own experience as an example. This is arguably the purpose of pedagogy: the teaching of desire. Ironically, this personal touch makes one realize the absence of society in general. Because, while one walks away from Reading Desire with an appreciation of the importance of engaging with culture through its literary authors, there remains the question of how to engage authors of other kinds and other ages. The universality of this approach is belied by the possible distinction between Hemingway and McCarthy (one being dead and the other being alive) or between another and self. If the author is mostly comprehensible post facto and riddled with cultural repressions, how can one put into practice the desire to desire one’s self? Perhaps that is for others to do; there were, after all, two in the garden of Eden.

Justin Goodman is a freelance writer whose work has appeared in Submissions Magazine and Italics Mine.