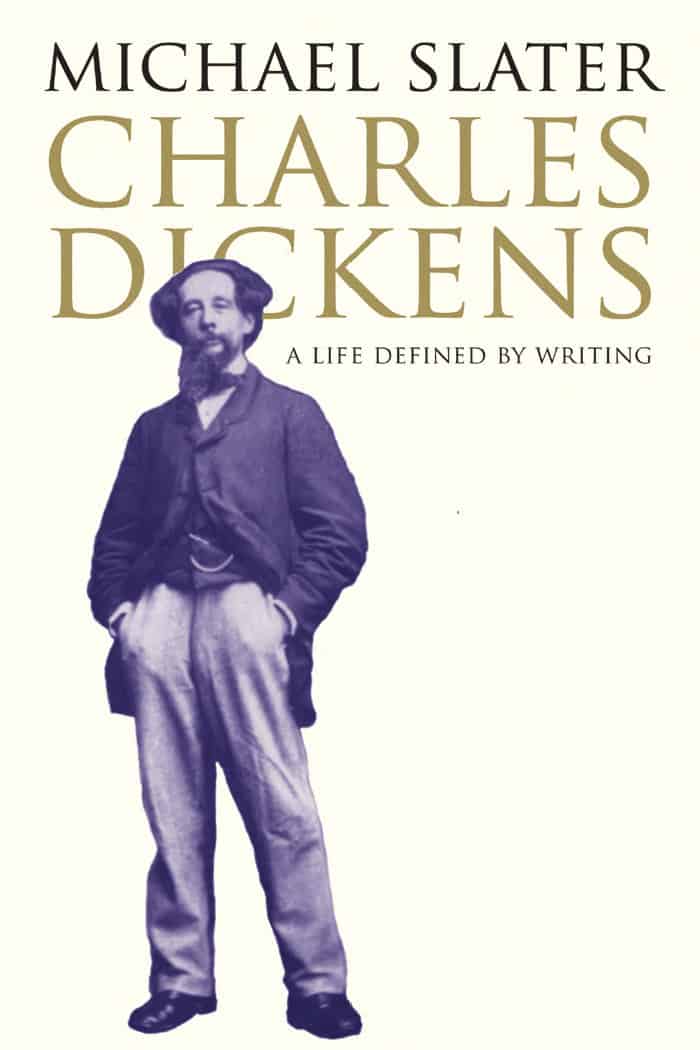 Michael Slater, Emeritus Professor of Victorian Literature at Birkbeck College, University of London, drew on his wide knowledge of Charles Dickens‘s work and life to write his biography, Charles Dickens (Yale University Press, 2009). The focus of this work is eminently literary: Slater does not open with Dickens’s birth or family tree, but with the first extant writing samples by Dickens the schoolboy, including a clever little note joking about a classmate’s wooden leg. Slater tends to divide Dickens’s life by the eras of his work, with sections such as “The Master Humphrey Experiment, 1840-1” or “Writing Bleak House, 1852-1853,” which take us from the often exuberant beginnings of a project to Dickens’ mixture of pride and bereft depression at the end.

Dickens was born poor in 1812, the son of a rather shiftless father who would serve as a model for such inadequate father figures as Joe from Great Expectations and Wilkins Micawber from David Copperfield. When his parents could not afford his schooling, young Charles spent about a year working in a blacking factory—a traumatic experience of which Slater expertly traces the effect in Dickens’s later writings. Another youthful trauma, his jilting by Maria Beadnell, was an inspiration for later romantic stories. In 1836, he married Catherine Hogarth, with whom he had 10 children (one died in infancy) but whom he later cast aside when he met Nelly Ternan, the actress with whom he was involved until his death in 1870. Meanwhile, as Slater notes, Dickens was an indefatigable hard worker, enumerating how many professional, literary, and charitable commitments the writer had going on at once. He churned out his novels and copious short fiction and nonfiction, while also editing literary magazines such as Household Words with impressive energy, and undertaking tours to give public readings.

Neither as personable nor as speculative as other recent biographies, Slater’s work is anxious to stick entirely to the facts, dismissing as “gossipy” some of the speculations made by other biographers. His strictly evidence-based approach bears the mark of a careful and honest scholar, though the book pays the price in human interest. Nevertheless, the sheer volume of detail available to Slater, particularly in Dickens’s private papers and intimate correspondence with his biographer John Forster, still allows a good deal to be said of Dickens’s personal life. Slater does permit himself the occasional sly poke at his subject: “Not the least strange thing about this very strange genius was his jocose assumption in [his] letters that these regular childbirths were events for which he had no responsibility,” he writes of Catherine Dickens’s 10th pregnancy. And with such a focus on the words of the witty writer himself, the biography cannot help but include moments of sparkling humor.

A biography of Dickens would not be complete without addressing his iconoclastic political views, the origins of which Slater traces in the shock of witnessing slavery in America; the long walks he took around every city he stayed in, witnessing the suffering of those in hospitals or living on the streets; and, perhaps most importantly, the miserable blacking factory experience of Dickens’s youth. His generosity and empathy towards the poor, the disadvantaged, the innocent victims of society are to be admired in a man who was constantly under the demands of his own ambition, his family commitments, and his adoring public. Additionally, though Dickens’ treatment of the women in his own life was dubious, he wrote with fierce sympathy of women who were the victims of physically and emotionally violent male partners, such as Nancy in Oliver Twist. Slater’s work examines how Dickens’s passionate desire to produce reform in society translates to his novels as well as his polemical writing, from the way he portrays the purity of Oliver Twist to the snarky, jabby political pieces he published anonymously in newspapers.

Despite his resistance to gossip, Slater does tackle Dickens’s scandalous relationship with Nelly Ternan, the actress, which almost certainly motivated him to separate from Catherine. He also looks at some of the other less savory aspects of Dickens’s character: his refusal to take women’s rights seriously, some unfortunate racist views, and his cruel treatment of Catherine. Readers interested in the Victorian literary “scene” might want to read of Dickens’s petty quarrel with Vanity Fair author William Thackeray, or the apology letter he had to write Mary Barton author Elizabeth Gaskell for lifting the plot of a story he published from a favorite tale of hers. Then there are Dickens’s brushes with the pseudoscience of the age: the “mesmerism” he conducted upon Augusta de la Rue, or the laughable scene of spontaneous combustion in Bleak House (followed by Dickens’s passionate public statements on the theory’s scientific basis after others pointed out how impossible it was). Slater resists using these saltier aspects of Dickens’s life for cheap entertainment value, but they still add interest and humor to an otherwise dry book.

After finishing Slater’s tome, one feels oneself acquainted with the true character of Dickens the man: his deep, stubborn ambition; his narcissistic ability to justify himself in his personal choices; his tender love for certain people such as his sister-in-law, Mary; and of course, his extraordinary gift of observation. This gift not only allowed him to become one of English literature’s most effective creators of character—from caricatures like Mrs. Jellyby to psychological realist portraits like Pip—but also made him an excellent actor, public reader, and conversationalist.

The greatest strength of the biography is its loving attention to the details of Dickens’s writing process and literary products. One fascinating source of information comes from Dickens’s “mems,” or memoranda, for each number of many of his serials: careful plans showing the genesis of the complex ideas and plots that structure the finished work. If the purpose of literary biography is to trace the relationship between life and art, to develop the man-as-artist as well as the man himself, Slater does an excellent job of this on the large scale and the small. The many nature-related names Dickens tried out for David Copperfield, such as “Flowerbury” and “Copperboy;” the excisions he made to turn Oliver Twist into a two-hour reading of the heart of the novel entitled Sikes and Nancy; the mysterious notes that were left over from his last unfinished novel, Drood: these and many more serve as sources for Slater to interpret Dickens’s process and creations in terms of his life, weaving a unified narrative of his varied, brilliant body of work.