A Worse Place Than Hell: How the Civil War Battle of Fredericksburg Changed a Nation 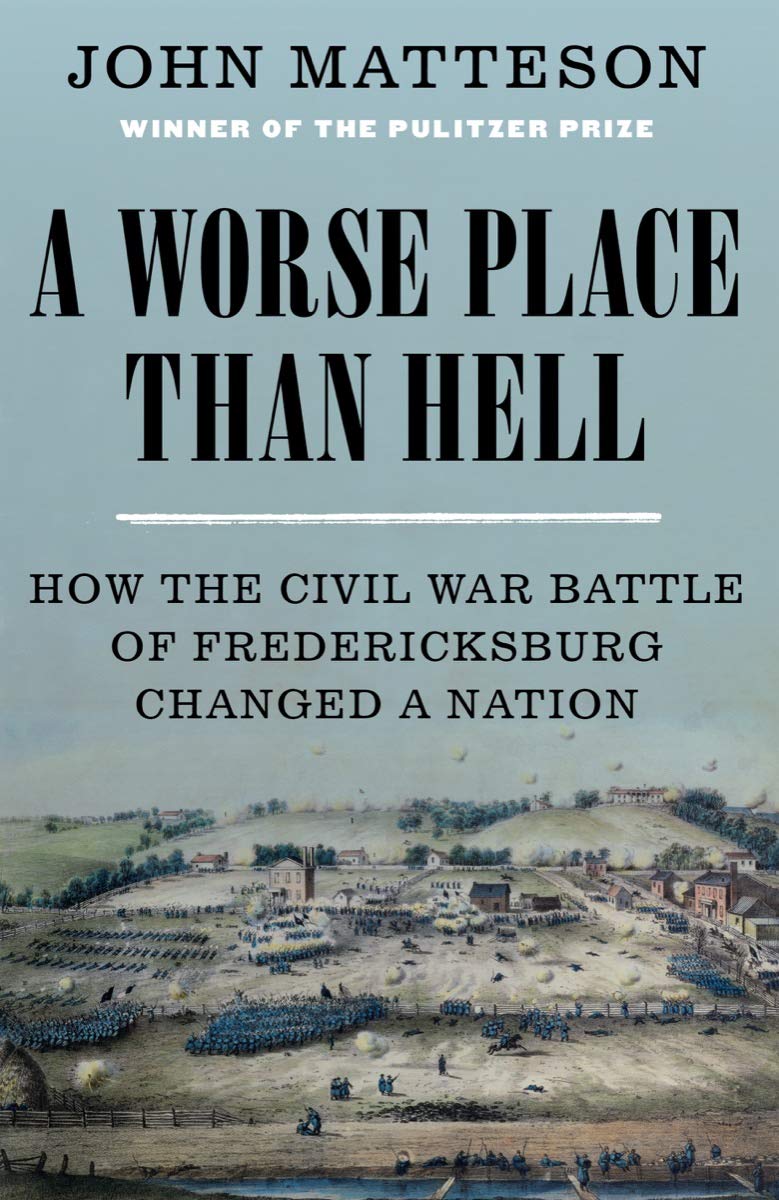 A Worse Place Than Hell: How the Civil War Battle of Fredericksburg Changed a Nation

John Matteson, Distinguished Professor of English at John Jay College of Criminal Justice and winner of the Pulitzer Prize for Eden’s Outcasts: The Story of Louisa May Alcott and her Father, is steeped in nineteenth-century literature and biography, and is also the author of the highly regarded The Lives of Margaret Fuller. The Alcotts and the Fullers, and this time Margaret’s brother Arthur, figure in this new group biography centered on the Civil War battle of Fredericksburg, a disaster for the Union and for Abraham Lincoln’s presidency but also the testing ground for Matteson’s other biographical subjects: Oliver Wendell Holmes Jr., Walt Whitman, and John Pelham, the least known but nonetheless celebrated artillerist who embodied in the South the gallant cause of the Confederacy.

Matteson provides riveting accounts of the Fredericksburg battle, made even more terrible by the blundering maneuvers of incompetent Union military leadership, and glorious in the swashbuckling charges of dashing Jeb Stuart and the canny, bold gun emplacements of John Pelham, a beautiful specimen of manhood (everyone said so). Stuart and Pelham, devoted to one another, perpetuated the myth of the Southern cavalier tradition—at once bloodthirsty and elegant on the dance floor. With the Union debacle of Fredericksburg, Northern troops also began to believe in the Southern triumph that had wounded Oliver Wendell Holmes’s Jr. who escaped the battle quite literally by an inch of his life given the trajectory of the bullet that brought him down.

Holmes, later to become a distinguished Supreme Court justice, was the son of the famous doctor and poet, Oliver Wendell Holmes Sr., the “autocrat of the breakfast table,” as he liked to style himself. Holmes, Jr. left Harvard to go to war to defend his own and his nation’s honor, and after more wounds and battles decided there was no meaning to the war except to blindly assert one’s honor and loyalty to the cause of one nation—but not one under God. To Holmes, the war had proved the randomness of life, making nonsense of Arthur Fuller’s devotions—his ministry to men that he tried to make good Christians even as they set out to kill. Fuller, who in his own estimation never measured up to his famous sister, Margaret, eventually perished as he went into battle himself, no longer able to tolerate his sidelined existence.

Since Plutarch, biographers have concerned themselves with parallel lives, how one famous figure helps to define another (the Holmes/Fuller pairing is especially illuminating), but as a modern biographer, Matteson deals with smaller, obscure lives as well—like Whitman’s stalwart brother, George, a redoubtable soldier, wounded and incarcerated in a ghastly Confederate prison. Like so many of Walt Whitman’s compatriots, George never did understand his brother’s poetry or even understand how it could be that a grown man considered writing verse proper employment. George’s bafflement at his brother’s behavior is a stand-in for all those other dismissals of Whitman’s powerful devotion to the word, an attachment he utilized as well by taking down the dictation of wounded soldiers and sending letters home to their loved ones. Alcott did the same and became attracted to the “androgynous charm” of John F. Suhre, a Pennsylvanian she called a “piece of excellence,” although he was a so-called common man, a blacksmith, who went to war at a huge cost to his family. In his gallantry and androgyny, he also calls to mind John Pelham, whose fair countenance and tendency to blush were maiden-like notwithstanding his bloody military exploits. Here, Matteson’s biographical focus serves to integrate all sides of humanity in a way that history alone cannot achieve.

Historians of the Civil War, biographers of its notable figures, and readers steeped in the literature may well ask: But is there anything new in Matteson’s account of the war and its principal actors? Where does the biographer make his mark? Well, in the very configuration of events and personalities is one answer, but another is founded in Matteson’s treatment of the Emancipation Declaration and Lincoln’s dilemma about signing a document freeing the slaves at a time of Union defeats, putting Lincoln, as he said, in a “worse place than hell.” Here is how Matteson sets up his revelation about why Lincoln went ahead with the signing, which occurred shortly after the death of Lincoln’s son Willie:

Historians have discussed exhaustively the president’s political motives for emancipating the enslaved millions in the South. Much less has been said about his reasons for first declaring his intentions as he rode to an infant’s funeral. It seems impossible that, on that Sunday morning, no thoughts of Willie pressed upon Lincoln’s mind. It was not in his nature to believe that events occurred at random; he felt continually driven by some transcendent force or will.

Biographers sometimes venture where no historians dare to go. So what Matteson does next is risky:

Almost inescapably, one concludes that Lincoln saw in Willie’s death a moral imperative: his private loss demanded to be redeemed by a higher objective for his presidency: an aim more sacred than preserving the Union. If Lincoln needed some final impetus to announce his intention to emancipate when he did, where he did, that inspiration was waiting to be found in his loving memory of Willie.

It is always a temptation in biography to transgress—that is, to enter the biographical subject’s mind and to make that transgression seem, as Matteson writes, inescapable. The biographer is the “one” who “concludes,” setting up surmise as to the inevitable outcome of the scene, which itself has a proviso: “If Lincoln needed some final impetus.” Did he, or was it, as a historian might have put it, simply part of the logic of events, the point at which Lincoln could no longer hold off acknowledging what the war was really about: “a new birth of freedom,” as he declared it in the Gettysburg Address.

Biography speaks to our desire for intimacy with the past, with an intense craving, in this instance, to know what was going through Lincoln’s mind at the very moment when history was made. If we cannot be sure (how could we ever be sure?) that Matteson is right, we can nevertheless celebrate his courageous effort to get us as close as possible to Lincoln and all of the other figures in A Worse Place Than Hell.

Matteson’s book has a nobility that honors the lives he narrates, making all of them part of an interlocking story of a common humanity that endures regardless of rank and fame.