MAIN MENU
Gottfried Wilhelm Leibniz Interview Philosophy
Regarded by many as one of the most intelligent humans that ever lived, Gottfried Wilhelm von Leibniz (1646–1716) was one of the greatest thinkers of the 17th and 18th centuries. He made significant contributions to the fields of philosophy, metaphysics, epistemology, logic, religion, as well as mathematics, physics, and geology. 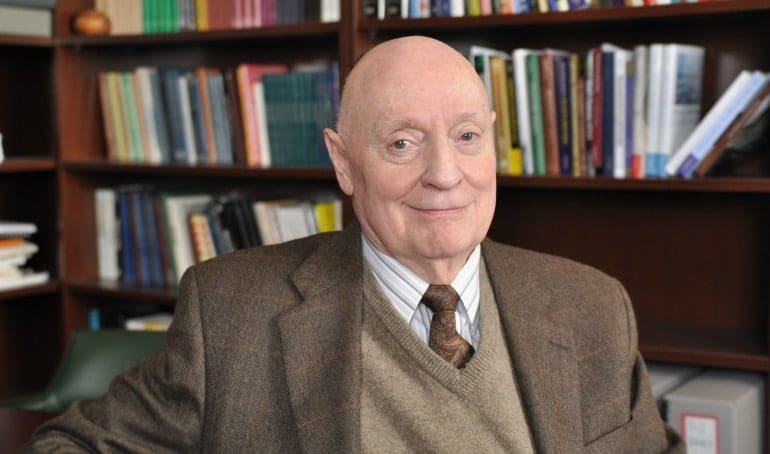 Regarded by many as one of the most intelligent humans that ever lived, Gottfried Wilhelm von Leibniz (1646–1716) was one of the greatest thinkers of the 17th and 18th centuries. He made significant contributions to the fields of philosophy, metaphysics, epistemology, logic, religion, as well as mathematics, physics, and geology.

Philosopher at the University of Pittsburgh and the Co-Chairman of its Center for Philosophy of Science, Nicholas Rescher has had a lifelong interest in the works of G. W. Leibniz. He authored numerous books and scholarly articles about the philosophy of science, Arabic and ancient Greek philosophy, process philosophy, logic, metaphysics, and values.

Simply Charly: You’ve had a lifelong fascination with the life and work of Gottfried Wilhelm von Leibniz. What is it particularly about Leibniz that has swayed you so?

Nicholas Rescher: The amazing things about Leibniz are his versatility and creativity. Quite apart from his classic system of philosophy, he invented entire branches of mathematics (differential and integral calculus, binary arithmetic, topology (analysis situs), theory of determinants), of symbolic logic, of hypsographical method. He devised the first four-function calculating machine (with its ground-breaking stepped drum), a cryptographic machine, a novel style of windmill, and various other devices. He also invented an entirely new way of doing physics, viz. analytical mechanics whose salient question is not “How are we to explain the phenomenon by means of laws?” but “How are we to explain the laws by means of principles?” He was a great scientific organizer, the inaugural President of the Royal Academy in Berlin, and instrumental in launching academies in Vienna and St. Petersburg. He invented the role of science advisor to ruling princes and was an active and influential diplomatist as well as an astute political theorist.

Nicholas Rescher: I wholly agree with my colleague John Searle. Leibniz was perhaps the most intelligent human being who ever lived. And he was also that most widely informed and profoundly learned. No one else since Aristotle’s day has had a complete command of the scientific and scholarly thought of the time.

SC: In the same interview, Searle states that “Leibniz’s actual doctrines are extremely implausible. And though he made important contributions to a lot of fields (for example, along with Newton he invented the calculus) his purely philosophical work is today regarded as mostly of historical interest.” Do you agree with his assessment?

NR: The oft-repeated contention that Leibniz’s purely philosophical work is nowadays of solely historical interest is very questionable. There are many different ways of contributing to philosophy, seeing that one can espouse points of view that people see as originally significant, articulate theses that people nowadays widely endorse, put on the agenda questions that continue to engage thinkers, introduce modes of reasoning and argumentation that find ongoing application. In all of these respects, Leibniz made significant contributions.

SC: Many people first became aware of Leibniz through Voltaire’s satire Candide. In it, Voltaire introduced the phrase “the best of all possible worlds” a doctrine first developed by Leibniz. Today, contemporary philosophers and logicians have made great use of this concept. Can you explain the idea behind it?

NR: Leibniz wrestled extensively with the issue of the world’s contingency—the question of why it is that the world should have the features it actually does and what it is that sets reality apart from other possibilities. His response was that the possibilities actualized in this world maximize “perfection” in a somewhat technical sense of this term. This optimalism of his is not really all that optimistic. The idea of “the best of possible worlds” must be understood with an emphasis on that qualifier possible. The idea is not that this world is flawless, but that the other possibilities fare even worse.

SC: Unlike most of the great philosophers of the period, Leibniz did not write a magnum opus. If he published anything, it was, more or less, “designed to win the approbation of princes and princesses” for whom he served as a courtier. However, the center of his philosophy was is his metaphysics—his theory of the fundamental nature of reality that is contained in the Monadology. Can you briefly explain what Leibniz set out to show in this work?

NR: While Leibniz published several important historical works—especially in the area of political and diplomatic history—he wrote only two philosophical books, the Theodicy of 1710 and the New Essays on Human Understanding (a critique of John Locke he refrained from publishing after Locke’s death). He chose a very different way of disseminating his philosophy—viz. correspondence. His exchanges with some of the most significant thinkers of the day are in many cases book-length. (And over a hundred thousand pages of his correspondence still survive.)  While Leibniz was glad to have the approbation of princes and princesses—an asset very useful for his extensive efforts to establish academies and learned societies—he principally sought the understanding and appreciation of his fellow scholar-scientists. And he engaged them one at a time—through correspondence.

SC: In Bertrand Russell’s book A Critical Exposition of The Philosophy of Leibniz, Russell referred to the Monadology as “a kind of fantastic fairy tale, coherent perhaps, but wholly arbitrary.” Do you agree?

NR: Leibniz saw the task of metaphysics not as one of describing the worlds of our ordinary experience, but as one of explaining it. And this explanation has to take everything into account—including not only natural science from the microscopic to the cosmic level, but also the social sciences, and even theology. Now it is, or should be, deemed only natural and expected that any explanation of reality at this level of generality and depth should look strange to casual inspection—“a kind of formalistic fancy talk.” And here people who live in glass houses shall not throw stones. Compared to our present-day quantum theory of the very small and many-world cosmology of the very large, the Leibnizian monadology is a quintessence of prosaic.

SC: In that same book, Russell also stated that the key to Leibniz’s thought might be entirely derived from his logic. How so?

NR: Bertrand Russell’s contention that “the key to Leibniz’s [metaphysical] thought may be entirely derived from his logic” is a deeply flawed exaggeration. It would, however, be unproblematically true if “the key” were changed to “a key” and that “entirely” omitted.

Russell is right in that much of Leibniz’s metaphysics can be unraveled by following out the thread provided by the theory of truth encompassed in his logic. But he is quite wrong seeing this as the only pathway to this destination.

The fascinating thing about Leibniz’s metaphysics is explained and motivated from very different angles of approach. These certainly include logic, but also mathematics (via his infinitesimal calculus), physics (via his critique of Cartesian mechanics), biology (via his converting on the terms of microscopy), theology (as per his correspondence with Arnauld and Des Bosses), theology (as per his theory of creation as a choice among possibilities), and so on. Just as Leibnizian metaphysics reality encompasses a manifold of points of view, Leibniz’s own philosophical thought-reality conjoins and coordinates a multitude of thematic perspectives. It is exactly this much-encompassing proliferation of thought-perspectives that is the hallmark of Leibniz’s philosophizing and the ground of its fascination.

SC: One of the most public episodes in Leibniz’s career concerned the priority dispute with Sir Isaac Newton over who rightfully invented the calculus. Can you describe the circumstances of this controversy?

NR: The priority dispute over the development of the calculus between the Newtonians and the Leibnizians was conducted by both parties at arm’s length. With both Newton and Leibniz, the dispute was carried on through intermediaries. Here Newton’s secretiveness did his cause much damage. He himself used his methods (based on the concept of “fluxions”) effectively but did not explain and expound them. Leibniz, on the other hand, had cultivated outreach and found many able expositors and exponents (especially l’Hôpital in France, and the Bernoullis in Italy).

The controversy with the Newtonians came to a boil in the early 1700s when Leibniz was extensively preoccupied with other matters. He was more than happy to leave the defense of his interests in other hands.

As a result of the dispute, the Leibnizian perspectives and methods prevailed on the Continent and yielded a flourishing of mathematics there that left Britain mathematically in the dust for almost a century.

SC: Among the many hats that Leibniz wore, he was also an inventor. He developed a calculating machine, inspired by an earlier model designed by Pascal, called Staffelwalze or the Stepped Reckoner, which you had a hand in rediscovering and eventually restoring. Can you tell us more about it?

NR: Besides his skills as a theoretician, Leibniz also (and most unusually) had a talent for engineering, sought to make innovations in clockworks, carriage wheels, navigation aids, windmills, and other devices. Of special interest for him were machines that would conduct cognitive operations. These preeminently included his calculating machine—the very first that could carry our all four basic mathematical operations. For its sake, he devised the stepped drum (German: Steffelwalze) a gear—still called the “Leibniz gear”—that only came into occasional operation and provided for the carrying operation in arithmetical calculation. (The Google entry “stepped drum” leads to a lovely illustration of its operation.)

It occurred to Leibniz that the carry-over from one decimal place to another could also provide for the shift from one monoalphabetic cipher to another in encryption. And this led him to conceive of another cognitive machine—a cipher machine that would transpose messages from one language system to another. He kept this idea in deepest secrecy and put it to view on only two occasions in memoranda for audiences with princes (John Friedrich of Hannover in 1676 and Emperor Leopold II in Vienna in 1688). The descriptions needed to conceptualize the device were only recently published, and it is currently being recreated by Leibniz-machine experts.

SC: What do you feel is Leibniz’s lasting legacy?

NR: Leibniz’s numerous and enduring contributions to philosophy include: the theory of neutral monism in metaphysics; the conception of alternative possible worlds; the idea of the arithmetization of cognitive relationships; the theory that all natural processes root in considerations of maximization or minimization. Even his strange-seeming metaphysic of monadology has made a substantial impact as recently as Russell and Whitehead.

Most important, however, for Leibniz’s lasting legacy is his conception of the systemic integrating of knowledge—that any adequate philosophy must accommodate the sciences of nature, of man, and of society in a seamless whole, integrating this with humanistic and theological perspectives

SC: How would you recommend a student approach Leibniz’s philosophy for the first time? Are there particular texts or secondary sources you’d recommend?

NR: To approach the philosophy of Leibniz one might well read:

• Bertrand Russell, A Critical Exposition of the Philosophy of Leibniz (Cambridge: Cambridge University Press, 1900). [A somewhat dated but lively exposition.]

Thereupon one should read the work of Leibniz himself, especially via: