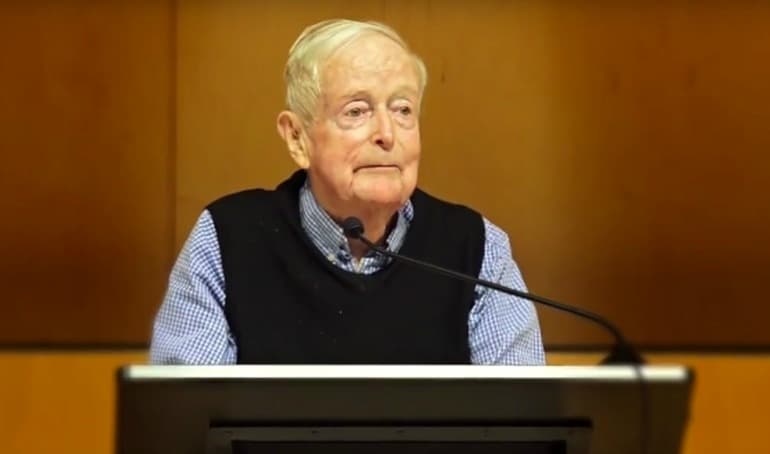 Anton Chekhov (1860–1904) was a Russian physician, as well a prolific playwright and author of short stories, considered to be among the greatest in history.

Former Professor of English Literature at Cornell University, James McConkey is the author of 14 books, including To a Distant Island, in which he retells the story of Chekhov’s 1890 pilgrimage to Russia’s Sakhalin Island.

Simply Charly: You’ve had a long love affair with the work of Anton Chekhov. As an accomplished writer yourself, what specifically drew you to his work?

James McConkey: Long ago, I wrote an essay (it was reprinted in The Telescope in the Parlor) titled “Two Anonymous Writers: E. M. Forster and Anton Chekhov,” which answers this question to the best of my ability. Actually, the values I found in Forster merged with those I found in Chekhov. Both strive for objectivity, for a position in which they are—or at least seem to be—anonymous; their characters are defined against a spiritual ideal they can never attain. In A Passage to India, Forster wrote one of the finest novels of the 20th century. Chekhov was no novelist; the forms he chose—short stories and plays—were in keeping with his talent. For some years, I’ve felt far closer to Chekhov.

SC: Many modern writers consider Chekhov to be not only the father of the short story but also the first modern fiction writer. James Joyce, for instance, remarked that he “brought something new into literature,” and John Middleton Murry has said that Chekhov’s “breach with the classical tradition is the most significant event in modern literature.” Can you tell us what innovations he introduced and how they influenced the evolution of modern literature?

JM: The most obvious answer is that Chekhov ignored the conventional plot, one that leads to a resolution of a problem or concern. All art is artifice; Chekhov, a great artificer, seems to reflect actual life, “reality” as we experience it. And he refuses to impose a moral judgment; he remarks that the reader, not the writer, “is the judge.”

Joyce once said he had written the stories in Dubliners before he read Chekhov. And yet every story in Dubliners mirrors specific Chekhov stories—for example, Maria in Joyce’s “Clay” is foreshadowed by Chekhov’s Marya from “In the Cart.” Joyce remarked that Catholicism lies behind the paralysis of his characters, their inability to will their own destinies. As for Chekhov, he desired a freedom so absolute it was unobtainable; the compassion behind his apparent objectivity reflects his knowledge that freedom, like unity, always is a yearning, a desire. Joyce and Chekhov have many similar positions. Irony is essential to both of them. As Ralph Lindheim, professor of Slavic Languages and Literatures at the University of Toronto, has noted, Chekhov’s irony is compassionate; Joyce’s irony, on the other hand, is often used to undercut his characters. “The Dead” is Joyce’s finest, most complex story. Gabriel’s vision in that lovely conclusion reaches out to include all the living and all the dead. And yet Joyce undercuts that vision. We’re told, “Generous tears filled Gabriel’s eyes.” “Generous” has two interpretations, one of which (large, in size) implies self-pity.

SC: After Shakespeare, Chekhov is the second most performed playwright in history. What is it about his plays that resonate with so many people around the world?

JM: Though the plays have a different structure than the stories, they, too, seem to reflect actual life; the characters, with some intentional exceptions, avoid conventional stage dialogue. I thought the film Vanya on 42nd Street, with Wallace Shawn in the title role, captures the full human dimension, comic as well as close to tragic, that Chekhov can invest in his stage characters. His major plays contain far more types of characters than most stage dramas do, and they interact with each other. Howard Moss, the long-time poetry critic of The New Yorker, died before he got very far in the book he had envisioned on Chekhov’s plays, but he did finish his long essay on Three Sisters. What he says about it applies to Chekhov’s other stories as well. “The typical Chekhovian character,” he comments, “longs for what he can neither express nor have.” And later in this perceptive essay, he remarks, “The repeated sounding of ‘Moscow’ is more than the never-to-be-reached Eldorado of the work or its lost Eden; it is a symbol of distance itself, that past or future in space from which the characters are forever barred.”

SC: Of the 14 plays that Chekhov wrote, only four (Uncle Vanya, The Seagull, Cherry Orchard, and Three Sisters) are acknowledged to be great works. What do you think sets these apart from the rest?

JM: It’s extraordinarily difficult to separate the very best (the best of the best may be Three Sisters) from other fine accomplishments in any field. In Chekhov’s case, these four plays can be contrasted to some hack work he did early on. During his strenuous journey to Sakhalin, flooded roads caused him to spend too many days in the dreary, mud-filled streets of Tomsk, where a performance of one of his plays—a single-act farce—was being performed. That farce had pleased the czar; Chekhov himself felt it to be cheap and vulgar.  If I remember correctly, he referred to it as excrement.

SC: Chekhov was immensely prolific, writing over 200 stories during the span of his all-too-brief life. Is there an overarching theme that unites his oeuvre?

JM: Yes, there clearly is, at least from the time Chekhov became a mature artist, having found his voice. I imagine he wrote more than 200 stories, for he seems to have written countless comic stories early on, most of which have never been translated. I understand they are like burlesque shows and have been depicted as vulgar. In his mature work, his characters demonstrate the difficulty of achieving mutual understanding in human relationships. Chekhov desired a freedom he could never attain, a freedom beyond self. A spiritual yearning underlies his mature creative work and explains his compassionate attitude toward his characters.

SC: In your own book, To a Distant Island, you tried to delve into the mind of Chekhov by retelling the story of his 6,500-mile journey to the island of Sakhalin, a penal colony off the coast of Siberia. What was your motivation to retrace a story that Chekhov had already told in Sakhalin Island?

JM: Slavic Studies specialists certainly are familiar with Sakhalin Island in the original Russian edition, something that I don’t think is true of the majority of English-speaking readers of his stories or auditors of his plays. I found in Chekhov’s journey to Sakhalin—the greatest adventure of his life—a metaphor that helps to explain his nature and his creative work. And, above all, I wanted my book to assist in the understanding of the lyrical ending of a story, “Gusev,” a draft of which Chekhov wrote on shipboard, coming home by sea from Sakhalin. To me, that ending reveals Chekhov’s spiritual nature and insight into others.

SC: During the academic year 1977-1978, you hosted the Chekhov and Contemporary Writing Festival at Cornell University. Several leading Chekhov scholars and contemporary fiction writers were invited, including John Cheever, Harold Brodkey, and Eudora Welty. With such an illustrious group of writers and scholars all weighing in on Chekhov, did you gain any important new insights into the man and his work?

JM: Yes, I gained new insights from each of them, scholars and writers alike—too many to discuss in detail here. The informal talks and lectures given during the two-semester festival have been collected in Chekhov and Our Age: Responses to Chekhov by American writers and scholars, published by the Cornell Center for International Studies in 1985. I can only touch upon a few of the insights here. The Slavic Studies Scholar Rufus Mathewson remarks that Chekhov relied on “implicit narration” and provided Chekhov’s own description of the phrase: “’People are eating dinner—just eating dinner—and at that moment their happiness is taking shape and their lives are being smashed….’” Eudora Welty shows how each character’s version of “reality” differs from that of others and how, in Chekhov, we perceive that “the very greatest mystery is in unsheathed reality itself.”

SC: A recent study, published in the journal Science, suggests that people who read literary fiction such as Chekhov’s (as opposed to popular fiction or serious nonfiction) have higher levels of empathy, social perception, and emotional intelligence. However, linguistics professor Mark Liberman at the University of Pennsylvania disputes these claims in a recent article in Slate. What do you make of all the hoopla surrounding this debate?

JM: The answer is supplied by the question: I consider it all “hoopla.”

SC: You’ve taught Modern Literature and Creative Writing at Cornell University for over 50 years. When introducing Chekhov to your students, was there a particular approach you took?

JM:  I’ve discovered that a teacher of literature can be more persuasive discussing a writer he knows only partially than one he knows deeply.  In discussing Chekhov with students, I often pointed to matters of narrative structure, like the entrance of a second character, who seems almost the dramatic opposite of the one first introduced.

SC: Aside from Sakhalin Island (Chekhov’s only non-fiction work), what other works of his resonate with you in particular?

JM: Three Sisters, The Cherry Orchard, Gooseberries, Gusev, The Steppe, An Encounter. I could continue with this list indefinitely.