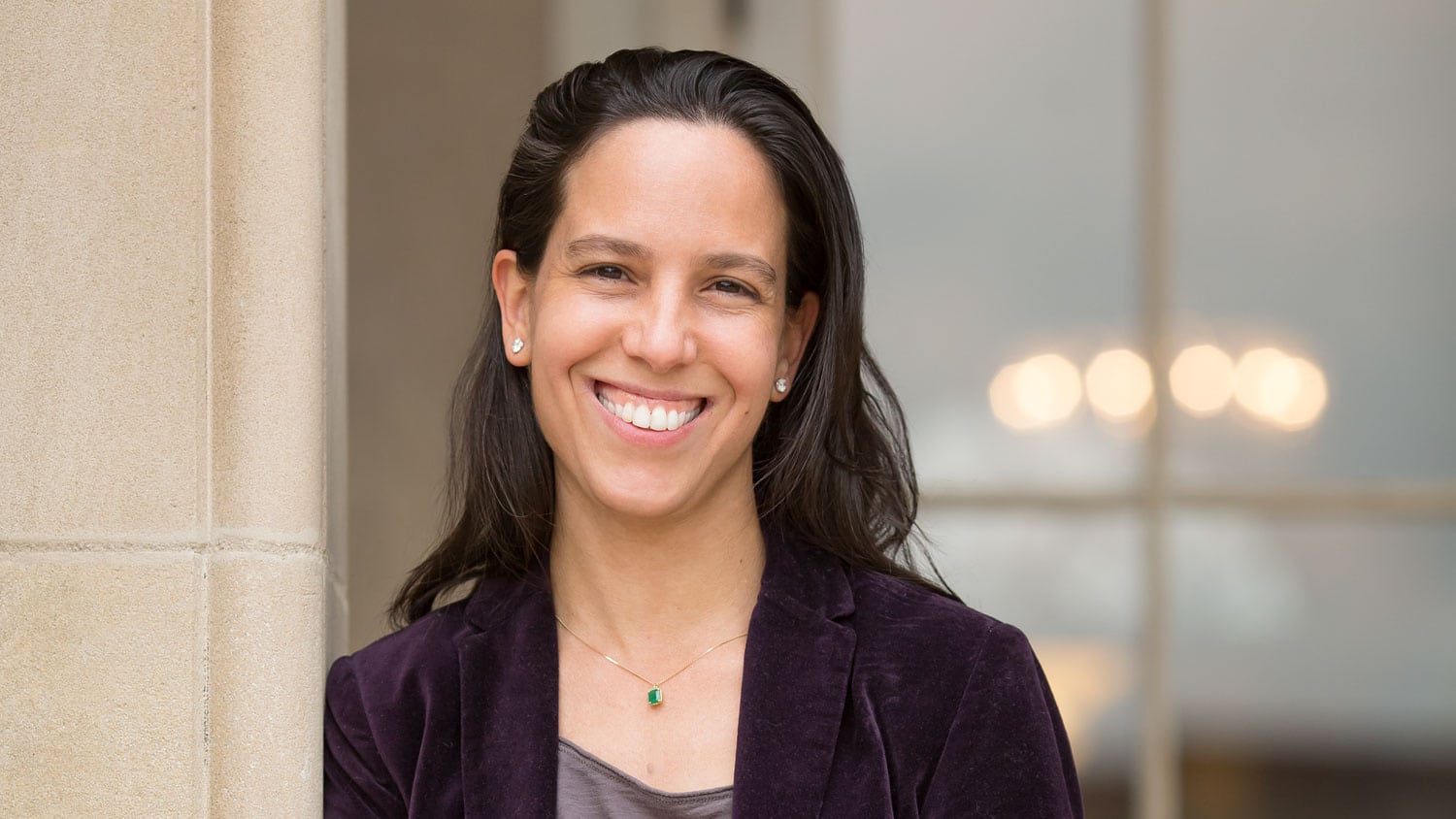 Generally considered one of the most influential physicists in history, Albert Einstein’s (1879–1955) groundbreaking theories reshaped the scientific community’s view and understanding of the universe. He developed the theory of relativity and won the Nobel Prize for Physics in 1921 for the photoelectric effect.

Jimena Canales is an award-winning author and historian of science. Her books include Bedeviled: A Shadow History of Demons in Science (2020), The Physicist and the Philosopher: Einstein, Bergson, and the Debate That Changed Our Understanding of Time (2016), and A Tenth of a Second: A History (2011), which The Guardian named as one of the Top 10 Books About Time. Her essays have appeared in The New Yorker, The Atlantic, WIRED, and other journals. Her latest book is Simply Einstein (2021).

Simply Charly: You’ve published several books and articles on Albert Einstein. What sparked your interest in him?

Jimena Canales: I am fascinated by the myth and the man—how those two aspects interact and the gaps between them. I first approached Einstein after completing a Ph.D. focusing on the history of physics, astronomy, and measurement in the 19th century. What interested me about that period was to see how broad transformations changed, how we thought about ourselves and the universe in a way that we could not pin on any individual or any single discovery. The rise of precision science was a gradual affair involving many individuals—my first book, A Tenth of a Second: A History does not focus on a single character or hero because no one stands out. When we get to the 20th century, one man stands out, making it impossible to write about science without including this towering figure. My training in 19th-century history was a constant reminder that it was necessary to ask why Einstein remains so important, but also understand what changed in the 20th century that permitted an individual to attain such power.

SC: In the preface to your new book Simply Einstein, you state that “adding another line to the preexisting scholarship on Einstein is a daunting challenge for anyone—no matter how well prepared.” How have you met that challenge in this new work? And what may readers expect to learn that’s new?

JC: The challenge of offering an original contribution to knowledge in any topic is a bit of a Catch-22: If there is nothing new said about a topic, is it not important enough? Yet if there is something important, then why hasn’t someone said it already?

Because Einstein is one of the most mined topics in the history of science, the challenge of finding something original and significant about him is harder. We no longer need to concern ourselves with the basic facts of his life, on which all historians agree. For example, we know he was born in Ulm, Germany on March 14, 1879, or we can easily figure that out by Googling it or reading Wikipedia. Research about him has reached a level of detail and maturity that permits for more interesting questions.

One of these is that becoming an icon has repercussions for how people tell his history—it is part of this transformation. Certain strictures that come with our understanding of iconic figures are limiting. We tend to ask, “Big Questions” of “Great Men,” such as, “what did Einstein think about God,” or “what are his views on the atomic bomb, violence, and technology?” Asking “Big Questions” comes at the expense of asking minor ones, such as what we would ask a close friend or a family member we interact with on a quotidian level, that can be more revelatory of personality and life. I am fascinated by tiny details, such as what he does with the bathroom soap in his hotel room. Part of my contribution to Simply Einstein comes from approaching him more intimately and closely than we are accustomed to while simultaneously tracking how he becomes transformed into a mythical figure.

SC: As a historian of science, how does your approach differ from, say, a scientist who deals with the same subject matter?

JC: My work for decades has focused intently on the construction of scientific authority and credibility—a recent and fragile creation. The role of the celebrity-scientist and the scientist as a public intellectual is even more so. Studying the history of these roles reveals radical alternatives. Many scientists, understandably so, prefer to ride on the tailwind of this authority rather than dwell on the difficult historical circumstances that foster or impede it. My outlook is therefore different from theirs, and also from most science popularizers who often serve only as instruments to amplify their voice.

SC: When Einstein graduated from the prestigious Federal Polytechnical School in Zurich, he struggled to find an academic position, finally settling for a junior post at the Swiss patent office two years later. Why was it so hard for him to find a job? And why did this turn out to be, as you write, “a blessing in disguise for his career?”

JC: Einstein was a rebel—and rebels rarely do well in college (let alone graduate school). His attendance at the polytechnic was spotty. He borrowed notes from his classmates; he asked questions that were more bizarre than difficult and was generally irreverent towards his teachers and their approach to science. When he could not get a job in academia, it liberated him from thinking like a stuffy university professor. Plan B turned out to be great for him. Einstein could fight the establishment by delivering blows from the sidelines (the Patent Office in Bern) from which physics has yet to recover.

SC: Except for a few supporters, Einstein’s scientific discoveries met with a lot of resistance in the beginning because of his unusual methods and lack of bonafide academic credentials. Can you elaborate?

JC: Einstein took certain scientific results pertaining to precise measurements of time and space and interpreted them as bearing on time and space in general. Most scientists before him were not used to drawing such grand conclusions from their technical and specialized research. They naturally took Einstein’s conclusions with a grain of salt, often explicitly saying that his original interpretations were valid but not the only way to see things. After failing to convince many of his closest colleagues of the dramatic implications of relativity theory, Einstein awed the public when the results of a well-publicized eclipse expedition were in his favor.

SC: Einstein’s first wife, Mileva Marić, was a physicist and mathematician in her own right, but took a backseat to her husband to raise their children. However, some historians feel she was instrumental if not essential to Einstein’s achievements regarding his annus mirabilis papers. What is your take?

JC: Mileva Marić worked closely with Einstein during the early years, which eventually led to great discoveries. She was close by his side during the fateful year in 1905, known as the annus mirabilis because it marked the publication of four articles that would revolutionize physics. Yet after their relationship fell apart, Marić was no longer his partner in life or science. Other friends and supporters took on that role. Einstein followed through with more than a decade of perspiration from the initial inspiration he got in 1905. Marić was only there at the start of the race.

Many women, including Marić, were essential and necessary for Einstein, but they did not do the scientific work themselves for which he became known. No women at that time had those chances. On the other hand, Einstein could also not do what the women around him could—the man could barely feed, clothe, or clean himself.

SC: How Einstein became a larger-than-life figure is a fascinating tale, especially for someone whose work few understood. When did Einstein’s star begin to rise in the manner that it did?

JC: On November 7, 1919, Einstein went viral, first in England, then in the US, followed by Germany and the rest of Europe. From that day on, he would constantly be in the news. The New York Times has appropriately nicknamed him “the Elvis of science,” and he still makes it to “Top-Earning Dead Celebrities” lists.

Simply Einstein explores how the physicist himself reacted to fame and shows how his success depended on updating the physics needed to explain the new technological world of mass media around him. The universe discovered by Einstein was a complex four-dimensional structure where nothing could travel faster than light. This same universe also permitted his transformation from an all-too-human patent clerk into an extraordinary icon.

SC: The birth of quantum physics in the early 1900s was anathema to physicists of the old rank and order. Even Einstein, despite being one of its founders, had an abiding adversarial relationship with this new way of looking at the world, especially as witnessed with his long and winding debates with fellow physicist Niels Bohr who had fully embraced its principles. Why was it so hard for Einstein to reconcile his view of the physical world with the quantum one?

JC: The answer ranges from the personal to the political to the metaphysical. Some historians focused on Einstein’s personal relationship to some quantum scientists, such as Bohr and Werner Heisenberg. Others focused on the supposed political implications of the science that considers aspects of the universe as essentially indeterminate and uncertain (alleging resonances with “irrational” fascist or right-wing movements). Others see in their disagreement certain unbreachable differences about who God is, or might be, or should be. As a historian, I like to stress that these scientists, including Einstein and Bohr, were not debating some of the basic observational facts of quantum mechanics, nor were they in disagreement about key experimental results. They differed in how you could interpret these, and from that angle, the debate looks more like a battle of large egos than one about incompatible conceptions of the universe.

SC: Einstein was a lady’s man of sorts. He had several illicit affairs, which made his personal life all the more complicated. Can you elaborate?

JC: Yes. From our perspective, his behavior is cringeworthy; what is most interesting to me is how that aspect is a sign of his genius. Scholars who studied his private life found in his affairs and their unapologetic raunchiness a mark of his genius because they show how he flouted social conventions. Others see in them evidence of his superior genetics because of their astounding number. Yet how we have changed our interpretation of that aspect of Einstein’s life is—trust me—a lot more interesting than the lurid details of his many affairs.

SC: Fake news, fake memes, and fake quotes from Einstein proliferate on the internet. How can your scholarship correct the often mistaken conception we have of him?

JC: Despite the many volumes written about him, Einstein remains one of history’s most misunderstood scientists. My hope is to expand our understanding and comprehension of him and his work when presenting his insights in the prosaic ways they first appeared. By focusing on key aspects of modernity that permitted an otherworldly public figure to emerge from a singular life, we can understand how a particular environment became the fertile ground permitting the emergence of an extraordinary man who moved in the same historical, social, and political environments as many others. By doing so, I hope we can begin to bring this otherworldly figure back to Earth.

SC: What do you feel is Einstein’s lasting legacy?

JC: Einstein is a barometer not only for science, but also for the most important founding propositions of modern secular society, where absolute truth, uncontaminated from passion and politics, can be discovered through the appropriate use of reason and experiment, instead of through brute force or divine revelation.

I do not exaggerate in the least when I say that the fate of secular and rational ideals and institutions underpinning most technologically advanced societies is tied to Einstein’s legacy.