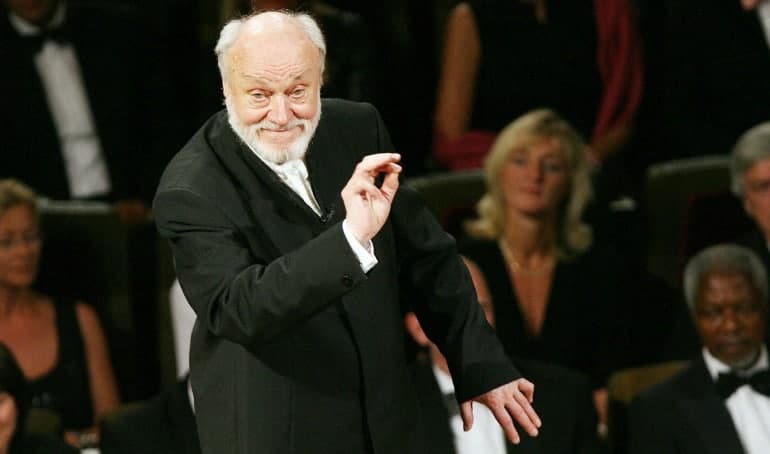 During an international career that spanned nearly six decades, Kurt Masur (1927–2015) made his mark not only as a distinguished orchestra conductor, but also as a political activist.

Masur, who was at the helm of the famed New York Philharmonic from 1991 to 2002, died on December 19 from complications of Parkinson’s disease.

Born in what would become a communist-controlled East Germany, Masur rose to international prominence as the music director of Leipzig’s Gewandhaus Orchestra.

In 1989, Leipzig was a hotbed of anti-communist demonstrations; as tensions rose, confrontations between tens of thousands of protestors and security forces reached a boiling point. Amid the chaos, Masur’s call for a calm resolution of the conflict was blasted on loudspeakers throughout the city. As he later recalled, his intervention was a lifesaver of sorts. Without it, he noted, “blood would have flowed.”

The following year, as the Berlin Wall crumbled and Germany was reunited, Masur directed Beethoven’s Ninth Symphony at the official celebration.

Soon after the reunification, he accepted the conductorship of the New York Philharmonic, transforming it from a fractured and unruly ensemble to a disciplined, concordant, and reinvigorated world-class orchestra. As the Wall Street Journal noted in Masur’s obituary, “he reseated the strings, switching the cellos with the violas, and created a warmer, more relaxed sound.”

In paying tribute to Masur’s accomplishments during his tenure with the Philharmonic—during which he led over 900 performances—its Music Director Alan Gilbert praised the conductor’s “commitment and devotion.”

“What we remember most vividly is Masur’s profound belief in music as an expression of humanism,” he said.

And the Philharmonic’s President Matthew Vanbesien noted that Masur had “left a legacy that lives on today”—just like Handel’s “Messiah,” the performance of which the orchestra dedicated to the late conductor’s memory on the day he died.