MAIN MENU
Literature William Shakespeare
Considered by many to be the greatest writer in the English language, William Shakespeare (1564–1616) was an English playwright and poet. His plays, Macbeth, Hamlet, Romeo and Juliet, King Lear, and Midsummer Night’s Dream among others, have been performed in many languages around the world. 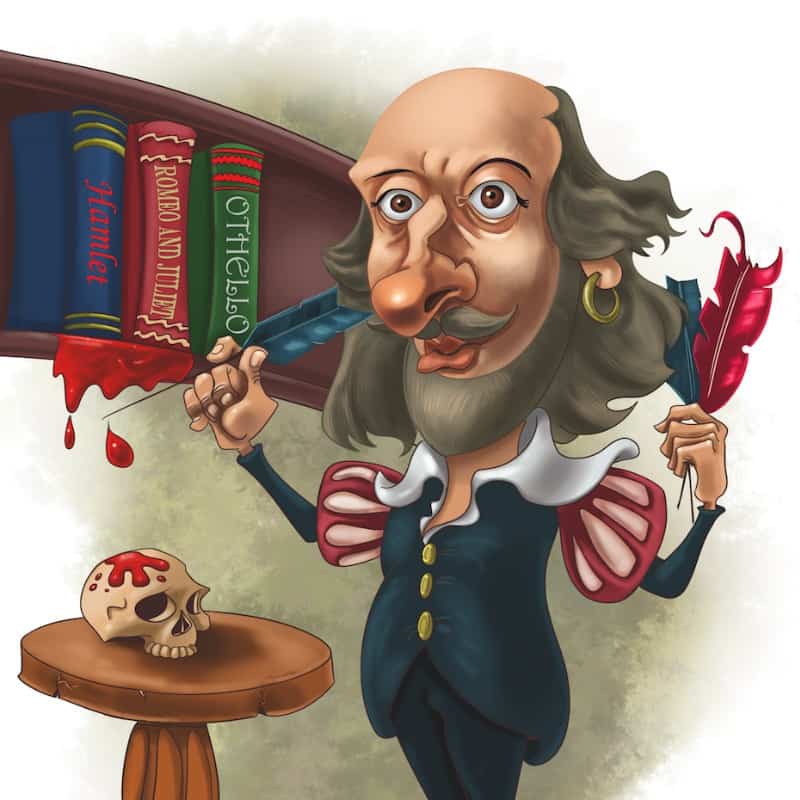 British playwright, dramatist, and poet. Widely regarded as the greatest writer in the English language.

Considered by many to be the greatest writer in the English language, William Shakespeare was an English playwright and poet. His plays, Macbeth, Hamlet, Romeo and Juliet, King Lear, and Midsummer Night’s Dream among others, have been performed in many languages around the world.

William Shakespeare was born and raised in Stratford-upon-Avon, England, and seems to have spent most of his life there and in London. He married Anne Hathaway when he was 18, and they had three children, Susanna (with whom Anne was pregnant at the wedding), Judith, and Hamnet. His actual date of birth is unknown—churches kept records of baptisms more frequently than births, and he was baptized on April 26. April 23 is traditionally celebrated as his birthday, both because it coincides with the date of his death and because that day is the feast day of Saint George, the patron saint of England. If it’s wrong, it’s only off by a few days—English baptisms were nearly always performed within a week of a child’s birth.

Beyond his birth, marriage, and death, most of the details of Shakespeare’s non-professional life are a matter of speculation. His parents were John and Mary, either or both of who may have come from Catholic families (England was at this time Protestant by law, following the creation of the Church of England), and he was the third of eight children. Though not prosperous, his family didn’t struggle: his mother came from an upper-class family, and his father served as an alderman in Avon for a time. William almost certainly attended grammar school (the local school was open for free to all boys), where he would have received instruction in Latin and literature, accounting for the knowledge of the classics and Romantic language he displays in his work.

From 1585 to 1592, referred to by historians as the “lost years,” no record of Shakespeare survives. Though this fact fascinates some readers and historians, it’s about what you’d expect for most residents of England at the time—even when records were kept, many of them wouldn’t have survived to the present day, being vulnerable to fire, water damage, and simple neglect. Though well-known, Shakespeare was never as famous in his lifetime as he has become, and even if he were, history as an academic field just wasn’t pursued in the same way at the time—preserving records of commoners for posterity would have been a strange notion, especially during a cold winter when papers could have been burned for fuel.

Various traditions have developed around Shakespeare’s life—he is supposed to have worked as a teacher, to have done odd jobs related to the London theater, and to have been arrested for poaching deer (just as Robin Hood was)—but there is no mention of these things until long after his death, and are probably the equivalent of George Washington and the cherry tree. We know that by 1592, he was a playwright—because well-known writer Robert Greene dismissed him as “an upstart crow,” deriding his play Henry VI. Interestingly—given Shakespeare’s lack of serious education—what Greene seems most upset by is the Bard’s attempt to rise above his station by writing serious work, rather than just entertainments for the masses.

WORK AS A PLAYWRIGHT

In 1592, an outbreak of the plague closed down theaters and forced Shakespeare to divert attention to his poetry. His poems eventually caught the attention of the Earl of Southampton the following year, and the Earl became Shakespeare’s patron. With the Earl backing him financially, Shakespeare was able formally to copyright his poem Venus and Adonis in the Stationers’ Registrar in 1593; the poem was gratefully dedicated to the Earl for his support.

Throughout the 1590s and the first decade of the seventeenth century, Shakespeare worked as a playwright and actor on the London stage. He was part-owner of Lord Chamberlain’s Men, a company of actors later known as the King’s Men when King James I took over Chamberlain’s sponsorship. The Lord Chamberlain’s Men enjoyed unprecedented popularity throughout the early 1600s, with many of Shakespeare’s plays being printed during his lifetime in small pamphlets costing sixpence.

But Shakespeare was not only a writer; he acted both in his own plays and in those of others, and as part-owner of the Chamberlain’s Men he made a fair profit off of the company’s work. He finally retired in 1613, returning to Stratford, where he died three years later.

We know a good deal more about his plays and poetry than his personal life—though even then, there are plays we are not sure Shakespeare wrote and plays he wrote which have not survived to the present day.

Perhaps the most prominent aspect of Shakespeare’s work is one that has been emulated by many writers to follow him (notably Mark Twain, who supported the “Shakespeare didn’t write Shakespeare” theories): he wrote for the educated man and the “masses” simultaneously. His plays are full of sexual allusions, puns and dirty jokes, violence, revenge, ghosts and witches, romance, betrayal, slapstick, magic, and just plain goofiness—but they also draw on history, on previous plays, and from Greek and Roman legend. Those puns may provide an easy laugh, but they’re also part of a larger approach to language, a deep understanding of it. Shakespeare committed to print hundreds of words, which had never been seen before—more than all other writers of his generation combined.

Now, “committed to print” needs some explanation and demonstrates what makes Shakespeare so interesting. Some of these words were probably in use at the time—in speech. A writer with an excellent ear for dialogue, Shakespeare wrote down a good many words and phrases which were used in informal conversation, but had never before been used in print. But on top of that, he also invented a great many words—not out of whole cloth, but by deriving adjectives from nouns, verbs from adjectives, combining parts of words in ways that simply made sense to him. This was a fluid time in the history of the English language—Shakespeare didn’t even spell his own name the same all the time, nor did anyone else—and people were very receptive to these neologisms, just as new words and slang are introduced every week in the present day, thanks to television, music, and text messaging.

In addition to being the first to coin, record, or popularize such words, many of the phrases he used have caught on and become a common feature of English even among people who’ve never read his plays. “A foregone conclusion” is one such phrase. To vanish into “thin air” is another, as well as “mum’s the word,” “in a pickle,” and “love is blind.”

The impact of Shakespeare’s influence on the English literary world cannot be overstated. Dozens of famous writers have cited him as an influence, including Charles Dickens, Herman Melville, and John Keats, who kept a bust of Shakespeare beside his bed, hoping it would inspire his writings. He inspired as much criticism as he did praise: Leo Tolstoy, Voltaire, and George Bernard Shaw were all well-known for their loathing of the Bard’s works. Shaw, in particular, was fiercely opposed to the worship of Shakespeare that he referred to as “bardolatry.”

Shakespeare’s plays have been translated into 80 languages and performed around the world, and his work has been extensively studied and dissected for nearly 400 years. With films such as 2011’s Anonymous being released, the debate over whether Shakespeare was, in fact, the actual author of his works continues to rage on. As famous author James Barry once remarked: “I know not, sir, whether Bacon wrote the works of Shakespeare, but if he did not it seems to me that he missed the opportunity of his life.”