MAIN MENU
Literature William Faulkner
Along with Mark Twain and Ernest Hemingway, William Faulkner (1897–1962) was one of a crucial group of writers who carved out a uniquely American identity in the world of literature. The winner of both the Nobel and Pulitzer Prizes, Faulkner was one of the quintessential voices of the early 20th century. His library of novels… 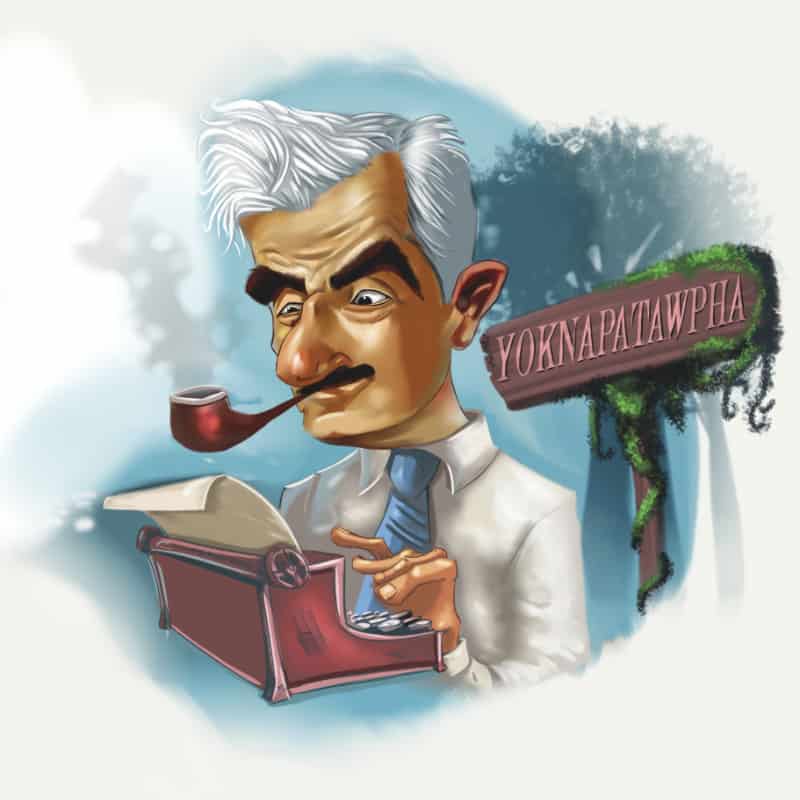 Nobel Laureate and two-time Pulitzer Prize-winner William Faulkner was one of America’s greatest and most celebrated writers, whose work reflects and, at the same time, questions the South’s most deeply held values. His novel The Sound and the Fury is frequently cited as one of the best books of all time, and all of his works powerfully explore complex societal and family issues that continue to be relevant in our own day. Yet, because of his decidedly difficult, stream-of-consciousness style, Faulkner’s books remain sadly unknown to many readers.

Born the eldest of four sons in New Albany, Mississippi, William Falkner named for his grandfather, the “Old Colonel,” and was the scion of the Falkner family. During childhood, William was an attentive student, but as he grew older, his education suffered from a lack of interest on his part; he was forced to repeat two grades, and never graduated high school, which is not to say he was a dull youth: even at a young age, he began writing poetry to pass the time.

Faulkner dropped out of high school to enlist in the Canadian Royal Flying Corps to fight in World War I; in order to fool the RAF into believing he was British, he began spelling his name “Faulkner” rather than its original “Falkner.” His attempt to enlist succeeded, but sadly for William, the war ended the day he graduated. He returned home and enrolled at the University of Mississippi, securing a job as the University’s postmaster. As it had in high school, however, Faulkner’s passion for writing dominated his life to the exclusion of other pursuits, and after three years of lackluster work performance, he was asked to resign. During this period, he submitted poems and short stories to the Mississippian, the campus newspaper.

After the critically panned publication in 1924 of his first poetry collection, The Marble Faun, Faulkner and a friend moved to New Orleans the following year. It was in New Orleans that Faulkner became acquainted with Sherwood Anderson, author of Winesburg, Ohio, who inspired Faulkner to begin writing novels. His first novel, Soldier’s Pay in 1926, was followed quickly by his second, Mosquitos, the next year. At Anderson’s advice, Faulkner began to write about the fictional county of Yoknapatawpha based on his Mississippi. The result of this was a series of some of his most famous books: Sartoris, The Sound and the Fury, and As I Lay Dying.

Faulkner’s personal life was that of the archetypal 20th-century writer, fraught with alcohol abuse, extramarital affairs, and financial difficulty. After struggling to find a publisher for Sartoris, Faulkner decided to give up being a writer as a profession and instead write solely for his pleasure. After marrying Estelle Oldham, however, Faulkner’s income was insufficient to support the family, so he wrote Sanctuary with the sole intention of making money. The novel’s dark, distressing material was so revolutionary for the time that publishers initially refused to touch it.

The 1940s saw the publishing of some of Faulkner’s most controversial works: Light in August and Absalom, Absalom! Both dealt heavily with themes of race and racial identity and were among the earliest popular novels to do so. To support himself financially during this period, Faulkner took up screenwriting for Hollywood. Among these screenplays, only Today We Live was based on Faulkner’s published work. 1940 was also the year that Faulkner began working on the “Snopes” trilogy, one of his best-remembered works.

Although Faulkner’s works were still widely read in Europe, by 1944, they had mostly fallen out of popularity in America. Faulkner worked to correct this, writing a new appendix to The Sound and the Fury and having it re-released by the Modern Library. This, in addition to the Nobel Prize for Literature he won in 1949, brought William Faulkner the financial security and literary credit he had been seeking. He continued to write and gain fame for his works around the world.

In the 1950s, Faulkner traveled the world, visiting other countries while working on his screenwriting. At one point, he served as the writer-in-residence for the University of Virginia, before finally returning to Oxford in 1962. That same year, he passed away from a heart attack at the age of 64.