MAIN MENU
Literature Oscar Wilde
Before James Joyce, there was another Irish writer who took the world by storm: Oscar Wilde (1854–1900), the famously eccentric poet and novelist of the later 19th century. One of the most pre-eminent voices of the Victorian era, Wilde was a London celebrity whose works were read around the world and continue to be appreciated… 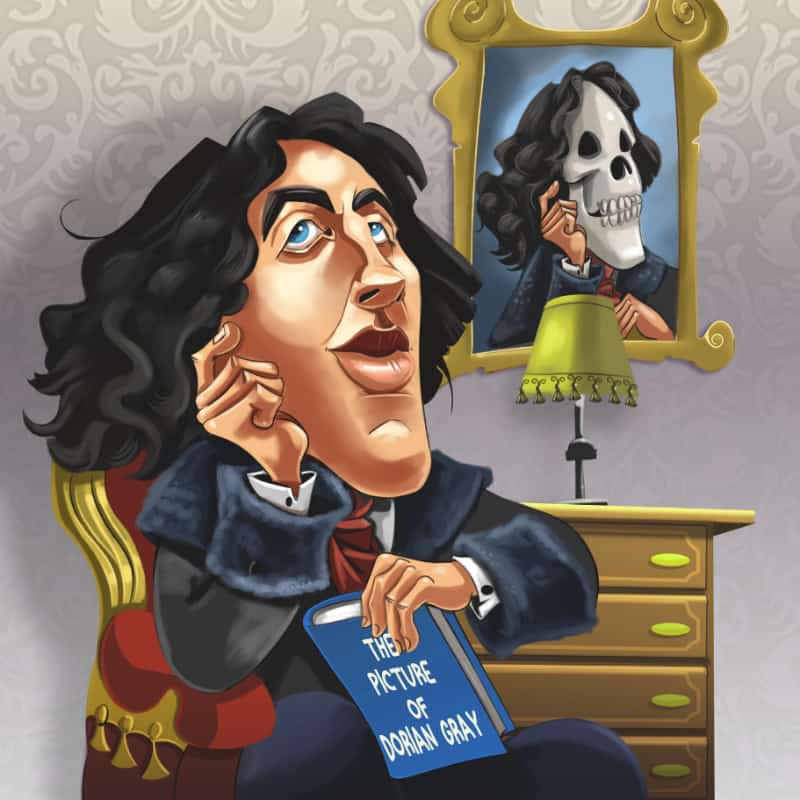 Wilde was born in 1854 in Dublin to a well-off doctor, Sir William Wilde, and Irish nationalist Jane Wilde neé Elgee, who wrote poetry under the pseudonym “Speranza.” From an early age, Wilde was immersed in the world of poetry, literature, and aesthetics, and he would carry an appreciation for beauty with him throughout his life. Oscar was the second of three children; his younger sister Isola would later die at the age of ten, a loss that would scar Oscar deeply.

Wilde was a studious boy who excelled at his schooling, and in 1871, he was awarded the Royal School Scholarship to attend Dublin’s Trinity College. It was while at Trinity that Wilde began to come into his own as a writer: he published his first poem, “Ravenna,” which won the Newdigate Prize, in 1878. It was also during this period that he became involved with the Aesthetic Movement, which proscribed “art for art’s sake.” He kept his hair long, spoke with eloquence, and dressed flamboyantly, a lifestyle that earned him as many enemies as it did friends.

Upon finishing his degree, Wilde moved to London to stay with his friend Frank Miles. It wasn’t long before Wilde had established himself as a vibrant and eccentric figure in London high society. He thrived off the attention he received, publishing a book of poems in 1881 and embarking on a lecture tour in America the following year. Although many Americans were baffled and angered by Wilde’s dress and mannerisms, he found friendship among such great authors as Walt Whitman, whom Wilde grew to idolize.

Upon his return to London Wilde continued lecturing and writing, and married Constance Lloyd in 1884. He fathered two sons, Cyril and Vyvyan. Plagued by severe financial difficulties, he turned to the world of magazines, frequently writing for the Pall Mall Gazette and becoming editor of Woman’s World. He continued writing his own pieces, however, and it was during this period that he wrote his sole novel, The Picture of Dorian Grey.

Wilde’s plays began to hit the stage in 1892 and took the English stage by storm. With hits such as A Woman of No Importance and The Importance of Being Earnest, Wilde’s already-considerable fame skyrocketed, launching him to international celebrity. Sadly for Wilde, this was not to last: he had risen high, but this only meant he had further to fall.

The man who would prove to be Oscar Wilde’s undoing was the Marquess of Queensbury, the father of Lord Alfred Douglas. When the Marquess discovered that Wilde was carrying on a homosexual affair with his son, he left an inflammatory homophobic message at Wilde’s estate. Wilde, enraged, sued Queensbury for libel, but this would prove to backfire horribly.

Wilde’s homosexual affairs had always been something of an “open secret” amidst his social circles, but the libel case gave Queensbury an opportunity to showcase it in front of the law. In order to win the libel case, all Queensbury had to do was prove that his accusation was true; with myriad male prostitutes to act as witnesses and Wilde’s own letters as evidence, he did this with ease. The eye of the authorities rapidly shifted from Queensbury to Wilde, as sodomy was considered a crime in Victorian London and carried a prison term. Wilde, unable to refute the claims, lost the libel case and was forced to pay Queensbury’s legal fees, leaving him bankrupt.

This was not the end of Wilde’s torment, however; upon the conclusion of the libel case, he was immediately arrested and tried for sodomy. Wilde’s former friends among the social elite turned on him fiercely, and his public image as a flamboyant eccentric was twisted to make him seem like a lecherous pervert who preyed on younger men. To be vilified by the same high society he had spent his whole life influencing was crushing to Wilde, and he was sentenced to two years’ hard labor in Pentonville Prison and later the Reading Gaol.

For Wilde, a pampered socialite, prison life was nerve-wracking and torturous. After writing a soul-searching letter to Douglas entitled De Profundis, he emerged from Reading a penniless and spiritually broken man and moved to Paris under an assumed name. He died of meningitis in 1900 and was buried in the Pére Lachaise cemetery in Paris.