MAIN MENU
Leonhard Euler Mathematics
One of the greatest mathematicians of all time with over 800 publications to his name, Leonhard Euler (1707–1783) also played a decisive role in the development of geometry, calculus, mechanics and number theory. 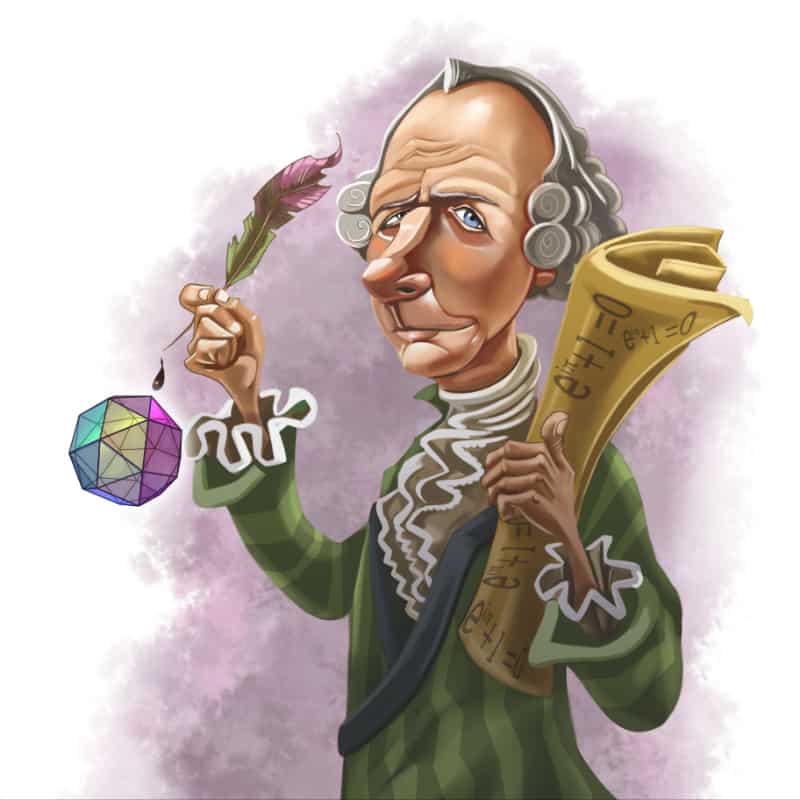 Born the son of a Calvinist preacher in Basel, Switzerland, Leonhard Euler was the first of six children. He was fascinated by numbers from an early age and followed in his father’s footsteps by being tutored in math by Jacob Bernoulli. Unlike his father, however, Euler did not wish to become a theologian and elected to go into mathematics instead.

Neither the first nor last son of a preacher to rebel against his father’s wishes, Euler’s passion for math won out in the end. With Bernoulli’s help, he procured a teaching position at the Saint Petersburg Academy of Sciences. The post was meant to apply mathematical concepts in physiology, a subject Euler knew little about; however, on the day of his arrival the Academy’s benefactress, Empress Catherine I of Russia, died. The ensuing political turmoil allowed Bernoulli to shift Euler quietly into the mathematics department.

In St. Petersburg, Euler lodged with Bernoulli and served in the Russian Navy between 1727 and 1730. In 1733 Bernoulli, fed up with the censorship and corruption he faced in St. Petersburg, returned to Basel, and it was Euler who took his place as the head of the mathematics department. His newfound status granted Euler the opportunity to wed Katharina Gsell, with whom he fathered 13 children; sadly, only five survived to maturity.

Euler’s work was further complicated by his frequent health problems, including a severe fever in 1735 that almost cost him his life. Beginning in 1738, he began to lose his eyesight; certain historians have suggested that he lost sight in his right eye because he stared at the sun too long while trying to solve an astronomy problem. A cataract cost him the sight in his left eye, and throughout the latter part of his life, he was blind. None of this, however, slowed his output: he continued to write his treatises about optics, algebra, and astronomy despite relying almost entirely on memory.

It was while in St. Peterburg that Euler completed some of his most important work; he proved unsolvable the “Seven Bridges of Königsberg” problem that had left other mathematicians baffled by computing an equation that showed it was impossible to form a path that crossed each bridge only once. He also published papers dealing with differential equations and number theory, while at the same time performing projects for the Russian government involving cartography, machine building, and education, among others.

Like his mentor Bernoulli before him, Euler eventually grew fed up with Russian politics, and in 1741, he accepted an offer to teach at the Berlin Academy. Although he continued to work for and receive part of his salary from St. Petersburg, Euler was also well-loved in Germany and found happiness in his work in Berlin.

It soon became apparent that St. Petersburg had only been the beginning of Euler’s output: at Berlin, he wrote over 380 papers, as well as several books in addition to the myriad academic duties he was already performing. Among these was his perhaps most famous work, the Introducio in analysin infinitorum, which dissected analytical geometry and algebraic functions in unforeseen detail. Euler’s fame led to him being appointed the tutor of Frederick the Great’s niece, the Princess of Anhalt-Dessau. His correspondence with her, Letters to a German Princess, reveals much of both Euler’s personal beliefs and his analytical theories.

In 1759, Euler became the leader of the Berlin Academy, but after opposing the ideas of Voltaire fell out of favor with Frederick the Great, who referred to Euler as a “mathematical Cyclops.” In 1766 Euler returned to St. Petersburg after 25 years, and almost immediately afterward would lose his eyesight for good.

Euler’s return to Russia saw almost half of his output being produced despite the loss of his eyesight, writing from dictation. After Katharina’s death, Euler married her half-sister, with whom he would stay for the remainder of his life.

He continued writing and teaching until the day of his death in 1783 when he suffered a brain hemorrhage after a day spent teaching. The Academy at St. Petersburg continued to publish his works for up to 50 more years following his death.

Throughout the 20th century, the definitive archive of Euler’s work was compiled in the Opera Omnia by the Euler Commission of Switzerland. 76 volumes of the Omnia have been published, which contain not only Euler’s published work but also volumes of his correspondence including Letters to a German Princess.

Currently, the main body of Leonhard Euler’s works can be found online at the Euler Archive. Some of his most famous published works include: