MAIN MENU
Emily Dickinson Literature
The “Belle of Amherst,” as Emily Dickinson (1830—1886) was known, was the reclusive, eccentric daughter of an academic New England family. Though known as a poet and prolific letter-writer in life, she published fewer than a dozen of her poems—and not even her family suspected that her carefully kept manuscripts, which she requested be destroyed upon… 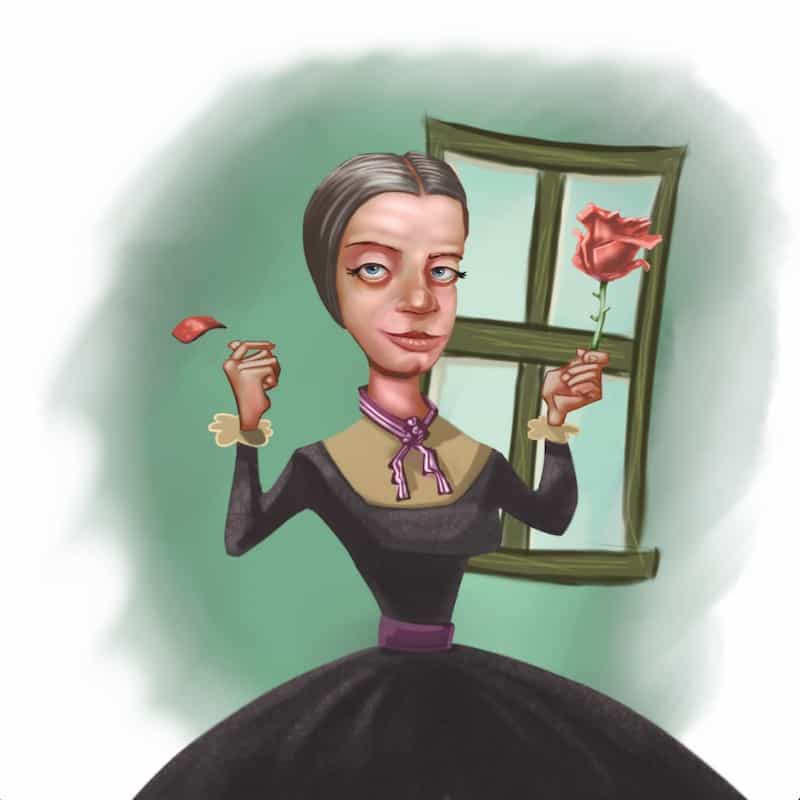 American poet, as famous for her intense privacy as she was for her vastly prolific work.

Emily Dickinson was born to a prominent family in Amherst, Massachusetts, in a part of the state now known for its thriving academic community. Her grandfather had founded Amherst College, for which her father served as treasurer while also representing the region in Congress. Well educated for a woman of her time and well read by anyone’s measure, she rarely left her hometown, and, later in life, secluded herself in her bedroom.

As a child, Emily was the well-behaved middle child, with an aptitude for music and the classical education so important to her father. She and her younger sister Lavinia were among the first female students at Amherst Academy. As a teenager, she was among the town citizens who participated in the 1845 religious revival, but her conversion to fervent Christianity turned out to be a passing phase, as she stopped attending church a few years later. Emily was sometimes a melancholic, depressed teenager, especially following the death of her friend and cousin Sophia, who spent her last weeks bedridden with typhoid fever. Her schooling was interrupted several times, both by her own illnesses (some of which may have been bouts of depression) and by a prolonged visit to family in Boston, where her parents sent her in an attempt to revive her spirits following Sophia’s death.

Emily spent a year at Mount Holyoke Female Seminary (a women’s college that became Mount Holyoke College, in nearby South Hadley), but disliked the religious outlook of the school. When she returned home, she became a homebody. A friend, local lawyer Benjamin Newton, further broadened her knowledge of literature. Melancholy soon struck again when the principal of Amherst Academy, who had become a friend, died. A few years later, Emily’s mother became bedridden with chronic illnesses, which kept her confined to her room until her death in 1882. Domestic chores became Emily’s responsibilities; her sister had an active social life, and her brother William had just married Emily’s close but difficult friend, Sue Gilbert.

Emily began to withdraw from the world, occupying herself with the considerable task of keeping the Dickinson household running while working on her poetry and reading. Though it was no secret that she wrote, not until her death—and the discovery of her carefully maintained manuscripts—did anyone realize the extent and breadth of her work. She maintained many contacts through correspondence, in which she sometimes appeared grandiose, sometimes gnomic, and often dramatic—a great contrast to her secluded life.

Even though she often wrote passionately about romance, there is no record of Emily ever having had a relationship. There are, however, some indications that she might have been in love with Samuel Bowles, editor of the Springfield Republican, as well as with her father’s old friend, Judge Otis Phillips Lord.

By the late 1860s, Dickinson left the house very seldom, and when she did venture out,  she drew attention for dressing all in white. When visitors came to the house, she sometimes spoke to them only from behind the door. Her correspondence with various friends and acquaintances, however, picked up dramatically, and her family decided to respect her need for privacy, despite the way her eccentric behavior attracted town gossip. Her parents died within a few years of each other, and her brother’s marriage to Sue crumbled, particularly after the death of their youngest son, to whom Emily had been close. She became sick soon after and died of respiratory illness.