MAIN MENU
Anton Chekhov Literature
Russian physician and writer, Anton Pavlovich Chekhov (1860–1904) is considered to be one the greatest short story writers, as well as a masterful dramatist and satirist. His works focus more on the character and mood rather than action, and tell the story of ordinary events and relationships in small towns and villages of the 19th century Russia. 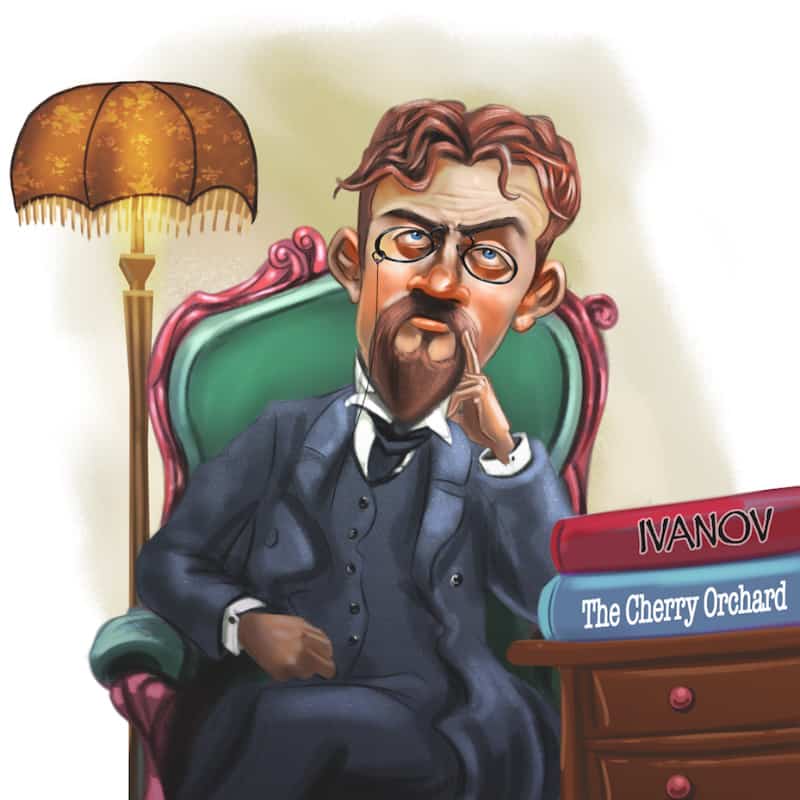 Russian physician and writer, Anton Chekhov is considered to be one the greatest short story writers, as well as a masterful dramatist and satirist. His works focus more on the character and mood rather than action, and tell the story of ordinary events and relationships in small towns and villages of 19th century Russia.

Anton Chekhov was born to a lower-middle-class family in Taganrog, Russia; he was the third of six children. His grandfather, a serf, bought his and his sons’ freedom, and Chekhov’s father, Pavel, became a grocer. Pavel was a religious fanatic who terrorized Anton and his older brothers Alexander and Nicolai. He made the boys work long hours in his grocery store, which eventually went out of business in 1875. Chekhov’s mother, Yevgenia, taught him to read, write, and tell stories. When he was eight, Chekhov attended grammar school, where he earned a reputation for pranking and satirical comments.

When the grocery store went bankrupt, Pavel moved to Moscow, where Alexander and Nicolai were studying. Yevgenia stayed in Taganrog with the younger children until July 1876, when they could no longer afford their house. She moved the family to Moscow, leaving Anton to finish his education and sell the house.

In 1879, Chekhov moved to Moscow to join his family and to study medicine at Moscow University on a scholarship. To bring in more money, he wrote weekly comics for a lowbrow magazine under the pseudonym Antosha Chekhonte. The two-and-a-half-page limit molded his style of short stories. Between 1883 and 1885, he wrote concisely, publishing his only serialized novel The Shooting Party (1884).

His style developed as plotless, focusing on characters’ inner emotions and crises rather than on events or actions. Though considering himself a comic satirist, the producers of his plays regarded his works as dramas. Chekhov argued with them during theater rehearsals, disagreeing over which threads of emotion the actors should emphasize. Today, his works are known to be a combination of tragedy and farce.

In 1885, Chekhov sent his ironically comical stories to be published by The Petersburg Gazette, which had no length or content restrictions. By the next year, he established himself as an up-and-coming author, though his writing was still little known outside of Russia. In The Witch, Heartache, and Grisha, all published in 1886, he developed a literary technique called a stream of consciousness, detailing elements straight from the minds of his characters and evading a judgmental narrative voice.

His refusal to pass judgment on his villains sparked criticism from some readers, and audiences – Russian literature of the time emphasized life instruction, a component that was missing from Chekhov’s works. He believed that “the writer should be as objective as a chemist… The artist must be not the judge of his characters and of what they say, but merely a dispassionate observer.”

All the while, medicine was his primary profession, and he was known to have called it his wife, while writing was his mistress. Chekhov wrote to keep afloat of debts his family fell into, especially his two older brothers. He took a trip back to Taganrog, also visiting the Steppes and eastern Ukraine for a bit of vacation. The journey inspired him to write The Northern Herald (1888), his first serious literary undertaking. Though it was considered too “plotless” to be published, it was the first work written in his “mature style”—comic satire showing the unhappy existence in the turn-of-the-century Russia. The same year, his collection of short stories, In the Twilight, received the Pushkin Prize, awarded by the Russian Academy of Sciences to the most distinguished of the country’s authors.

In 1887, Chekhov began writing theatrical screenplays. He wrote two one-act plays before his four-act, Ivanov, was produced. It is an innovative contribution to modern theater, depicting a dying wife with a cheating husband who is never shown in a bad light, demonstrating Chekhov’s abilities in objectivity. While his plays were praised, Chekhov himself was never satisfied and went back to writing shorts.

He began to incorporate his medical experience into his stories, using, in particular, his knowledge of labor pains to intimately describe a miscarriage in The Name-Day Party (1888). That summer, his brother Nicolai passed away from tuberculosis, the same disease that would later take Chekhov’s life. His play Wood Demon was only performed three times before being canceled, and critics were bashing Chekhov’s unorthodox writing. By April 1890, he decided to visit Sakhalin Island to report on conditions there and take advantage of a change of scene.

He stayed there until October, when he sailed to Hong Kong, Singapore, and Ceylon before arriving back in Moscow. The trip inspired two works: In Exile (1892) and Murder (1895). In 1891, Chekhov visited Italy and France, inspiring An Anonymous Story (1893) and Ariadne (1895). That summer, he settled in a village of Bogimovo, where he worked on Sakhalin Island (1894), a comment on the prison system, and published The Duel. By September, he was back in Moscow working on The Butterfly (1892).

The next March, he moved with his family to a country estate they occupied until 1899. Chekhov treated sick locals for free while financing schools and measures against cholera. His time there inspired Peasants (1897), which, again, drew criticism for his objectivity and lack of sentimentality in describing peasants’ misfortunes, though the Marxists (who were active in Russia at the end of the 19th century) appreciated it for its accurate description of the class gap.

In this rural setting, Chekhov wrote Ward Number Six (1892), which was seen as a comment on repressive society. During the last decade of the 19th century, he produced a number of pieces that became classics, including The Seagull and Uncle Vanya.

While Chekhov had several mistresses, he was not serious about any of them – he regarded sex as a contributor to senility. Given his limited love life, he modeled the relationship between the characters in The Seagull after a married friend’s affair with an actress, rather than his experiences. Relatively late in life, in 1901, Chekhov married actress Olga Knipper, who starred in his plays and, unlike his critics, apparently understood the subtle meanings of his works.

In 1897, Chekhov was hospitalized for bleeding in the lungs. He had previously experienced symptoms of tuberculosis but, though a doctor himself, refused treatment. Despite his illness, he worked on Nevesta (1903) and The Cherry Orchard (1903). By the time Orchard opened in Moscow in January 1904, Chekhov’s lungs were ravaged, and he was physically frail. He died of a heart attack on July 14 of that year.