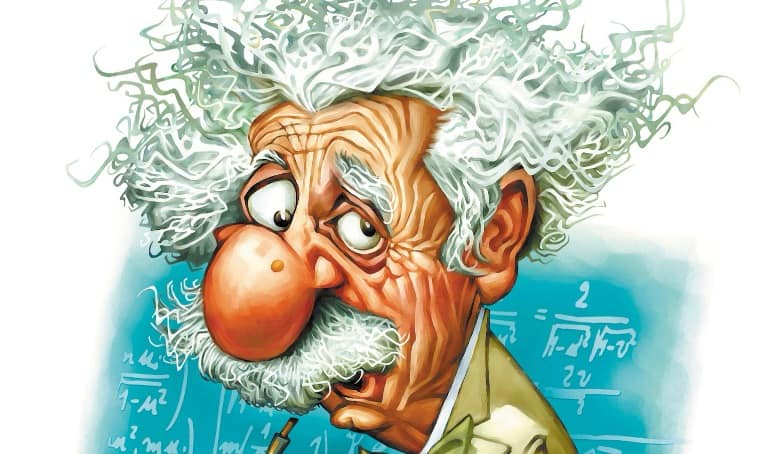 1. Does a big head equal a big brain? Maybe, maybe not. But when Albert Einstein was born his head was so unusually big doctors were worried he would be mentally deficient. When Einstein died in 1955, that very same brain fell into the possession of Dr. Thomas Harvey, former Chief Pathologist of Princeton University. Later studies revealed that Einstein’s brain contained more glial cells in the region responsible for analyzing information.

2. Haven’t you always wondered how one of the greatest minds of the twentieth century flunked out of school as a kid? Well, that’s because he didn’t. Recent studies have debunked this modern legend, noting that he had done quite well in math, and loved studying philosophy.

3. It is true, however, that it wasn’t until young Einstein was nine-years-old he spoke in full sentences. This process of developing language internally, not uncommon amongst especially bright children, is now called The Einstein Syndrome.

4. Einstein was a self-proclaimed pacifist, but some of his actions may have been misinterpreted. Especially by J. Edgar Hoover, who set out on an intensive campaign to be sure that the scientist wasn’t contributing to the making of the atomic bomb. Perhaps this was spurned by Einstein’s famed 1939 letter to President Franklin D. Roosevelt, urging him to complete an atomic bomb before the Germans did it first. Einstein may have been against war, but was pro preparation if necessity called for it.

5. So sure was he that E=MC2 was irrefutable, Einstein went ahead and declared that mass was a form of energy, a theory he actually wouldn’t formally prove until years later.

6. When he received the Nobel Prize in 1922 for his work on photoelectricity, he didn’t show up at the awards ceremony, as he was visiting Japan.

7. “Going once.going…twice.” Einstein may have written his paper on special relativity in 1905, but he hand wrote a copy of the paper in 1944 to be sold at auction. The highest bid? Six million dollars, all of which went to support the war effort. The paper is now in possession of the Library of Congress.

8. That’s not to say he put his faith in money. In 1934, he wrote: “I am absolutely convinced that no wealth in the world can help humanity forward, even in the hands of the most devoted worker in this cause.”

10. When Einstein died on April 18, 1955, in Princeton, NJ his final wishes were honored—there was no funeral, no grave, and no marker. His ashes were spread in a New Jersey river.