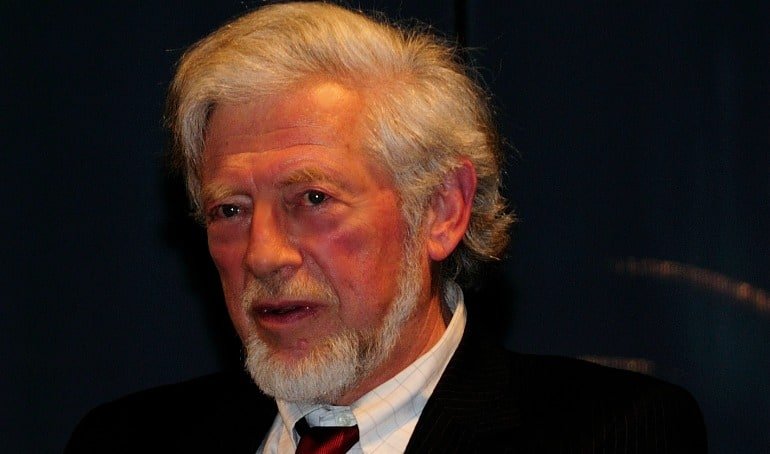 Werner Heisenberg (1901–1976) was a German physicist and the creator of the “Heisenberg uncertainty principle.” In 1932, he was awarded the Nobel Prize in Physics for inventing quantum mechanics. During WWII, he was commonly believed to have spearheaded Nazi Germany’s effort to build an atomic bomb, a charge that his son, Jochen, denies.

Jochen Heisenberg is a German physicist specializing in nuclear physics and Professor Emeritus of Physics at the University of New Hampshire.

Simply Charly: As a nuclear physicist and Professor of Physics at the University of New Hampshire, it can be reasonably said that you’ve followed in your father’s footsteps. Has it proven difficult for you to get out from under your father’s shadow?

Jochen Heisenberg: Essentially, it has been impossible to get out of my father’s shadow. Everyone in this field knows of him. This knowledge moves to the background with my musical friends. Of course, I am aware of the influence he had on my musical activity, but for my friends that is secondary.

SC: One of your father’s crowning achievements was the uncertainty principle. Could you briefly illustrate what this term refers to?

JH: Again, there are two aspects to this. First on the formal side: the formalism of QM has been established with great accuracy, so we know that this theory describes the world of small particles much more precisely than Newtonian mechanics. In QM, however, it is impossible to mathematically construct a state that has a precise position, as well as a precise momentum (velocity). Therefore, such states do not exist. And each state has the innate property that not both position and momentum are precisely defined.

To make this plausible (for example, to Einstein), they discussed measurements of, e.g., position. Such measurement would typically require a microscope. These are normally limited as they start to fail when one tries to measure more precisely than the wavelength of the light. To improve precision, experimenters use electrons of higher and higher energy as that reduces the probing wavelength. But with the high energy, the impact on the object gets bigger and bigger, so that we know less and less about its velocity. However, the uncertainty in a measurement is not identical to the innate uncertainty in a state.

SC: What sort of political pressure did Werner and other German scientists face during the early 20th century? Why did he choose to remain in Germany despite being attacked as a “white Jew” by the Nazis?

JH: The episode when he was attacked as a “white Jew” was part of a conflict about university positions between experimental and theoretical physics, the latter being more accessible to Jewish physicists at that time. He managed to silence these implications through a coincidence: Werner’s grandfather was Principal of the Max-Gymnasium, and Werner’s mother participated in a hiking group (club), making bi-weekly excursions into the surroundings of Munich. One other member of that club was Himmler’s mother, who came from a different school of Munich. On one of these hikes, the two women talked mother to mother, agreeing that Werner did not deserve these rumors. That exchange found its way to Himmler, who stopped the attacks. Also, in an interrogation of Werner, he convinced the interrogators that the physics of relativity was correct, and German youths needed to learn this at the university. As a result, he was allowed to continue teaching relativity as long as he would not mention Einstein’s name.

The emigration to the US was a serious consideration since he did have offers from Columbia University and the University of Chicago. He discussed that question with Max Planck. He thought it would be proper to stay and form pockets of decency, reducing the influence of the Nazis on these pockets. He thought that a project on energy production through nuclear reactors would give him sufficient legitimacy to achieve this. His experience of how to survive a world war originated from WWI. The reality for the population in WWII, however, was even worse.

SC: What, in the end, was the reality of the German atomic project? Did they ever come close to obtaining nuclear power? How did Werner contribute to the project?

JH: The scientists working under Werner’s leadership were trying to build a nuclear reactor. Such a device would be useful as a source of power after the war. There was little fervor as the assumption was that after the war more resources could be attributed to such a project. At Haigerloch (the site of the German nuclear program during WWII), they did measurements that allowed them to extrapolate how much heavy water was needed and how much Uranium could lead to a sustained chain reaction. That was pretty much the situation, when the Alsos mission, the Allies’ project to create an atomic bomb led by Samuel Goudsmit, arrived.

SC: One thing you’ve mentioned in several interviews was your father’s passion for music, something most people don’t usually associate with theoretical physicists. How did music influence Werner’s life? Did he have any musical preferences?

JH: Werner was a pretty good pianist. In his youth, he accompanied his father in many songs by Schumann, Schubert, Brahms, or Hugo Wolf. He passed on his love for music to us kids, and we played piano trios with my brother Wolfgang on the violin, me on the cello, and him on the piano. The favored classical composers: Haydn, Mozart, Beethoven, Brahms, and Dvorak. He appreciated the simple structure of the classics but felt uneasy with too much emotional content of the late romantic period.

I can truly state that he launched us kids into a life with music that stayed with us all these years.

SC: Premiering in 1998, Michael Frayn’s play “Copenhagen” addressed the 1941 meeting between Werner and Niels Bohr at the titular Danish capital. How did the release of “Copenhagen” stimulate the discussion about Werner Heisenberg? What were your feelings on the play?

JH: In my opinion, Frayn has shown more insight into my father’s world and thinking than any biographer up to now. There are, of course, exaggerations, which upset me, but I can tolerate that for the interest of the play. Frayn also tries to bring across the physics of the uncertainty principle. This is a daring effort that is difficult for me to judge. But I think he gives a good description to the uninitiated.

SC: Bohr and your father established a long-lasting working relationship during the years leading up to World War 2. Did that relationship endure after the war and the meeting in Copenhagen? Were there any other prominent physicists—say, Albert Einstein—with whom Werner established a friendship?

JH: My father had a deep friendship with Niels Bohr—a friendship built on reverence. In some ways, he was a father figure, someone who had achieved a tremendous advance in our understanding of the quantum world and with whom he also shared the love for poetry, music, history, and philosophy.

My father knew Wolfgang Pauli even longer than Niels Bohr. Since Pauli was a very different person, also the friendship was very different. They were of similar age, met already as students in Arnold Sommerfeld’s seminar, and Pauli had the role of critiquing my father’s work even into advanced years.

An important friendship existed with Carl Friedrich von Weizsaecker. Weizsaecker had worked under my father on several physics problems, they shared the philosophical consequences posed by quantum mechanics, and on that level, they understood each other. I remember listening to their discussions over afternoon tea in the Munich house about how a measurement changes a possibility into a reality.

SC: Part of what made Werner such a compelling figure was the way in which he bridged logical science with the abstract- one of his works is entitled Physics and Philosophy: The Revolution in Modern Science. How did Werner’s work with quantum mechanics influence his philosophy? What exactly was the “revolution” he was referring to?

JH: This revolution occurred on several fronts. He tried to summarize these changes in 1942 in an essay “Reality and its Order.” He pointed out those words lose their traditional meaning with the new results in atomic physics. We now use the words “particle” and “wave” for the same object. We can no longer ask if it is one or the other. Now it is both.

Another feature to which Einstein objected strongly is that we can no longer predict the outcome of an experiment. Instead, the theory of QM gives us probabilities. Of course, if we measure a specific outcome, this is now a certainty, and thus the state after the measurement is different than the state before the measurement.

SC: In an interview with the German magazine “Der Spiegel,” upon being questioned about Hiroshima, Werner remarked that “I have learned that scientific discoveries lend themselves not only to positive but also to terrible consequences.” What do you believe is the moral role of scientists in preventing their creations from being used for evil? Is there one?

JH: There are two parts: First, there is the discovery, which leads to an investigation of the discovery and of its consequences. As professionals, we expect scientists to do just that.

In the second part, it is the responsibility of society at large to decide what to do with the discovery.

Scientists do not have a monopoly on discoveries, and other scientists in other parts of the world can make the same discoveries. We cannot burden scientists with decisions on the ethical implications, but we require the truth, free of self-interest or other political interests.

My father’s ethics was to keep this destructive development out of WWII. As such developments were too big an effort for Germany at that time made his arguments believable and ultimately proved to be correct. Yet such weapons were not kept out of the war.

SC: What are some of the more glaring inaccuracies concerning your father’s life and works that you’ve encountered? Are there any common misconceptions about him that you feel need to be cleared up?

JH: Many people like to believe my father was trying to build nuclear weapons, but failed. They like to believe this in spite of all the documents showing otherwise. This misconception leaves the impression that such views serve as an excuse for the US trying to develop such weapons, having success, and then using them.