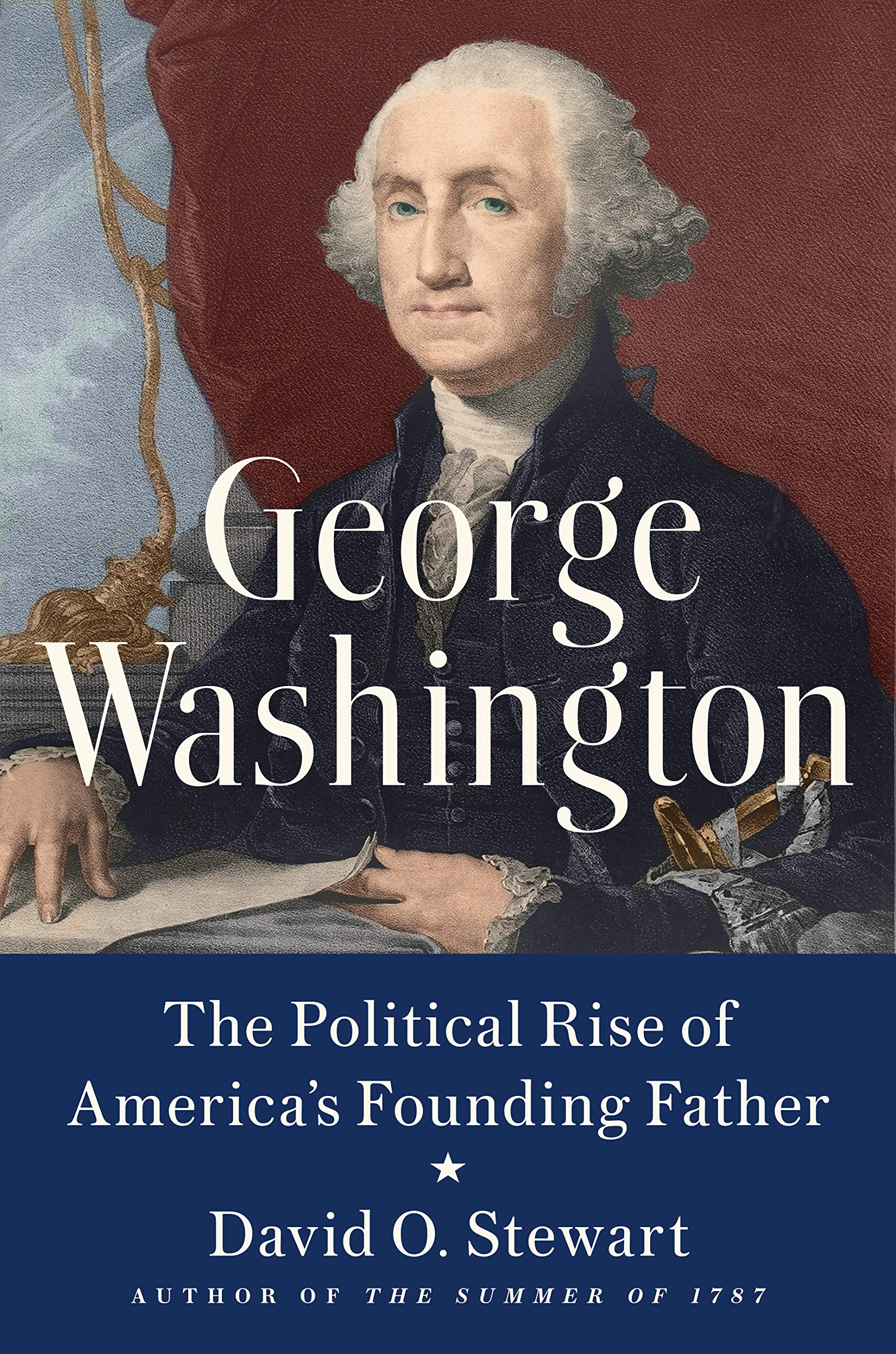 With so many biographies of George Washington available, it is not so much a matter of having something new to say but approaching the subject from a singular perspective: a biography with a thesis. David O. Stewart, the author of well-received biographical studies of Aaron Burr and James Madison, argues that George Washington emerged out of the fraught conflicts with the French in colonial North America, and during many years in Virginia’s House of Burgesses, as a master politician—the greatest politician this country has produced.

In his early twenties, Washington quickly established himself as a national public figure, distinguished by his bravery and commanding martial appearance, if not by military victories. In fact, he was rash and impolitic; demanding offices and commissions that his British lords and masters rejected. He offended the Royal Governor of Virginia and sulked his way into fame. Unusually tall and an excellent horseman, he looked the part of a leader, even if the actual record of his accomplishments remained unimpressive. Stewart astutely shows that Washington carried himself like a hero and that American colonials projected into him the very virtues of leadership that he had yet to perfect.

How did an irascible young man on the make without, to begin with, a fortune or high pedigree, ascend the political ladder? He married well and was lucky that neither bullets nor his rashness brought him down. Stewart contends that quitting the military and entering the House of Burgesses changed him. Washington had to learn his place, work behind the scenes with other legislators, and understand the process by which laws were passed and people governed. He was not well educated and wisely refrained from many public utterances. When he did speak, he was well informed and measured. He seemed to have realized that it did no good to alienate his superiors and that it was much better to present himself as in service to others and work for the public welfare, not his career. In short, this was an ambitious man who studied how not to look too ambitious. Like Cary Grant, he understood it was better to be pursued than to come across as a pursuer. This analogy is not far-fetched. Stewart makes a big deal about Washington’s attraction to the theater and actors and that he learned how to stage his entrances and exits to create the desire to see more of him.

Stewart does not make the connection, but I think Washington’s interest in uniforms—he designed several of his own—may also have derived from his avid theater-going and observation of the costumery of character. Like another fellow Southerner, William Faulkner, Washington showed up in uniforms even when they were not particularly called for. Here is where Stewart’s wit comes into play when Washington came to Philadelphia to attend the Second Continental Congress in May 1775:

The image of Washington in full uniform, striding the streets, socializing, and attending congressional sessions, carries the strong whiff of a man intent on high command. Possibly he wore the uniform to show his commitment to the cause, although the image calls to mind the guest who arrives with a guitar slung over one shoulder, desperately hoping that someone will ask for a song. Yet no delegate seems to have found the uniformed Washington ridiculous. Despite statements about how unworthy he felt for command, he pursued that command avidly.

There were objective reasons not to laugh at Washington. He had more military experience than any other American colonial. He had civil courage, as well, standing by American protests against taxation without representation, with confidence that the British could be beaten. After all, he had seen plenty of examples of British ineptitude on the battlefield. The British never really understood that the American terrain would require a different kind of fighting, not in traditional rows and ranks that would be decimated in a kind of guerrilla warfare the colonists had learned from Native Americans.

While Washington craved power and position, he was also quite content to relinquish titles and privileges, which astounded his contemporaries, American and British alike. And this is where his politicking was most effective. He declined offices and appointments even as they were pressed upon him. He always had his establishment, Mount Vernon, to repair. (It often required repairs, neglected during his days in the military theater and later in the theater of national politics as the first president.)

Another factor in Washington’s rise that Stewart mentions, but is perhaps even more important than he acknowledges, is Washington’s willingness to go beyond his Virginia connections to forge bonds with men as different as Alexander Hamilton and the Marquis de Lafayette. The former was an immigrant from an undistinguished background that other founders like Thomas Jefferson and John Adams scorned. Virginians, as William Faulkner pointed out during his residence at the University of Virginia, are quite proud and even snobbish about their primacy in both Southern and national history, and yet Washington seems to have been without those affectations.

Where Washington was a man of his time and region, Stewart points out, is in his ambivalence about slavery. Stewart can find no record of Washington’s doubts about slaveholding before the American Revolution. He owned, physically punished, and aggressively went after runaway slaves; managing something like 700 of them at Mount Vernon—about the same number of African American soldiers under his command at Valley Forge. Only when teamed with Lafayette—another crucial friendship that Stewart might have emphasized a little more—did he see the shame of owning human beings; a shame that could be assuaged, Lafayette argued, by freeing them. While it is true Washington freed slaves in his will, Stewart sees Washington’s reluctance to do more to abolish slavery as, of course, a moral lapse but in terms of the biographer’s thesis also a tremendous political failure:

The slave system posed the greatest test of Washington’s political skills. For virtually all his life, he failed it. He made no public statement nor took any public action that questioned the legitimacy of slavery, fearing that it would upend the republic for which he sacrificed so much. On the most pressing moral question facing the nation, its greatest leader did not lead.

While Washington had political capital, he was not willing to expend it on behalf of African Americans. Stewart does not make the point, except in references to schemes that would resettle slaves in Africa. Washington, like another of Stewart’s subjects, James Madison, could not envisage a society founded on racial equality. Stewart is right in his conclusion that George Washington “established a model of wisdom and integrity by which every successor would be judged,” yet that model has not been enough to rectify what Stewart calls, in a chapter title, this nation’s “Wrestling with Sin.”