William Faulkner: Seeing Through the South 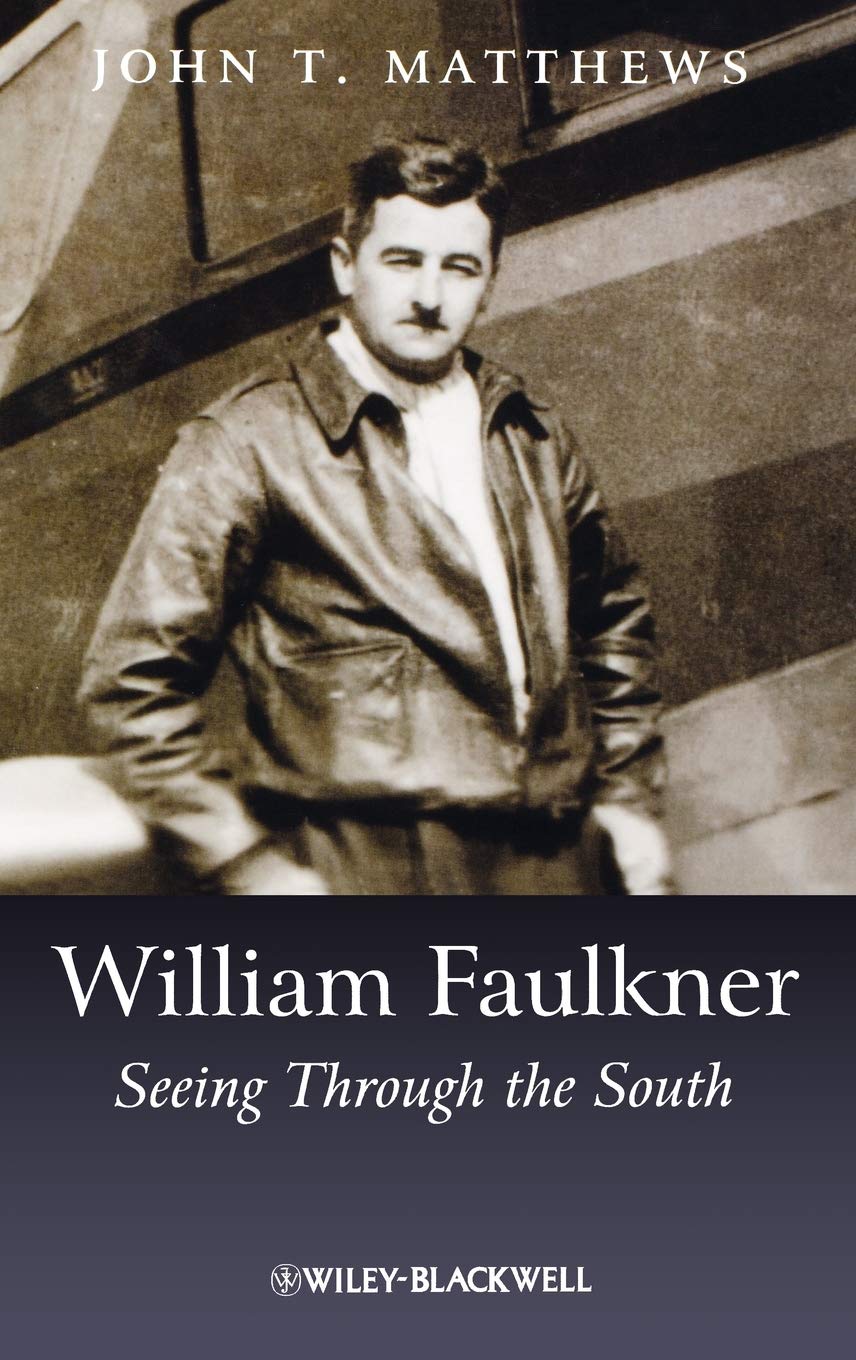 William Faulkner: Seeing Through the South

John T. Matthews, a Professor of English at Boston University, discusses all nineteen of William Faulkner’s novels and many of his notable short stories in his book William Faulkner: Seeing Through the South. He focuses on the author’s themes surrounding the South becoming modern while it faces the sins of its past. Matthews even argues that this transition was not as abhorrent to Faulkner as many of his critics have previously asserted.

Matthews is a foremost scholar on William Faulkner, having published The Play of Faulkner’s Language and two edited volumes, William Faulkner in Context and The New Cambridge Companion to William Faulkner. He also teaches regularly on Southern literature and modernist and literary theory. Though he admires Southern authors, Matthews seems to have a certain scorn for the South, even calling Faulkner’s Mississippi “the most backward state in the Union.” (1).

Admittedly, Faulkner had a fascinating love/hate relationship with the South and its heritage of slavery, racism, and miscegenation as his characters are often haunted by sins of the past. Matthews writes in great detail about how Faulkner’s characters deal with the changes to the old order that they have had as the very foundation of their lives. For instance, Horace Benbow in Sanctuary must face disillusionment as he comes to understand the new order represented by Temple Drake and Little Belle, which is cold and predatory, even machine-like. Matthews details how Faulkner’s characters like Horace Benbow and Quentin Compson of The Sound and the Fury, Absalom, Absalom!, and “That Evening Sun” cannot hope to thrive and even survive in this new South. The theme of many of Faulkner’s works “is a shamed repudiation of the sins of the fathers, accompanied by a keen resistance to the shifts of modernity” (41). Matthews explores these themes through all of Faulkner’s novels even his more obscure ones like Mosquitos, Flags in the Dust, The Wild Palms, and A Fable which rarely receive such a rigorous critical review even within the world of Faulkner criticism, though these works do deserve such exploration.

In his chapter “Come Up: From Red Necks to Riches,” Matthews writes about the new order that threatens the established families of Yoknapatawpha County like the Compsons and Satorises. This new “clan of dirt creatures” (124) is best represented by the Snopes family who appear throughout many of Faulkner’s novels and short stories, first appearing in “Spotted Horses.” In this humorous story, the family tries to defraud the community by selling wild horses to them. Chaos ensues, and the spotted horses run throughout Faulkner’s works in much the same way that the Snopes are trampling without restraints in this new world order. Ab Snopes, seen in “Barn Burning,” has an obvious hatred for the landed Southern gentry whose wealth is built on the backs of others. His scorn caused him to soil the De Spain’s rug and start a campaign of barn burning as a “means to express his rage” (127). Matthews writes about the full evolution of the Snopes family in Hamlet, which deals with the rise of Flem Snopes as the new head. Flem does not have Ab’s anger. Instead, in his cool and calculating way, he takes over the local bank and the community it serves. Matthews details the gross commercialism of mentally challenged Ike’s love for a cow and subsequent bestiality that is too much for Ratliff even to profit from. In this chapter, Matthews writes about how Faulkner explores the lengths to which this new order will go to gain money and power and lays some guilt on those who enable their vulgar endeavors. Matthews thoroughly explores these themes in all of his chapters as he eloquently writes about Faulkner’s characters and themes in a book displaying an important contribution to Faulkner scholarship.

Matthews explores new world colonialism and Faulkner’s struggle with the deluded concept of property ownership that led to slavery, “a tragic wrong stemming from the worst kind of hubris—as if you could hold title to a piece of the earth’s surface any more than to the body of another human being” (174). The struggle for Faulkner, Matthews suggests, is that he, too, is a member of the landed gentry. Quentin Compson struggles to come to terms with what it means to be from the South as he starts college at Harvard and is often urged to tell tales about “what the South is like” (188). Faulkner like Quentin Compson had to step away from his “little postage stamp of native soil” in order to get the worldview of the South. But there was always a certain nobility and sense of honor about those who were members of the old order that Matthews does not seem to appreciate in his book. Faulkner struggled with the guilt and sins of the past, but he always seems to appreciate the sense of fairness and honor on which they relied so heavily. Even Horace Benbow believes he will get Lee Goodwin off in Sanctuary because Goodwin was so obviously innocent, but as he watches the brutal lynching of his client, he loses his belief in even justice. Matthews has a starkly different critical view of Faulkner’s South than the prominent critic Cleanth Brooks who was a Southerner himself. Brooks often had a hard time reconciling with Faulkner’s critical depictions while Matthews often takes them in harsher terms than Faulkner himself using terms like the “interminable embarrassment of Southern racism” (226), a huge issue in novels like Intruder in the Dust but left to the notice of the reader instead of the judgment of the critic. But perhaps it is necessary not to be a Southerner to understand the South that Faulkner portrays so vividly in the same way that Quentin Compson, too, had to step away to understand it all.

In his last chapter “Seeing a South Beyond Yoknapatawpha”, Matthews discusses Faulkner’s later works in the time of immense world change like the end of World War II. This part is a great conclusion to the themes explored in the previous chapters. Racism rooted in the plantation South that allowed slavery to exist still is prevalent even as it is denied in Intruder in the Dust. Gavin Stevens takes great pride in defending Lucas Beauchamp of murder because he is a free man, but Steven keeps calling Beauchamp “Sambo” which is a derisive term derived from a now-banned book Little Black Sambo and subsequent ministerial shows. In this time after WWII, Matthews asserts “the traditional privilege of whites to imagine blacks as they chose” is a product of the past (231). But the whites in Intruder in the Dust determine Beauchamp was “a prideful negro, one who needs taking down a peg” (232). Matthew argues that works like Requiem for a Nun show how “privileged Southerners refuse to confront their own complicity in unspeakable practices” (247).

Seeing Through the South by John T. Matthews is a thoroughly researched, detailed discussion of all of William Faulkner’s novels and many of his short stories and the large themes reflected in them. Some references to Faulkner’s life are mentioned in this work, but only as the events relate to his writing. Matthews is an excellent writer, somewhat reminiscent of Faulkner himself with his eloquent long sentence structures, but this critical work is written clearly enough for students of all ages to understand, but detailed and researched enough for seasoned Faulkner scholars to benefit from as well.