The Western Flyer: Steinbeck’s Boat, the Sea of Cortez, and the Saga of the Pacific Fisheries 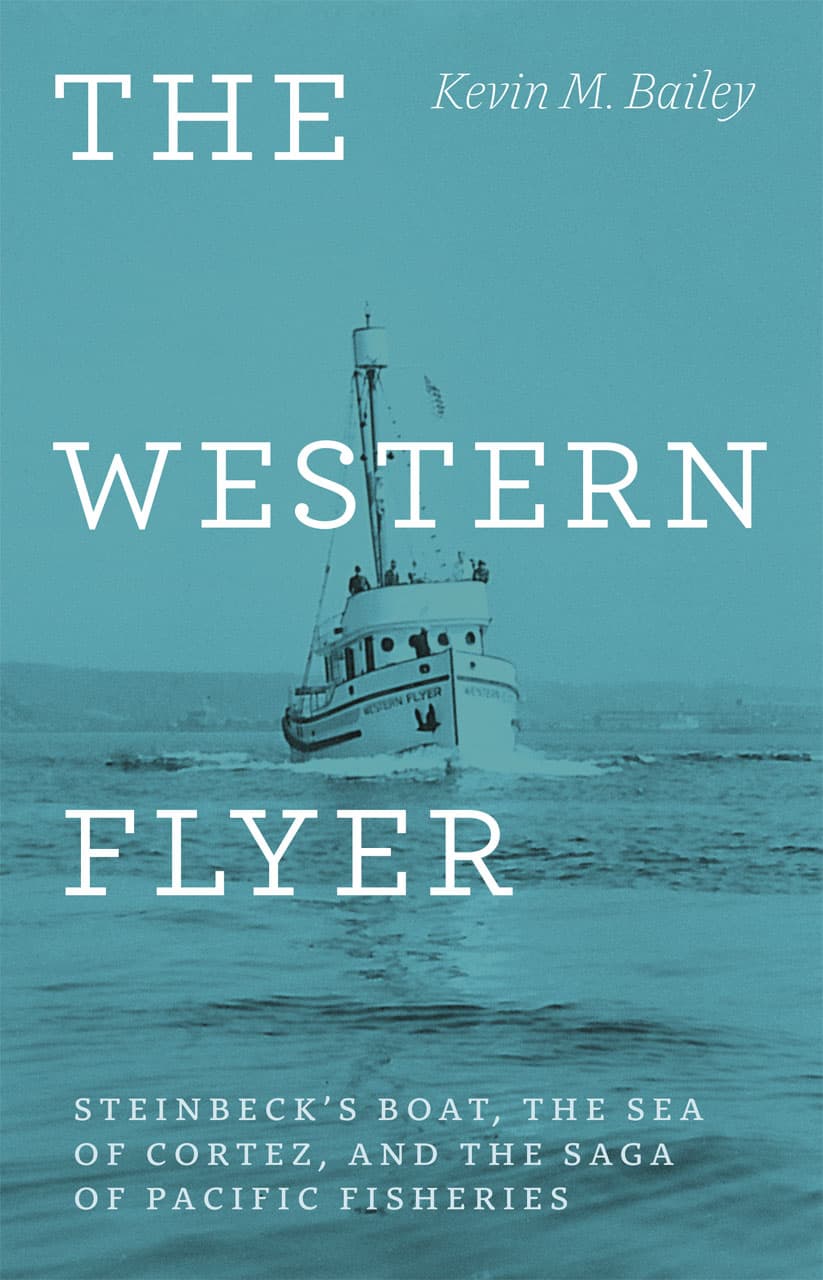 The Western Flyer: Steinbeck’s Boat, the Sea of Cortez, and the Saga of the Pacific Fisheries

Readers of John Steinbeck’s The Log of the Sea of Cortez will certainly recognize the Western Flyer as the boat that Steinbeck and his friend, the marine biologist Ed Ricketts, hired in 1940 to take them to the Sea of Cortez (the body of water that divides mainland Mexico from the Baja peninsula) on an exploratory and collecting expedition. In this book, Kevin M. Bailey traces the history of that notable boat from its construction in a Tacoma, Washington, shipyard to its current status in dry dock as it awaits a complete overhaul. As the subtitle suggests, Steinbeck and Ricketts’s six-week adventure dominates the early part of the book (and is certainly its selling point), but the author, a Pacific Fisheries scientist and a founding director of the Man & Sea Institute, also discusses the plight of the Pacific fisheries. He easily segues from one to the other while recounting the Western Flyer’s story as a fishing boat and purse seiner, which, under various owners, captains, and crews, took part in different fisheries up and down the West Coast and as far north as Alaska.

The narrative has turns that are anecdotal, gossipy, speculative, and analytical. After striking an elegiac tone in the prologue describing the Western Flyer’s fate in retirement in Alaska, Bailey talks about the ship’s construction, including a brief profile of Martin Petrich Sr., the boatyard owner. The description of the ship’s dimensions and an accompanying diagram follow, as do profiles of the captain and crew when Steinbeck and Ricketts hired the Flyer. At that time, the Western Flyer was part of the sardine fishery, sailing out of Monterrey, California. Bailey enlivens this account with anecdotes and background information about Captain Tony Berry and crewmen Tex Travis, Tiny Coletto, and Sparky Enea. Steinbeck, of course, needs no introduction, but Bailey recognizes the book would be paltry without some background information on the Nobel Prize winner, and more than once he mentions that the author was an unpopular man in and around his native Salinas after the publication of The Grapes of Wrath. He also mentions that at the time of the six-week cruise Steinbeck’s marriage was all but over, yet his wife, Carol, chose to come aboard the Flyer for the entire journey. Steinbeck aside, Ricketts was the most interesting figure of the bunch. A marine biologist, a philosopher, and an early deep ecologist, he ran Pacific Biological Laboratories and was the inspiration for the character of “Doc” in Steinbeck’s novel, Cannery Row. (In this section Bailey also inserts another noteworthy figure into his narrative, the mythologist Joseph Campbell, who knew both Steinbeck and Ricketts.)

When Ricketts and Steinbeck had collected enough specimens in the shallows of the Sea of Cortez, the Western Flyer turned back toward Monterrey, where the ship and its crew returned to the sardine fishery. Unfortunately, by the late 1940s, the sardine boom had collapsed. Here Bailey presents a short, insightful analysis of the fishery’s demise, offering Ricketts’s explanation as well as other scientific views, some of which coincide with Ricketts’ and others don’t. As for Tony Berry and his crew, they decided to switch to tuna fishing. However, the Western Flyer was too small and slow for tuna fishing, so Berry sold it back to Martin Petrich who, in turn, sold it to Armstrong Fisheries of Ketchikan, Alaska.

For a year or so, the Flyer was part of the herring fishery in Alaska, but in 1952, the boat was sold to Dan Luketa, a fisherman from Seattle. Bailey draws an interesting profile of Luketa, including his sad final years. The enterprising Luketa eventually worked himself up to a small fleet of fishing boats, which, along with the Western Flyer—now transformed into a trawler—worked the Pacific Ocean perch fishery (also known as red rockfish.)  Eventually, the perch fishery in the waters off the northwest coast suffered the same fate as the sardine fishery further south, only this time, the reasons were more complicated, both ecologically and politically, as industrial fishing had taken its toll—especially from Soviet and Japanese fishing fleets. Bailey’s explanation of this is detailed, including a graph showing the decline of the fishery.

When the Pacific Ocean perch could no longer be fished, Luketa took the Flyer further north to Alaska to get in on the boom for red king crabs. But as with sardines and perch, the crabs too became depleted, and Luketa sold the boat, renamed Gemini, in 1970. By the mid-1980s, the Gemini was merely a salmon tender, no longer used for fishing but only as the ship to which the fishing boats transferred their catches to be taken to the cannery. As Bailey describes it, “A fish tender is little more than a self-powered barge” (p. 93) and this would seem an ignominious end for one of the best-known boats in American literature.

In fact, the Western Flyer/Gemini was to suffer a worse fate. Disuse, as well as lack of upkeep and maintenance, were responsible for the boat sinking while it was tied up at an Alaskan dock. It was subsequently raised and is expected to be refurbished at an enormous cost. Its likely ultimate destination as of the time of Bailey’s writing is Salinas (instead of Monterey), where it will serve as a beached tourist attraction. Bailey bemoans this plan—his preference is that old fishing boats, even one as well known as the Western Flyer, ought to meet their natural fates—but seems at least partially accommodated to it: “In my own dreams the Western Flyer is a skeleton perched in the hills overlooking the [Salinas] valley, her whale ribs bleaching in the sun” (p. 113). And, really, there are worse fates the inexpungible Western Flyer could have suffered.