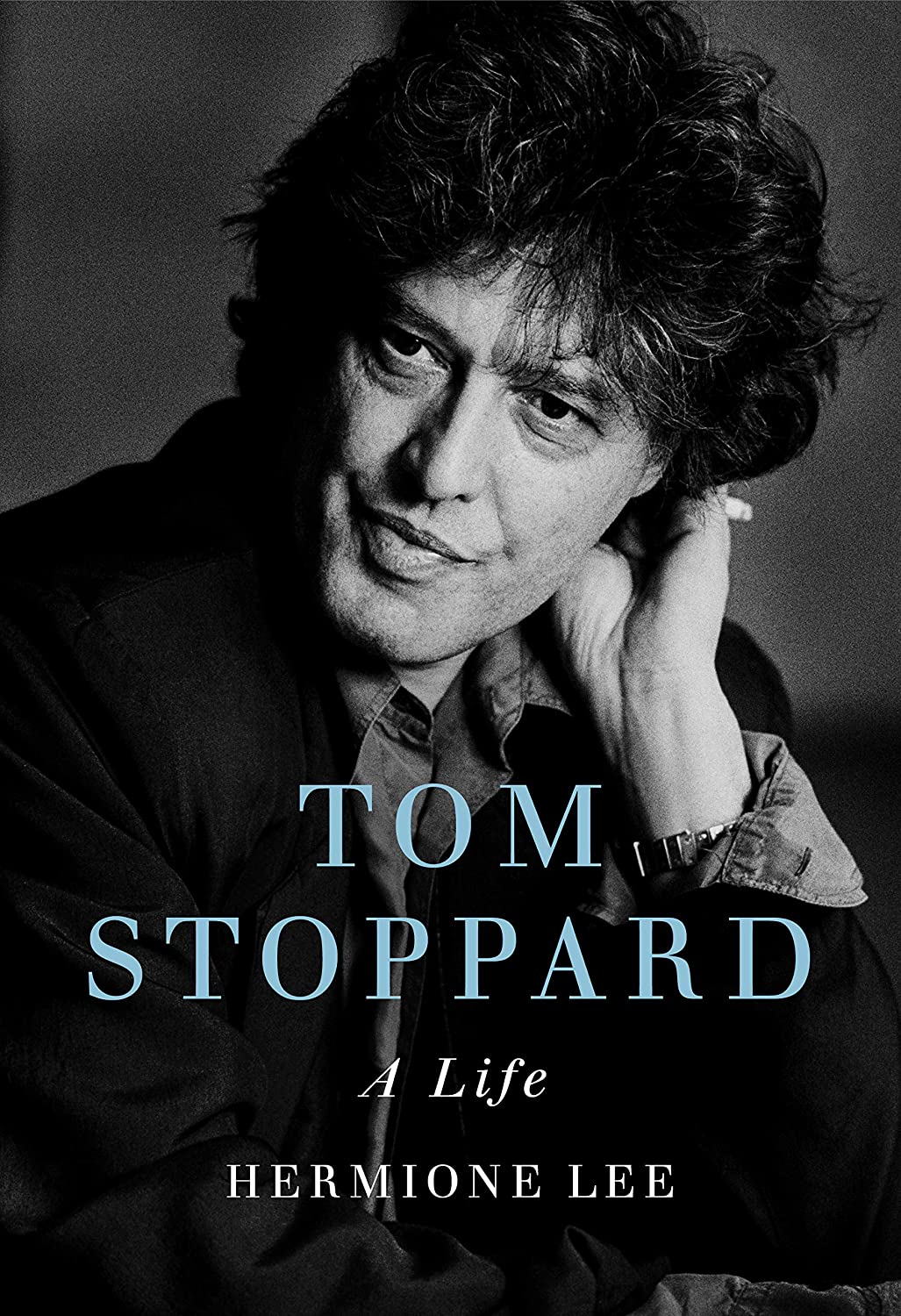 Hermione Lee, an award-winning biographer, best known for her biographies of Virginia Woolf, Edith Wharton, and Penelope Fitzgerald, hazards this time a biography of a living figure, a protean playwright with a penchant for denigrating biography. Like Tom Stoppard’s previous biographer, Ira Bruce Nadel, Lee explains that in Stoppard’s view imaginative literature comes closer to the truth of a life than a biography ever can because biographers deal with scraps of evidence, surmises, and details dredged up that can never get to the essence of human character. Stoppard met with Nadel once and seems to have let the biographer alone—even claiming never to have read the result. So why did Stoppard ask Lee to do the job? She never says, really. She makes the reviewer do all the work, reading between the lines as in an elusive Stoppard play like Rosencrantz and Guildenstern Are Dead (1966) in which the characters are not sure why they are there or what their lives mean but go on at length trying to parse existence, anyway.

By the end of Lee’s long biography, when Stoppard is in his eighties, it finally became clear to me why he came calling on a biographer. In plays like Indian Ink (1995), The Coast of Utopia (2002), Rock ‘n’ Roll (2006), The Hard Problem (2015), and Leopoldstat (2020), he gets ever nearer to autobiography, drawing on his family’s traumatic departure from Nazi-occupied Czechoslovakia where he was born Tomáš Straussler, his earliest years in India, and his reckoning with a Jewish heritage his mother kept from him and that he, for the longest time, did not want to explore, choosing, instead, the life of a charming Englishman gentleman playwright, beloved by nearly everyone, it seems. Lee does not say so, but given the ways she describes these plays and others, Stoppard may have realized he hid from himself in important ways and that he had a weak command of his family history, preferring to be a mama’s boy and defer to her adamant refusal to discuss the past. Putting it that way is a little crude, and a little rude, which is what Hermione Lee, Dame Commander of the British Empire, would not deign to do. She never abandons good form and never really presses Stoppard, who, she confesses, grows evasive over certain intimate matters like the breakup of his second marriage and his affairs with actresses. It’s not that we do not learn a good deal about all this—just that we always get to the point where we can sense Stoppard’s door closing on his biographer.

Like characters in a Stoppard play, he had to go searching for what was never said in his immediate family, or what his stepfather, who stepped in after Stoppard’s father died in Singapore during the war, wanted said. Ken Stoppard made clear to his son he wanted no truck with Jews—or Czechs, for that matter, who came calling at the family home. And Tom, eager to embrace all things British, including a cricket bat, did not explore his Jewish Eastern European roots until the late 1970s in plays like Squaring the Circle. When he traveled to Communist regimes and talked with playwrights, especially Vaclav Havel, he began to think about the Iron Curtain world he might have grown up in—so different from the freedom of speech he has cherished and celebrated in plays like Travesties (1974), set in Zurich and featuring wonderful send-ups of Joyce and Lenin and the Dadaist Tristan Tzara, as reflected in the wayward memory of Henry Carr, an English consular official.

Stoppard’s masterpiece, Arcadia (1993), oscillates between early 19th century Derbyshire and the present day of the play, questioning the evidence on which characters base their perceptions. Out of this work seems to have emerged Stoppard’s belated concern with his own past, accelerated when his mother died in 1996. How much of the past had he had denied himself? Did he begin to wonder what a biographer might make of him in important ways that he could not make of himself? If this thought occurred to Stoppard, he does not say so, and I wonder if Lee was too polite to ask? Many of Stoppard’s plays—for all his skepticism of biography—are biographical. His prodigious research is akin to a biographer’s, although he does not limit himself to facts and has no compunctions about deviating from the historical record.

If much is withheld in this biography, it is still a pleasure to learn so much about this dynamo—like Eugene O’Neill, not afraid to write a nine-hour play, like Shakespeare an unapologetic lifter of other writers’ work in inspired adaptations of Arthur Schnitzler, Ferenc Molnár, Havel, Anton Chekhov, and others, and what amounts to almost a ventriloquist’s mastery of other writer’s styles—like those of Oscar Wilde and Bernard Shaw. Again and again, Lee takes us into the rehearsal hall as Stoppard sees his plays come to life—sometimes rewriting lines because of actor’s questions or comments, and at other times remaining silent because, like Harold Pinter, he denied he had any privileged knowledge of his characters’ motivations. For Stoppard, playwriting is a fluid form and no text of his is definitive—even after it has been published. So check how many editions you have of the same play because they will all be different.

Lee does not stint in covering Stoppard’s radio and television work, especially the playwright’s adaptation of Ford Madox Ford’s series of novels, Parade’s End, triumphant work on Shakespeare in Love (the film and the play), and many uncredited contributions to Stephen Spielberg movies. The playwright has taken on many projects to support his lavish expenditures on travel, holidays, huge public parties, and luxury residences, which Lee describes in the detail we are accustomed to reading about in travel and real estate brochures.

The biographer engages in some character analysis. Here she is on Stoppard’s vaunted charm, which can seem “glib, superficial, manipulative.” Certain critics have made similar comments about his plays, and Lee quotes them. But charm can also mean “kindness, intelligence, humor, physical charisma—as well as glamour.” Many women have been charmed—seduced might be a better word by this handsome, dapper man.

So has Tom Stoppard seduced Hermione Lee? Not exactly. Toward the end of the biography, she explains that she knows quite well that his friends are careful because Stoppard will read what they say. They “want to praise him,” she reports. “When he does read this book,” she reveals, “he repeats to me something he has often said before: he is good at performing niceness, but he is not as nice as people think.” But what does that mean? All Lee has to offer is the comment of a young playwright (otherwise not identified) that Stoppard can be “a tiny bit evil.” A theater director says Stoppard uses his charm to get his way. But that’s about it so far as the “dark side” goes.

Is Lee or Stoppard hiding something? Well, again, not exactly. He does seem a nice chap, an engaged and generous father, on good terms with ex’s, with plenty of lifelong friends, and a sincere public benefactor. Stoppard has been criticized as a Tory playwright. He did vote for Thatcher, but he also voted for Tony Blair. And although Lee does not put it this way, it would be monstrous to reduce Tom Stoppard to some set of political positions. His wonderful plays are dialectical, and his characters often indulge in ideas he has rejected when he is outside the theater.

Perhaps Stoppard gave Lee the go-ahead because he knew, as she admits herself, she does not have the last word. She mentions a public occasion when she was present for one of his talks. He turned to the audience and said: “You know the writer who said, ‘Biography adds a new terror to death.’ Well, here she is!’” The playwright knows that after he and Lee have gone their ways, other biographers will arrive—just like the characters in his plays to have another go at history.