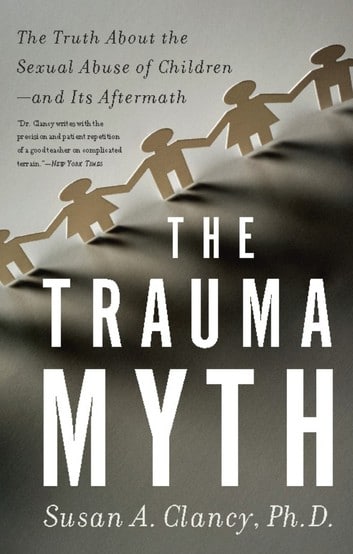 Susan A. Clancy holds a Ph.D. in Experimental Psychology from Harvard University. An expert in the field of cognitive psychology, she’s no amateur when it comes to controversial topics. In her first book, Abducted: How People Come to Believe They Were Kidnapped (2005), Clancy took on the hot-bottom issue of outer-space alien abductees and their memories. This time around, in The Trauma Myth, she has chosen to tackle childhood sexual abuse. While on the face of it there’s nothing risky about the topic, it’s her approach that pushes the envelope. Based on interviews conducted at Harvard over a 10-year period with over 200 men and women of varying ages and occupations, all of whom were sexually abused as children, the book is part personal narrative accounts from victims and part Clancy’s own theories on sexual abuse trauma.

In some ways, The Trauma Myth is a misnomer. Clancy is not arguing that childhood sexual abuse is not traumatic. From the outset, she makes it quite clear that her goal is to argue for a reconsideration of the definition of trauma. This book asks readers to question what they know—or, more aptly, what they thought they knew—about sexual abuse and the resulting trauma experienced by children. As she writes in the book’s introduction, “sexual abuse is very rarely described without the word ‘trauma’ …. As a consequence many researchers studying the impact of sexual abuse do not even bother to ask victims detailed questions as to whether the experience was traumatic when it happened; they just assume it was.”

In chapter one, Clancy uses personal accounts from multiple victims to explore what the abuse was like when it happened. Because each victim reported that the abuse was not traumatic, terrifying or life-threatening, she questions what she thought she knew about trauma. In chapter two, the author provides a thorough reading of psychology literature, explaining several key developments in the field of sexual abuse, most prominently Karl Abraham’s 1907 hypothesis that sexual abuse victims fell into two separate categories—“accidental victims” (violent abuse conducted by a stranger) and “participant victims” (non-violent abuse at the hands of a known person). In chapter three, she proceeds to deconstruct how the trauma model for counseling sexual abuse victims emerged. As Clancy explains, Sigmund Freud in his 1896 publication, “The Aetiology of Hysteria” proposed that sexual abuse caused neurosis, but a year later he changed his mind, concluding that his patients had made up their abuse claims. Subsequently, Freud’s revised theory became widely accepted in the field, prejudicing many professionals who began to believe that victims lied about their sexual abuse. As Clancy asserts, “between 1930 and 1970, the literature was rife with case studies of ‘seductive children’ or ‘pathologically needy’ children.” In the 1960s and 1970s, however, the author explains how professional assumptions about child sexual abuse changed, in large part due to the work of child-protection advocates and feminists such as Judith Herman and Susan Brownmiller, who pushed for the end of victim-blaming. By the 1980s and 1990s, sexual abuse was framed as a traumatic event and conceptualized as a form of post-traumatic stress disorder, in large part to protect victims and reclaim the validity of their abuse. In chapters four and five, Clancy sets out to answer the two questions underpinning the book: why does the trauma myth damage victims? And, how does the trauma myth silence victims?

Clancy has an exceptional ability to simplify clinical language, allowing the reader to understand how psychology professionals came to their conclusions and the numerous studies that have been conducted in the area of childhood sexual abuse. That said, some of the accounts from victims are shocking, at times difficult to read, and very tragic. These stories, support Clancy’s arguments that trauma, as it has been conceptualized for the past 30 years, is not always directly related to the actual abusive events; rather, more often trauma is a complex web of emotions and feelings that take years to come to the surface.

While the first few chapters of the book are heavy with multiple page accounts from victims, the latter chapters contain short quotes that are not as effective. Further, there are many instances where Clancy becomes a bit repetitive with her arguments about trauma. The Trauma Myth is ultimately a fascinating exploration of the topic of childhood abuse. It certainly raises more questions than it answers, but in the end, the author’s intent is not to provide answers but to challenge how we, and professionals in the field, think about childhood sexual abuse. To that end, the author is successful.