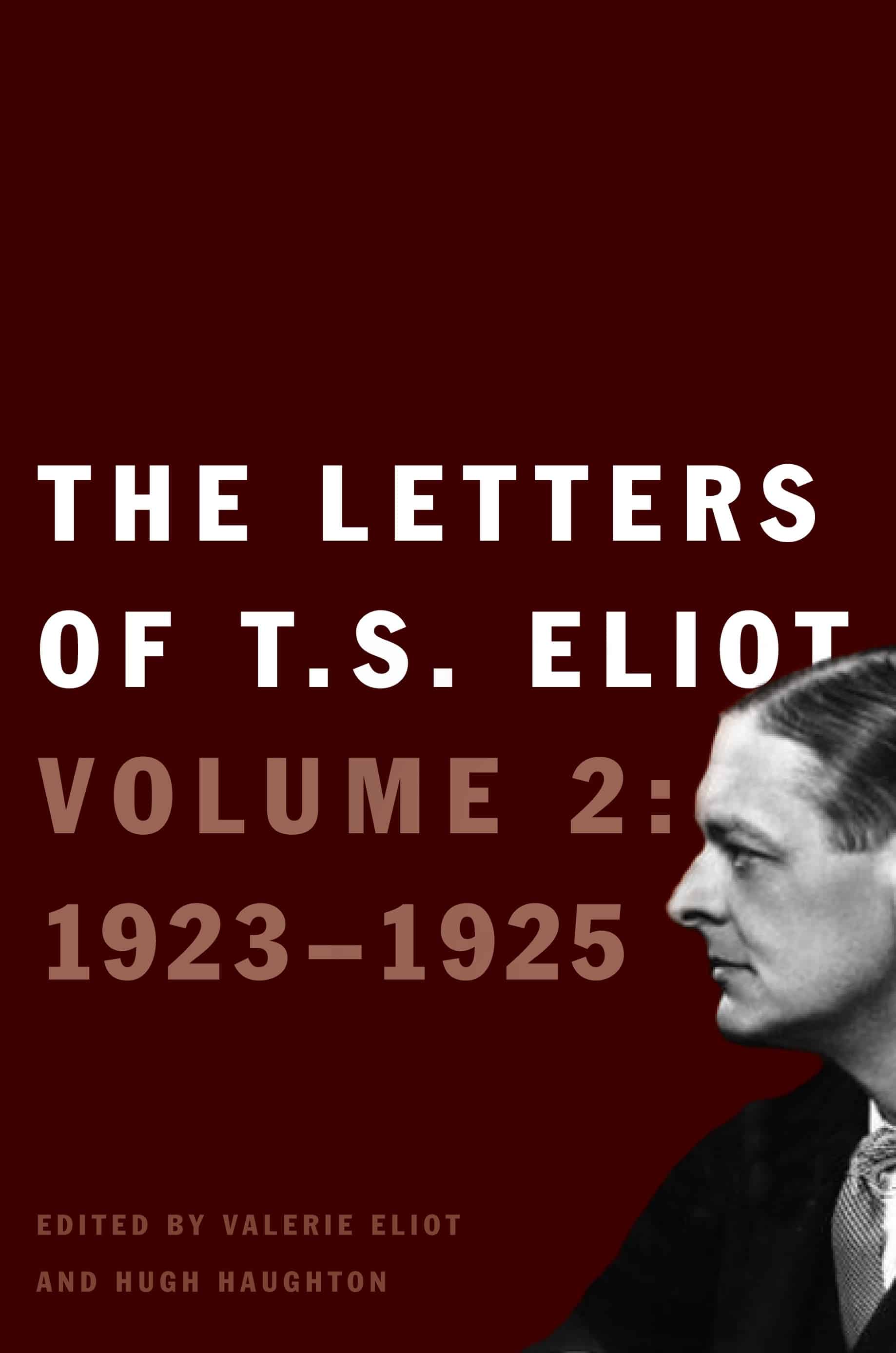 Reading the private correspondence of a famous person can be reassuring (“I just knew she was like that in her real life!”), upsetting (“How awful he was!), even disorienting (“I never imagined anything like this.”) Reading T. S. Eliot’s letters—or at least those written between 1923-1925—could well stimulate a different emotion, one somewhat at odds with the poet’s famously aristocratic bearing: sympathy.

The Letters of T. S. Eliot, Vol. 2: 1923-1925 finds the author of such modernist masterpieces as “The Love Song of J. Alfred Prufrock” and “The Waste Land” regularly lamenting the current conditions of his life. Sometimes these lamentations are playful, sometimes hyperbolic, sometimes genuinely pathetic. But it’s impossible to doubt their sincerity. It’s somewhat discomfiting to find a writer of Eliot’s literary eminence disparaging both his past and future output:

“I am so jaded, with the anxiety of the past year, that I simply cannot write decent prose: my last articles in the Dialare deplorable; and until I can get my mind into better shape I should simply ruin my reputation by writing at all.”

Even unquestioned masterpieces like “The Waste Land” seemed to provide the poet more agita than adulation. Writing to the eminent critic Edmund Wilson, Eliot confessed that “I am very sensible of its fundamental weaknesses, and whatever I do next will be, at least, very different.” About his essay collection, The Sacred Wood, he admits to another correspondent that “[T]here are many statements in it which I no longer believe.” To an editor seeking a contribution, Eliot admits “I have nothing which I could offer you, or anyone else, on which I could even light my pipe with.”

What brought the undisputed heavyweight champion of Modernist poetry to such a grievous state, one he called “the prison-like limitation of my time”?

Would you believe love?

Actually, two loves, the two great loves of his life in the early 1920s: his first wife, Vivienne Haigh-Wood, and the second, even more all-consuming love: the literary journal he founded in 1922, The Criterion. He pledged his troth to the former, but it was to the latter he gave his mind and body.

Married to the governess-turned-writer Haigh-Wood in 1915, by 1923 the marriage began showing signs of strain. Her poor physical health (including tuberculosis as a child), as well as migraines, frequent bouts of depression, and the then-common medical diagnosis of “hysteria” took their toll on both marriage partners. But Eliot was fighting his own battles against dissolution as well: “The work of the Criterion has been steadily increasing week by week to such a point that I have steadily come nearer to exhaustion.”

Eliot’s devotion to the influential literary quarterly—for which he served as editor, business manager, secretary, and contributor—is admirable, especially when one realizes he simultaneously maintained a full-time job at Lloyd’s Bank in London, where he headed the “Intelligence Department.” The daytime job paid most of the bills, including Vivienne’s medical bills, but it sapped his strength and kept him from being able to focus on his own work. Yet somehow he managed to continue his one-man-band act, editing The Criterion late at night, on weekends, and during bank holidays. As he noted in one letter, “There are only two things I really want to do—The Criterion and my own writing.”

Readers of The Letters of T. S. Eliot, Volume 2: 1923-1925, edited by Valerie Eliot (the poet’s second wife, and widow) and Hugh Haughton (Professor of English at the University of York) might be left to wonder how the distraught and over-worked Eliot was able to produce such voluminous personal correspondence during these troubled years. There are more than 700 pages of letters from these two years alone. Questions of industry aside, Vol. 2 is a superbly presented collection containing a comprehensive timeline of events in the poet’s life (“Biographical Commentary, 1923-25”), as well as thorough and helpful footnotes to the letters’ historical and personal references, and—unlike most collections of Eliot’s published work—complete translations of the poet’s French (Eliot was fluent).

Posterity provides some balm for the reader of these letters. Although Eliot’s life would remain troubled through the rest of the decade (he and his wife would separate in a few years), his fortunes were about to change for the better—a turn-around glimpsed at the end of this collection as he is offered the position of editorial director of a new publishing company in London, Faber and Gwyer. As the collection concludes, Eliot is preparing to move from a life in banking that yielded little interest to the more personally lucrative prospect of full-time man of letters. “Ash Wednesday,” the magisterial “Four Quartets,” and his acclaimed verse drama Murder in the Cathedral, among other now-classic prose and poetic works, beckoned. Good thing—the banker/poet of Vol. 2 is a broken man: “I am worn out. I cannot go on.” What drove him on can be found in subsequent editions of Eliot’s letters—or perhaps in the disarming and sublime clarity of the last line of 1940s “East Coker,” one of the poems that comprise The Four Quartets: “In my end is my beginning.”

James Broderick is Professor of English at New Jersey City University and the author of eight books, including Now a Terrifying Motion Picture!: Twenty-Five Classic Works of Horror Adapted from Book to Film. He lives in Glen Ridge, New Jersey.