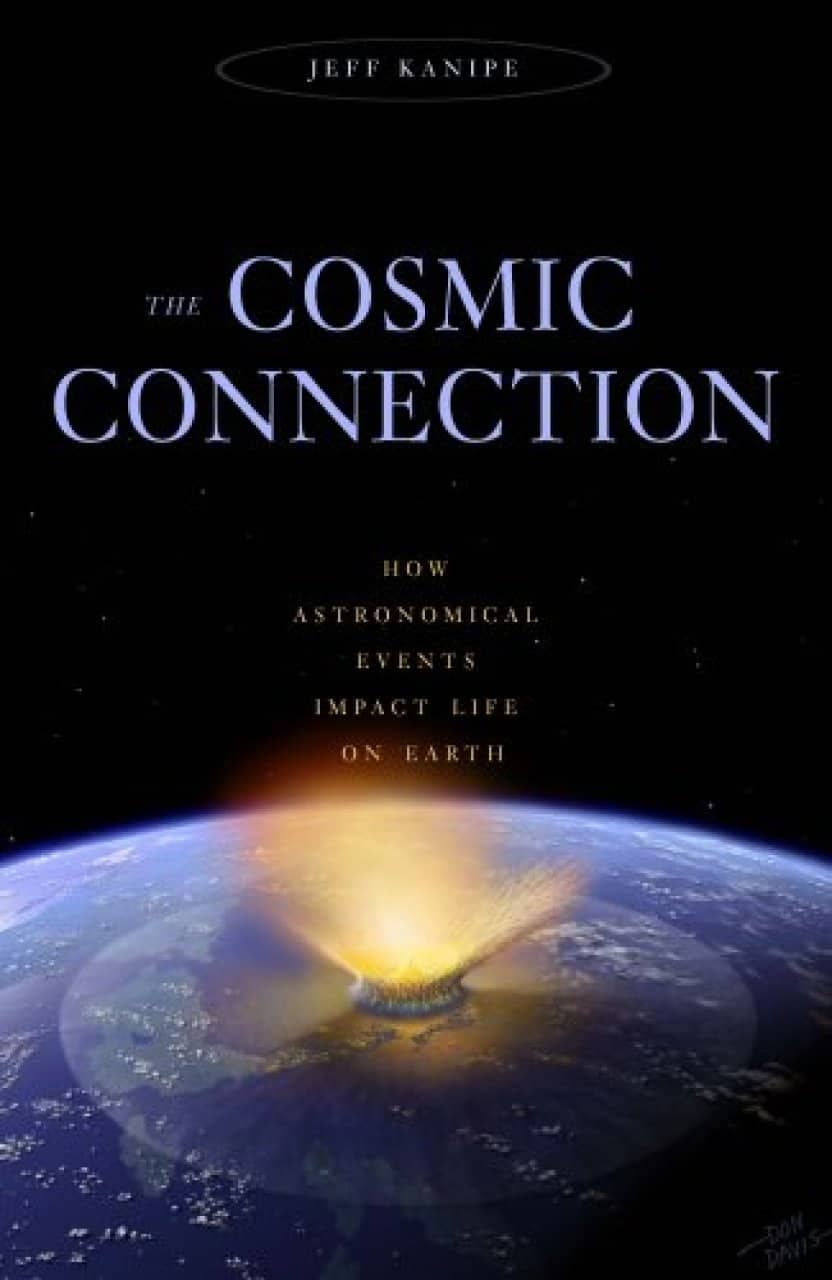 In The Cosmic Connection, Jeff Kanipe tackles the Earth’s place in the universe, and how other denizens and aspects of the cosmos have contributed to the development of life here. Yet, they may also have led to mass extinctions in the past and may yet again in the future. The cosmos giveth and the cosmos taketh away, it seems.

Readers may already be familiar with the fact that our bodies (not to mention our planet) are made of elements forged in the long-ago deaths of stars (an insight described years ago by Carl Sagan in a book that, ironically, has the same title as this one). In fact, this connection has become known well enough that Kanipe, a science writer and author of several astronomy books, merely mentions it in passing on his way to describing other ways that the universe has affected life in the past and will again someday.

When that “someday” will depend, of course, on highly theoretical extrapolations of what has happened, or may have happened, in the past. For instance, Kanipe describes various factors that may have triggered the cyclical ice ages of history. These include changes in Earth’s orbit (it’s not always as close to circular as it is now) and the inclination of its axis (it wobbles). Other contributors to climate change range from the familiar asteroid and comet collisions, to the changes in the sun’s energy output related to sunspot activity, to the nebulous effect of the sun’s pathway in and out of the spiral arms of the Milky Way.

But the only scenario that appears to represent a not-too-distant threat of annihilation is that of a collision. We all know that’s what wiped out the dinosaurs. And the evidence is good that collisions were responsible for other, bigger mass extinctions in the geologic past.

The question is, given the timescales between collisions and what we know and don’t know about the number of potential Earth-intersecting asteroids and comets, do we need to worry about one striking tomorrow? And if we do detect it heading our way, do we have enough time, and ability, to do anything about it?

Kanipe addresses these questions, but he spends a lot more time writing about the subtle effect of the solar system’s position in relation to other stars in the Milky Way, and how that affects the production of cosmic rays. More cosmic rays will, in turn, produce more genetic mutations here on Earth. There’s even a theory as to how more exposure to the interstellar medium could, again, trigger an ice age.

But the impact of these galaxy-scale events won’t be felt for eons to come, ranging from hundreds of thousands to hundreds of millions of years from now. So how concerned we should be depends on how much emotional attachment we feel to the generations so far down the road. And that’s if humanity is still around and hasn’t been wiped out by something else by then. In any case, we have a five-billion-year deadline to leave the solar system; that’s when the sun dies and turns our planet into a ball of ash. Uh-oh.

Besides the effect all these cosmological factors have on life on Earth, Kanipe interestingly relates it to the search for extra-terrestrial intelligence. After all, knowing how unlikely it was for our species to have advanced to this stage may give us a clue about how common sentient life is elsewhere. But there’s still a lot we don’t know, and despite advances in technology, we may not know whether we are alone in the universe for decades to come. (In fact, even if we are alone, we may never know that for certain. After all, there will always be more places to look.)

The how-unlikely-life-is discussion also touches on the number of happy coincidences that have allowed for our existence, and how some theologians have commandeered this fact to argue that it was all fine-tuned by an intelligent designer. Kanipe wisely points out that the same universe that gave us these parameters that seem just right for life, also gives us the various hazards discussed above. The point is, it all could have turned out differently, but then we wouldn’t be here to think about it.

While the author is careful with his caveats about what is still unknown about the universe, the reader may be amazed at how much we do know: How, within the relatively short span of our civilization, we’ve figured out the position of the solar system in the Milky Way; its speed within it and the rest of the universe; the existence and even the sizes of extrasolar planets; even the position and nature of wisps of interstellar gas.

Rather than worry about the effect of all these things on our lives, it’s more satisfying to wonder what else we may discover in the time we have left.