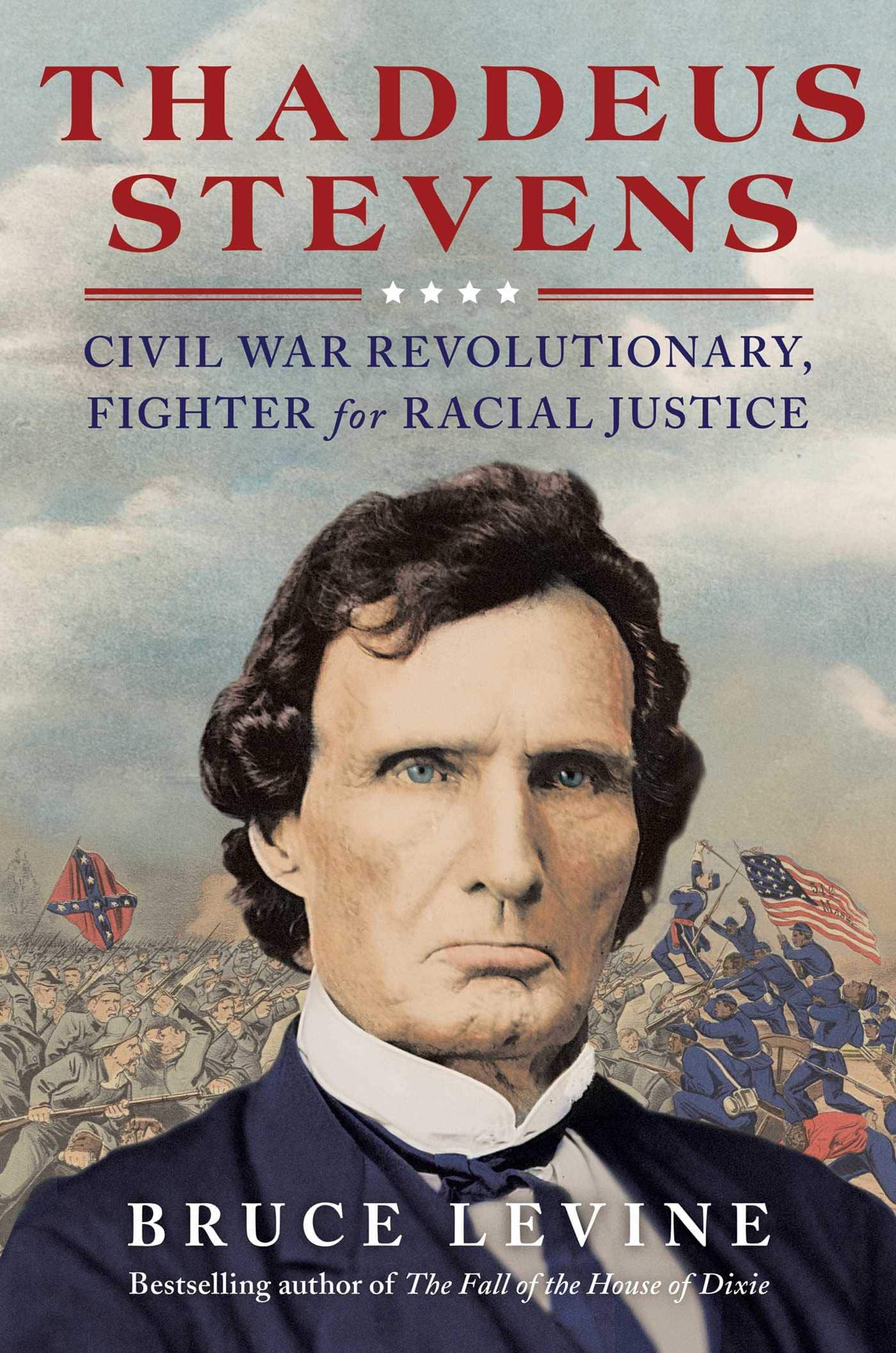 Bruce Levine, a professor emeritus of history at the University of Illinois and an award-winning author of books on the Civil War, quotes French statesman Georges Clemenceau observing Thaddeus Stevens (1792-1868) nearing the end of his life, with his illness “progressing rapidly but his energies mounting still faster. Once in a while a sardonic smile, like a grimace, flickers over his livid face. If it were not for the fire smoldering in the depths of his piercing eyes, one might imagine life had already fled from that inert body, but it still nurses all the wrath of a Robespierre.” This is the indelible image of the Radical Republican congressman bequeathed to history, not merely to reform the post–Civil War South but also to rebuild it from the ground up with federal troops and legions of ex-slaves owning the land their former masters had shaped into a profitable plantation business.

Levine does not lead with that comparison of Robespierre and Stevens, placing Clemenceau’s observation near the end of the book because Stevens was not born a Radical—at least not exactly. Although representing Pennsylvania, Stevens grew up in Vermont, far ahead of most states in its own understanding of democratic rights. Starting in politics as a Whig, Stevens’s early views were moderate and even nativist, insisting on property rights to qualify for the vote, for example. As the Whig party broke up, Stevens realized what full democratic rights meant. He radicalized himself, arguing, for example, that children, regardless of class or race, deserved the same access to public education and not to regulate the poorest people to pauper schools.

After coming to Congress as a member of the newly established Republican Party, he began to pressure his colleagues in the years leading up to the Civil War to give no quarter to the South. While many Congressmen hailed the Compromise of 1850, which they believed prevented a civil war, Stevens predicted such compromises would hasten an inevitable reckoning with the slave power of states like South Carolina that threatened secession.

Levine points out that Stevens did not launch his fiery declarations from a safe congressional seat. Northern voters were not concerned with the rights of African Americans. Some constituents were hostile to the notion that individuals would treat an inferior race on a par with white people. Stevens was consistently ahead of public opinion, confident that he could return home to Pennsylvania and persuade his constituents that he was right, and they continued to elect him.

Stevens supported Lincoln while pushing the president to adopt more radical policies. Lincoln worried about losing the support of the slaveholding border states and had to be drawn reluctantly into offering an Emancipation Declaration that Stevens wanted right away to take advantage of slaves defecting from their masters. Lincoln eventually adopted Stevens’s bold approach, and in the end, the North depended on something like 200,000 African American troops to crush the rebellion.

Levine shows that Stevens could compromise when he regarded it as essential to his long-term goals. He preferred they establish the Fourteenth Amendment, outright, the enfranchisement of Southern black men, but he acknowledged the strength of Northern racist opinion. The founding fathers, he recognized, “had been compelled to postpone the principles of their great Declaration [of Independence] and wait for their full establishment till a more propitious time.” So, he supported in 1866 the Fourteenth Amendment, which, in Levine’s words, provided that a “state’s House delegation be reduced only in proportion to the number of adult male citizens specifically barred from the polls.” Levine concludes: “He here offered a textbook lesson how to accept a necessary compromise without abandoning or concealing one’s own political position and preferences.”

Stevens often appears in popular accounts as a fanatic—not the right word for a man who used his intemperate moments to goad opponents while drawing defenders to his side. Levine describes riveting scenes that reveal Stevens’s civil and physical courage. After John Brown’s failed raid on Harper’s Ferry, Stevens said in the House of Representatives that Brown “deserved to be hung for being a hopeless fool” because he attempted to “capture Virginia with seventeen men” when it would “require at least twenty-five.” This was not the first time that Stevens’s scornful humor provoked menacing congressmen, who, Levine reports,

leapt from their seats, rushing angrily into the space around his desk. Mississippi congressman William Barksdale brandished a Bowie knife. No one regarded such threats as idle. Just a few years earlier a South Carolina congressman had used a walking stick to bludgeon Massachusetts’s Charles Sumner into unconsciousness as he sat in his Senate desk. Stevens’s colleagues were not about to tolerate a repeat performance. Republicans including the body builder and amateur boxer Roscoe Conkling of New York moved quickly to defend the Pennsylvanian. Amid this tumult, however, Stevens maintained his accustomed calm demeanor, and when order had been restored he dismissed the episode as a “mere momentary breeze,” yet again confirming a colleague’s appraisal that this was above all “a brave man.”

Levine rushes past this episode. The point of Stevens’s rhetoric was to move men to his side, to show them, viscerally, what was at stake when they temporized with the thuggish slave powers. He wanted to demonstrate that not only was he unmoved by physical threats, but also that others would need to rouse themselves defending the just cause.

Abraham Lincoln’s assassination dashed Stevens’s plans for a revolutionary reconstruction. While many of his fellow Republicans supported the campaign for the newly freed, giving them equal rights, Republicans balked at the idea of confiscating plantations and redistributing the land to African Americans. The rights of property owners remained sacrosanct to these Radicals, even though the wealth of those planters derived from enslaved labor farms, as historian Ty Seidel calls the plantations in Robert E. Lee and Me: A Southerner’s Reckoning with the Myth of the Lost Cause.

Stevens soldiered on, opposing President Johnson’s effort to make the Reconstruction Era no more than a program to reconcile the South to the Union. Stevens did his best, even as he was dying, to call Johnson to account through impeachment and came close to removing him from office. Unlike many of his Radical Republicans, Stevens did not waver in support of African American rights. Even as Republican majorities waned in the North and wearied of enforcing the voting rights and security of African Americans terrorized by whites steadily regaining control of Southern governments, he held to his belief.

Stevens knew he was dying. It was like the man to look ahead and set an example. Levine ends his biography noting that Lancaster County, Pennsylvania had only one racially integrated cemetery, where Stevens chose to rest with a monument that read: “I repose in this quiet and secluded spot not from any natural preference for solitude. But, finding other cemeteries limited as to race, by charter rules, I have chosen this that I might illustrate in my death the principles which I advocated through a long life: EQUALITY OF MAN BEFORE HIS CREATOR.”