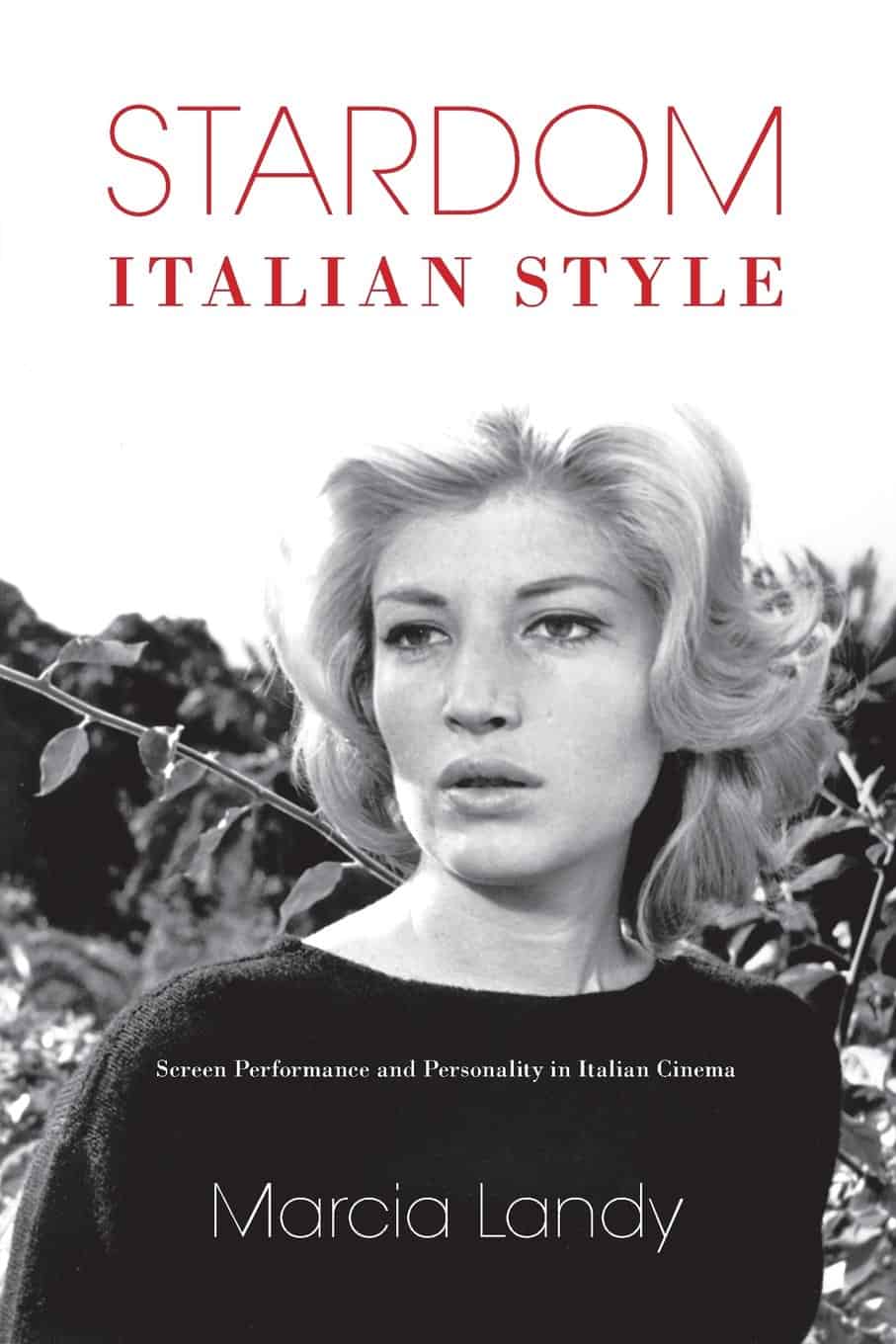 While Marcia Landy, author and Distinguished Professor of English/Film Studies, offers an erudite and meticulous examination of the phenomenon known as “stardom” in Italy, the title and subtitle (Stardom Italian Style: Screen Performance and Personality in Italian Cinema) are, ultimately, a bit misleading. This is especially true when taken in conjunction with the cover picture of the exquisite and sensual Monica Vitti. These would give indications that the material would attempt to dissect that which many feel is immeasurable: the je ne sais quoi, the X-factor, that intangible something that hurls certain actors, and not others, to the pinnacle of cinema success: Stardom.

But that wouldn’t be the truth of this work.

It is, instead, an examination of the film stars of the era covered in the book, primarily the twentieth century beginning with the silent film era to the later years of the period, within the context of the political events and their influences on each time span on film and stardom. Once beyond the misleading cover, it is clear from the onset what the intention of the book is, when, on page 4, a section is entitled, “The Making of a Political Divo: Mussolini in the 1920s.” In her introduction, Landy states clearly, “I take a retrospective look at expressions of stardom in relation to changes in the Italian cultural and political milieu.” (p. xiii)

No less intriguing, Landy’s work is a compendium of the Italian stars throughout the age, all the while comparing and contrasting them to what is happening in the world, and the movers and shakers that are making it happen. The book is divided into distinct portions, focusing on what the author perceived as the major shifts in the cinematic culture.

The first, Eloquent Bodies: The Cinema of Divisimo, centers on the silent film era and the theory of divisimo, a theory that distinguishes “stardom” to being “unique.” Within this section, such influences on stardom as Gabriele D’Annunzio and Mussolini are taken into consideration when discussing the work of Bartolomeo Pagano (Cabiria), for example. On the feminine side are the “incarnations of the diva,” with such examples as Italia Almirante Manzini. Here Landy offers more definitive conclusions, “These feminine images of the silent screen were the creation of light and shadow, silhouetted images of the body, close-ups of the face, choreographed movements akin to dance and lyric opera, acting styles expressive of the world of dreams, and exotic and dreamlike landscapes indebted to the Symbolist poets and to the Surrealists.” (p. 15)

In the second section, The Stars Talk, Landy shows the effects of fascism and the beginnings of the influence of Hollywood on filmmaking. In this era, such notables include Vittorio de Seca, Assisa Norris, and Isa Miranda.

Neorealism, an Italian film movement drawing its characteristics from the lives of the poor and working class, is the focus of the third portion, Stars amidst the Ruins: The Old and The New, and cinema’s distinctive post-war personality. For many, this section will hold the true “stars” of the work, for in it is found the breath-taking Sophia Loren and Marcello Mastroianni. There are few who would debate the author’s contention that, “Loren and Mastroianni were able to translate their roles for audiences beyond Italy to become international stars.” (p. 120) But Landy seems to give little credence or credit to their amazing “charisma” for such success.

Popular Genres and Stars is the subject matter of the fourth section; a characterization found after the 1950s. Here Landy, rightly, brings in the harsh and forceful influences of economics on filmmaking and stardom. Budgets proved an excellent guiding factor, giving rise to “spaghetti” westerns for one example, and to the rise of “Ordinary People” stars for another.

In each section, the extensive descriptions of many films—descriptions that can last for pages and pages … and pages—while fascinating, does not always speak to the thesis of the book. In those instances where it does, the author effectively uses film content to support her contention. Though the subjects are Italian—one of the most naturally passionate and demonstrative of ethnicities and discussed—it is, at most times, a sterile, antiseptic and coldly analytical telling. With such patently extensive research, such overwhelming evidentiary support, the academic author could have easily infused the dynamism with which she distinguishes Italian stardom in the telling of it. Where is it written that academic material must be written in unanimated, flat language, especially on such a volatile topic? How much more stirring would the clarity be, were such a picture truly painted by the narrative, rather than merely reported? How much more lasting the impressions of these magnificent people who graced movie and television screens and gave their audience, if only for an hour or two, a wondrous escape?