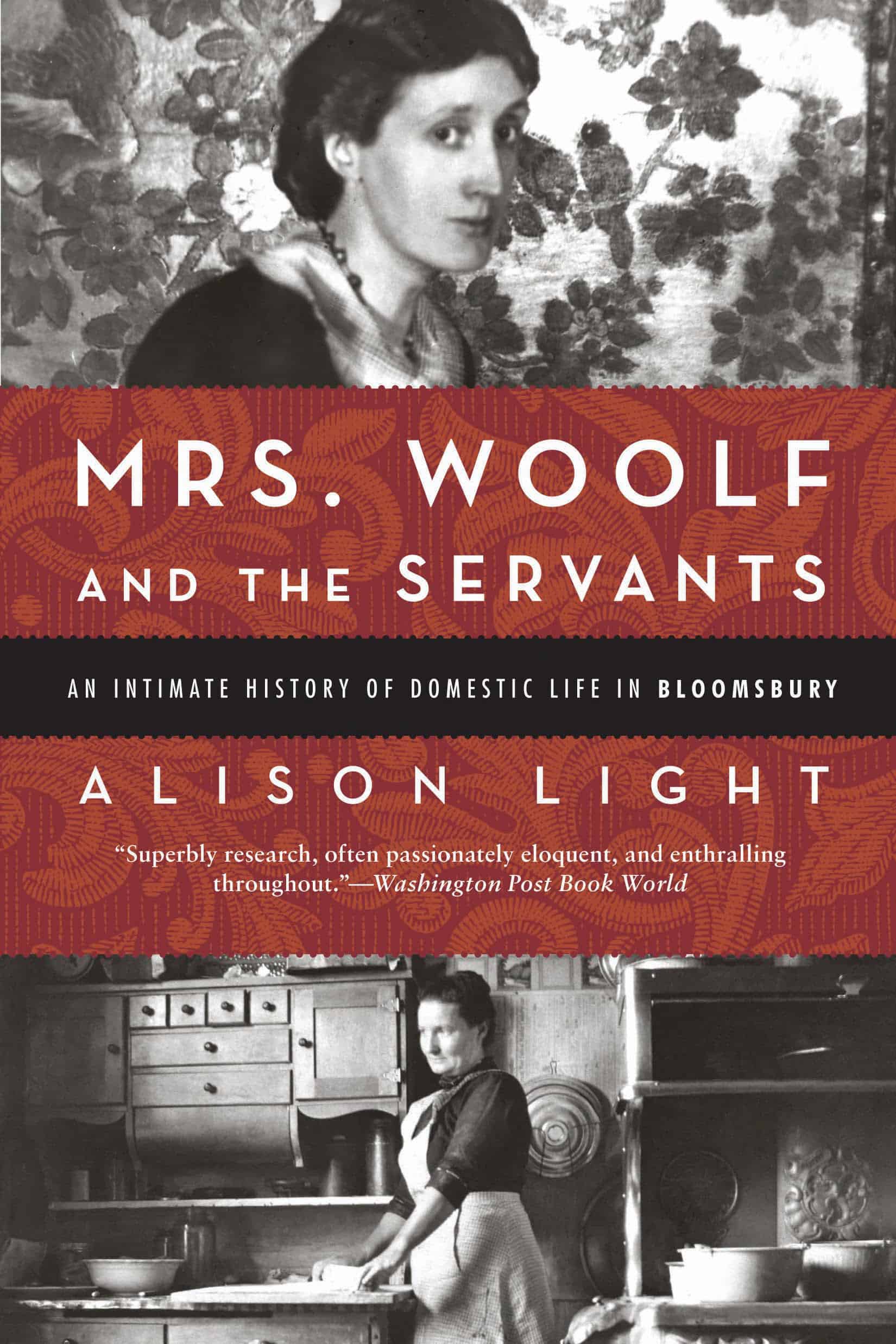 In Mrs. Woolf and the Servants: An Intimate History of Domestic Life in Bloomsbury (Bloomsbury Press, 2008), literary critic and feminist academic Alison Light employs extensive research and elegant prose to challenge our understanding of Virginia Woolf as a champion of women’s rights. Light relies on an extensive and layered critique of Woolf’s diaries, letters, and fiction to explore how this celebrated author, a product of her upper-class upbringing, openly disdained the lower class female servants who cared for her throughout her life. Woolf’s landmark feminist essay “A Room of One’s Own” asserted that “A woman must have money and a room of her own if she is to write fiction.” As Light argues, even a “room of one’s own” needed cleaning, and Woolf, like many of her class and generation, took the cleaners for granted.

Light, who previously edited an edition of Woolf’s novel Flush and also wrote Forever England: Femininity, Literature, and Conservatism Between the Wars, is well-versed in Woolf’s writing and the time in which she lived. Mrs. Woolf and the Servants is divided into five sections. The first section, “The Family Treasure,” explores Woolf’s childhood and the servants of her parents’ household; the second, “Housemaids’ Souls,” focuses on the rise of Bloomsbury and the servants who worked in that circle, and the third section, “The Question of Nelly” looks at the decades in which Virginia and her husband employed her cook/maid Nellie Boxall. (Even though her name was spelled Nellie, Woolf misspelled it—for 18 years—as “Nelly”). The fourth section, “Memoirs of a Lavatory Attendant,” delves deeper into how Woolf portrayed servants in her literature, and the last section, “Afterlives,” looks at the lives of several of Woolf’s servants after they left her employ.

Light, who is currently a visiting professor at Newcastle and Oxford universities, sets the stage for a thorough examination of the predominance of live-in “help” in the Victorian age that Woolf and her peers were born into and the subsequent decline of service through the Edwardian, World War I, and Interwar periods. Light notes that nearly a third of the total female workforce in Britain, during 1900, served as domestic help, and by the early 1930s this percentage had dropped to one-fourth. As employment opportunities opened up with the advent of manufacturing, secretarial work, and other professions, fewer women were interested in working as “domestics.” Combined with this new trend was the advent of modern technologies, such as refrigeration, indoor plumbing, and vacuuming, all of which lessened the amount of work that households needed to function properly.

Throughout her life, Virginia Woolf was served by women. She was raised in a household with several live-in cooks and maids. As she entered young adulthood and moved from house to house with relatives, some of these same cooks and maids followed her. Woolf struggled with the changes in domestic service; she remembered fondly the old-fashioned, obedient Victorian servants of her parents’ household and saw the “Georgian cook” of the early 20th century as a troublingly independent figure. Light meticulously documents the below-market wages and old-fashioned tasks Woolf’s servants were expected to be content with (for many years, the Woolfs refused to modernize their summer house with “water closets”—bathrooms—making servants empty chamber pots).

Woolf and her fellow Bloomsbury members were pacifists, socialists, and feminists. But as Light so ably demonstrates in this work, when it came to Britain’s class system, Virginia Woolf and her Bloomsbury colleagues (who traded servants among their households for decades) were not open or enlightened. Many times, the phrases that Woolf used to describe the servants were shocking in their prejudice. At one point, when Nellie Boxall was sick, Woolf commented that “the absence of lower classes” around her home was “a divine relief.” She criticized her cook for having “hysteria,” even though Woolf herself was hospitalized for the same ailment. In one diary entry, she wrote, “I must go and see what that poor gaping imbecile my charwoman is doing about dinner.” And in another patronizing passage, Woolf noted, “The poor have no chance; no manners or self-control to protect themselves with; we [the upper class] have a monopoly of all the generous feelings.” Light imparts many more troubling examples of Woolf’s attitude toward the household staff, but she also deftly reveals how this influenced Woolf’s novels. She examines several passages which highlight servant characters, and finds that they are often used as symbols to “clean away” the past and make way for the future—not a future for themselves but Woolf’s upper-class heroines.

To help counter Woolf’s voice, Light does an admirable job of reconstructing the lives of the Woolf family’s maids and cooks. It’s a daunting task, since these women, like many working-class people, had little time to write. But Light’s extensive research leaves the reader with a strong impression of what it was like to work in Woolf’s household. Light also unearths a surprising nine-page letter Woolf received from one Agnes Smith, who worked as a weaver. She criticized Woolf for the class prejudice in her book Three Guineas. Smith wrote: “Your book would make some people think that you consider working women, and the daughters of educated men as a race apart. Do you think we enjoy being ‘hewers of wood and drawers of water,’ that we do menial tasks from choice and are fitted for nothing else?”

There is no doubt that Woolf was a groundbreaking feminist and a talented modernist writer who explored the ways a male-dominated culture often limited women’s lives and freedoms. Light’s Mrs. Woolf and the Servants does not take away from Woolf’s contributions and accomplishments, but it constructs a portrait of the writer that reveals her to be more complicated, more imperfect, and, ultimately, more human.