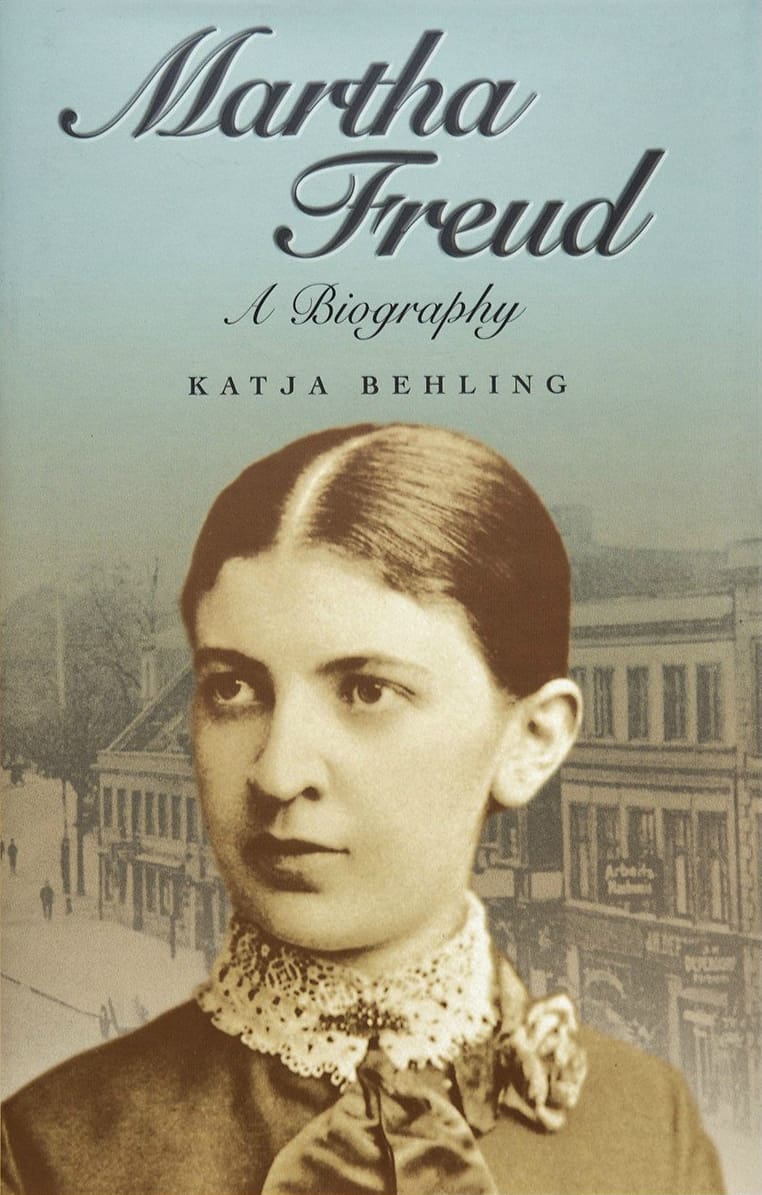 Those who wish to study the founding father of psychoanalysis, Sigmund Freud, may turn to any of the thousands of volumes profiling the man and his work. But for insight into the woman who was at Freud’s side for 53 years, his wife Martha, there are fewer choices available—so few, in fact, that Katja Behling’s biography is the first to focus exclusively on Frau Freud.

In Martha Freud: A Biography, Behling traces the life of the former Martha Bernays and tells how the granddaughter of a prominent rabbi came to marry one of the world’s most influential atheists.

Born in 1861 in Hamburg, Germany, Martha was the daughter of a merchant and his wife. This highly regarded Jewish family “had acquired respectability rather than wealth,” Behling says, and Martha “was hardly born with a silver spoon in her mouth.” When Martha was six, her father got into some business trouble and went to prison. “The signs are that Martha never got over her father’s misdemeanour, instead declaring it taboo,” the author notes. “Perhaps this was why she constantly strove to be so irreproachably honest and upright, and could hardly have been more conservative or law-abiding.”

After receiving the typical education for a girl of her background—a member of a business family with a strong Jewish faith—Martha discovered a love of learning and was especially interested in art and literature, qualities immediately recognized by Freud when he met her. Invited to stay at the Freud home by his sisters, Martha was at dinner one evening when Sigmund noticed her; he couldn’t take his eyes off her. Behling says he “devoted himself single-mindedly to winning the unusual German girl’s heart.”

Their courtship was soon underway, but finances proved an obstacle, and there would be no quick wedding. Still, Freud considered his winning of Martha’s heart a victory on two accounts. First, the “princess,” as he called her, represented a social victory since she came from a family of higher standing than his own. Second, while from a very religious family, Martha had agreed to marry the admitted atheist.

Freud originally wanted a career in scientific research, but he realized a private medical practice was a better way to provide financially for a wife and family. “In the end,” Behling writes, “it was Martha who set the course for the foundation of Freud’s practice and thus the beginnings of psychoanalysis.”

On September 13, 1886, Sigmund Freud, and Martha Bernays were married in a civil ceremony, with a religious one the following day. The latter was a concession on the part of Freud, who was still an atheist, though he participated in the Jewish wedding rites.

Their first child, daughter Mathilde, was born in 1887, and the Freuds would have six children together. At home in Vienna, Martha excelled in domestic life. Behling describes one episode of vacation planning typical of Martha’s style: “Under her supervision the family pulled off the feat of fitting six excited children, a couple of servants and a whole host of unwieldy luggage into a cramped third-class train compartment, using cushions and blankets to turn the spartan wooden benches into reasonably comfortable and even rather homely quarters—without it all degenerating into pure pandemonium. If need be, Martha would hang a hammock across the compartment and unceremoniously put one of the children up on high. All the while she would be calmly supervising the maids, never losing track of what was going on, never missing a trick or forgetting a detail.” Furthermore, Martha did all this without the help of her husband; knowing such chaos would be torture for him, she insisted he travel to their destination alone.

Martha was assisted in the domestic realm by her younger sister Minna, who lived with the Freud family. While some historians believe Minna was, in fact, Sigmund’s lover, Behling treats the rumors lightly. The family’s life was not without its challenges. Daughter Sophie died of influenza, and Martha had a difficult pregnancy with her last child, Anna.

Her husband’s groundbreaking work always interested Martha, yet she insisted on a separation between his personal and professional lives. The children were never to be used as subjects for analysis.

She is credited, however, with running their home so well, so efficiently, that it enabled Freud to write the books and conduct the studies he needed in this new field of psychoanalysis. When disciples came to their home, and the hot-headed Freud occasionally ruffled a few feathers, Martha smoothed things over.

While the Freuds spent the vast majority of their married life in Vienna, by 1938 the Nazi threat meant it was time to leave. Behling’s account reads like a thriller as she tells of their attempt to pack up quickly and move to London. While the family made it safely there, four of Freud’s sisters died at the hands of the Nazis.

Sigmund had been afflicted with oral cancer for years, and in 1939, he died. Martha continued to guard his reputation and greeted guests in her new role as Freud’s widow. She went on living the productive, well-ordered life for which she was known. Even in her 80s, she supervised the gardening, read, wrote letters to friends, and enjoyed her daily shopping.

Long before Martha died in 1951, Behling says, it had “become clear that psychoanalysis was a broad scientific movement and not just a fad, and the fame associated with it was partly hers.”

Hamburg-based Behling has worked as both a psychotherapist and a medical journalist, and readers will benefit from the therapist’s analysis and the journalist’s storytelling capabilities in this fine book.