Making Marie Curie: Intellectual Property and Celebrity Culture in an Age of Information 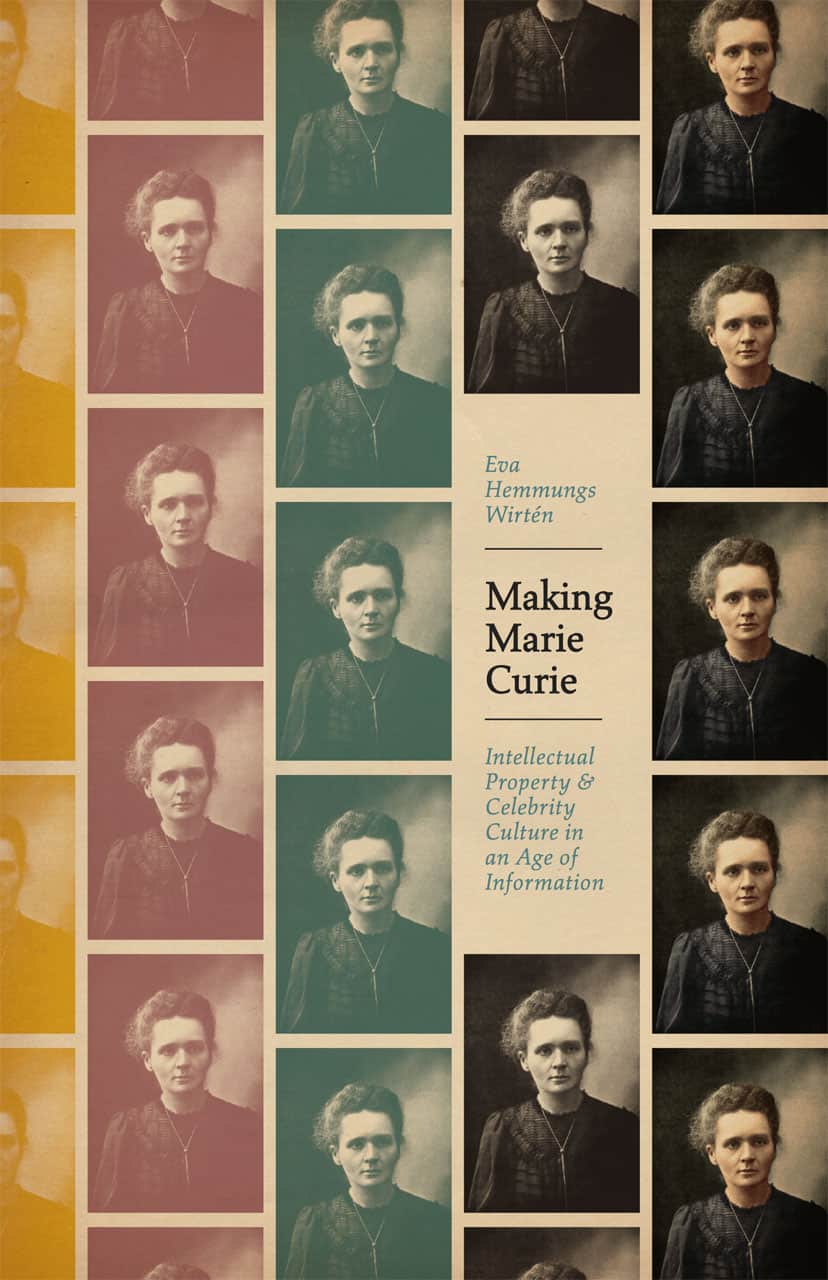 Making Marie Curie: Intellectual Property and Celebrity Culture in an Age of Information

In her introduction to Making Madame Curie, Eva Hemmungs Wirtén, professor of mediated culture at Linköping University in Sweden, explains why she chose to write a new book about one of the best-known women in history. The author was not in search of the real Madame Curie behind the veil of lore that has built up around the life of the Polish-French scientist. As she explains at the beginning of the book, “Authenticity searches are hopelessly quixotic to begin with, but even more to the point, I have never considered the representational bounty surrounding Curie a curtain hiding something really interesting.” Instead, what intrigued Wirtén was our ongoing cultural construction of Curie’s persona.

One of many fascinating facts that emerge in Wirtén’s study is that at the time of the Curies’ famous decision not to patent the discovery of radium, but instead to “publish without reserve,” Curie, as a married woman, was not considered a “legal” person under French law. She was instead in the category of incapable, a designation married women shared with children and the insane. Although garnering distinctions and honors far and wide, she was, like every other married woman of the Third Republic (which lasted from 1870 to 1940), unable to own, control or benefit from either tangible or intangible property. This also pertained to intellectual property, including the discovery of radium, which she made jointly with her husband, Pierre. But when he tragically died in 1906 after being struck down by a horse-drawn carriage, Marie became a liberated woman, of sorts. In Wirtén’s words, “If the death of Pierre meant the loss of Marie’s soul, it also gave his widow a new body. And this body, the widowed body, was entitled to hold property” (page 40).

One of Wirtén’s aims was to discuss Curie in terms of a burgeoning celebrity culture. As the female recipient of two Nobel Prizes, Marie was destined for widespread fame. Though temperamentally unsuited to the spotlight, she learned how to manipulate her celebrity status. But, as Wirtén describes it, Curie had a noble goal: to ensure the future of her field of research, which needed funding.

One example of Curie’s celebrity was what Wirtén calls her annus horribilis—the “horrible year” of 1911 that began with her defeat as a candidate for a prestigious position among the immortels at the Académie des sciences. Though her accomplishments would seem to have made her a natural choice for the vacant position, there was one small problem: the Académie would first have to vote on whether women were eligible. The vote on this question did not go in her favor. Curie lost to her male competitor by only two votes. But she never chose to campaign again, though it was common practice to do so. It would not be until 1979 that a woman—French scientist Yvonne Choquet-Bruhat—was elected to the Académie des sciences.

The latter part of 1911 brought another blow. Curie was discovered to have had an affair with fellow scientist and longtime friend Paul Langevin, a married man. This discovery was precipitated by the theft of some of their letters, and Curie threatened legal action. Because of her fame, the affair couldn’t be quietly swept under the carpet. The public outrage, Wirtén writes, was fuelled by the way Curie had “applied herself scientifically to luring Langevin away from his family, and her reasoning and planning overstepped the very narrow gender role prescribed to her at that time” (page 67). Even more damning, though, was the fact that the scientist, born Maria Salomea Skłodowska in Warsaw, was not French. “What is not French,” complained Maurice Pujo, co-founder of the nationalist organization known as the Comité de l’Action Francaise, was that “there are no sincere cries, always excusable, but cold reasoning” (page 67).

In the end, there were five duels fought over Curie’s honor. As French libel laws were weak, the duels were seen as an effective way to resolve questions of honor. Though we may think of dueling as antiquated, Wirtén points out that a two-minute film of the first of these duels, fought between journalists of rival newspapers in November 1911, is available on YouTube.

Wirtén also recounts the tale of Curie’s first trip to America in 1921, during which she solicited funds for her work. During this trip, she was presented with the gift of one gram of uranium, which cost $100,000—an astronomical sum at that time. Thanks to her influential friend and promoter, an American socialite and journalist Missy Brown Meloney, the money was raised by subscription from a large group of women. Like popular Kickstarter projects of today, the gift was actually overfunded, and the surplus became a matter of some contention, due to the legal restrictions on how it could be used.

Wirtén uses the final chapter to discuss areas of interest that she shares with Curie, namely the problems of bibliography and of intellectual property, which Curie pondered in her role as a member of the League of Nations International Committee on Intellectual Cooperation. She saw the importance of a flexible, concise system of abstracts that could be shared globally, reducing inefficiency and duplication. But she was also interested in securing some sort of income for the originators of important scientific ideas. Although this may seem to be at odds with the Curies’ original idea of “publishing without reserve,” one of Wirtén’s main concerns is to show how Curie consistently walked the fine line between the public interest and her own.