Kant’s Theory of Evil: An Essay on the Dangers of Self-love and the Aprioricity of History 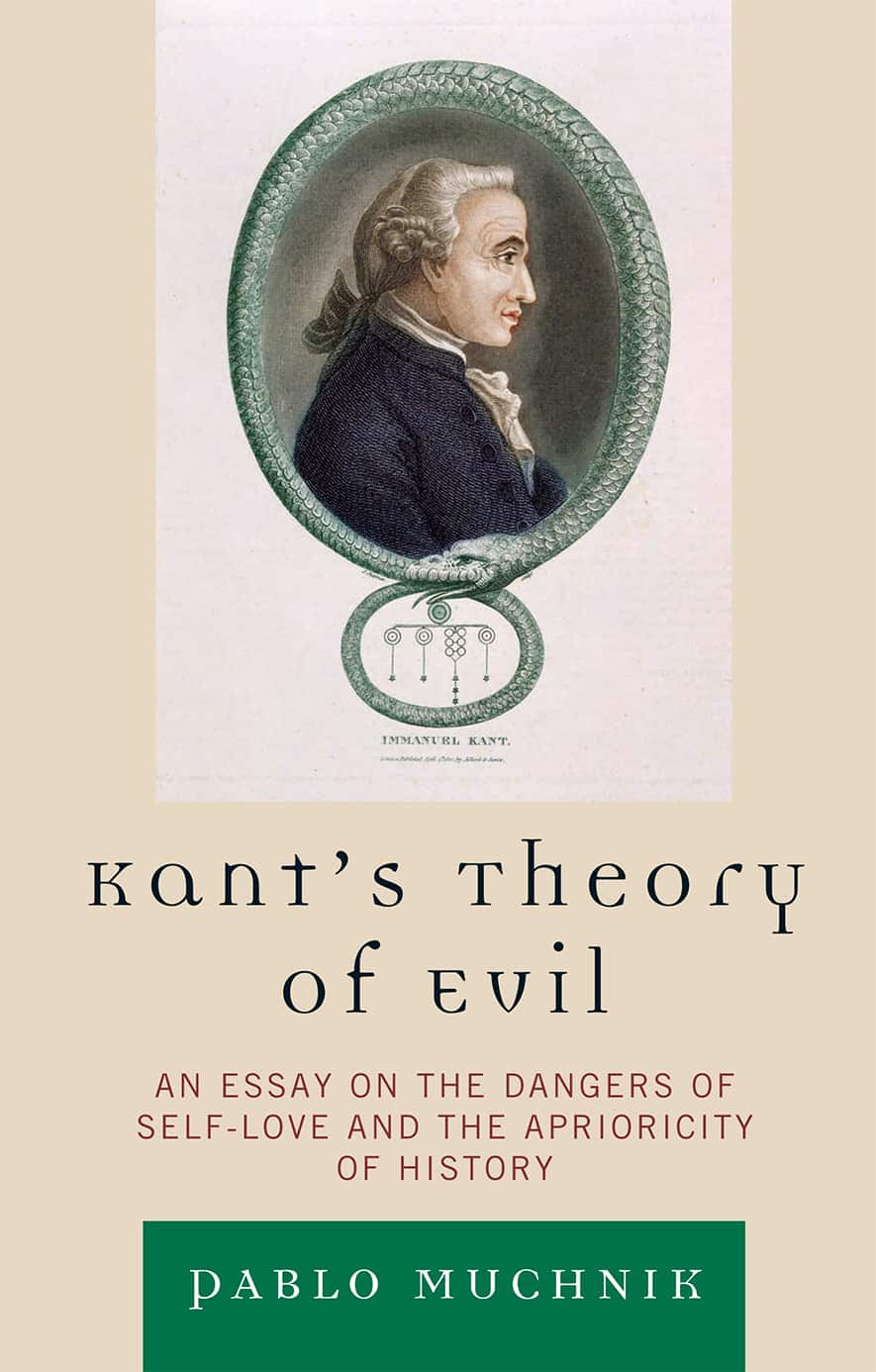 Kant's Theory of Evil: An Essay on the Dangers of Self-love and the Aprioricity of History

Pablo Muchnik’s Kant’s Theory of Evil provides a defense of the continuing relevance of Immanuel Kant’s moral philosophy by systematically addressing interpretive glosses that may be unfair to the renowned Königsberg philosopher. Some criticisms of Kant—that he merely dresses up the doctrine of original sin in philosophical language with his notion of radical evil; that his rigorous insistence on rationality and universality is itself a form of preference or prejudice; that he unfairly demotes the emotions to a secondary status—are all addressed with precision by Muchnik, an Associate Professor at Siena College and a renown Kant expert. The very fine-tuned nature of Muchnik’s analysis makes the book more appropriate for specialists and graduate students, but anyone familiar with at least the Groundwork, the second Critique, and Religion could profitably read the book.

One of Muchnik’s important clarifications describes the nature of radical evil. What makes evil radical in Kant’s estimation is not the extent or degree of wrongdoing but the centrality of the “dear self” in the choice of principles. “‘Radical,’” Muchnik states, “refers neither to the quality nor to the effects of actions, but to the locus of evil; it is a spatial metaphor, not one of intensity or magnitude” (45).  By calling evil “radical,” Kant hopes to get us to “distrust the appearance of virtue (Tugendschein) our actions generally display” (46). Muchnik reflects, with Kant, on the question that Glaucon posed to Socrates in the Republic (book 2): How do we tell the difference between what really is goodness and what only seems like goodness? All of us have an arsenal of tactics to prevent ourselves from seeing how we really go about making decisions, and this deck stacked in favor of the self is what is meant by radical evil.

This leads to another one of Muchnik’s somewhat startling observations: The categorical imperative—exhorting us to choose only those maxims or principles we could recommend to others—only works for those who are already good. That is, one must have already made the revolution in values that displaces the self from the center and leads into the universalist thinking that takes others equally into account. For “what moves the virtuous will leave the ‘fool’ impassive,” and only those with an unflinching attitude of self-criticism will benefit from the tests of the categorical imperative (95). That the Kantian philosophy can become just one more complicated rationalization says little about its failure but serves to further underline the propensity to evil that Kant recognizes.

Muchnik’s book is very strong on the social dimensions of radical evil. By making the shift into the kingdom of ends, the ethical subject chooses not only for itself. Rather, it wills a society that rewards virtue instead of doling out rewards to the strongest or most cunning (or perhaps in today’s “celebritocracy,” the person who has had the most plastic surgery). The highest good is a just society, and one who has made the shift to the kingdom of ends makes that just society the goal of action. Muchnik writes that “Kant’s vision contains an ‘anthropodicy’: the highest good in a project that finds our redemption in justice and human solidarity” (67, quoting Philip Rossi). In contrast to the impoverished notions of freedom prevalent today (such as freedom from external constraint or violence), Kant describes a freedom that depends upon our mutual ability to forego our own limited gain in favor of a higher good.

The propensity to evil, is, of course, one of the most controversial aspects of Kant’s philosophy, and one which Muchnik takes great pains to clarify. Kant’s claim, it is important to remember, is neither a naturalistic nor a theological statement; humans are not predestined to evil or are naturally evil. If they were, this would take away all of the moral responsibility for what they do. The propensity to evil is neither a generalization of human behavior nor a transcendental, a priori claim about human behavior. It has, rather, a hybrid status: The propensity to evil is an inference or set of inferences about what lies beneath the surface of human decision-making. We may never be able to open the black box of a person’s motivations, but we can see the neglect of duty in the refusal to consider actions that would lead to the “highest good” of creating a “world in which happiness follows in proportion to virtue” (67).

Kant would have us move out of the isolation of the individual self, what poses as autonomy, for the greater freedom, the greater autonomy, of choosing a world in which people live in just relations with each other. He envisions a world in which people are not content to live in a ghettoized moral community of others like themselves but rather give leeway to those who are perceived as equally valuable. Kant’s philosophy could prove a valuable antidote to the short-sightedness and vacuity of our age, and Muchnik’s new book will hopefully lead more people to look closely at themselves and society in the mirror of philosophy.