Gertrude Stein and the Making of an American Celebrity 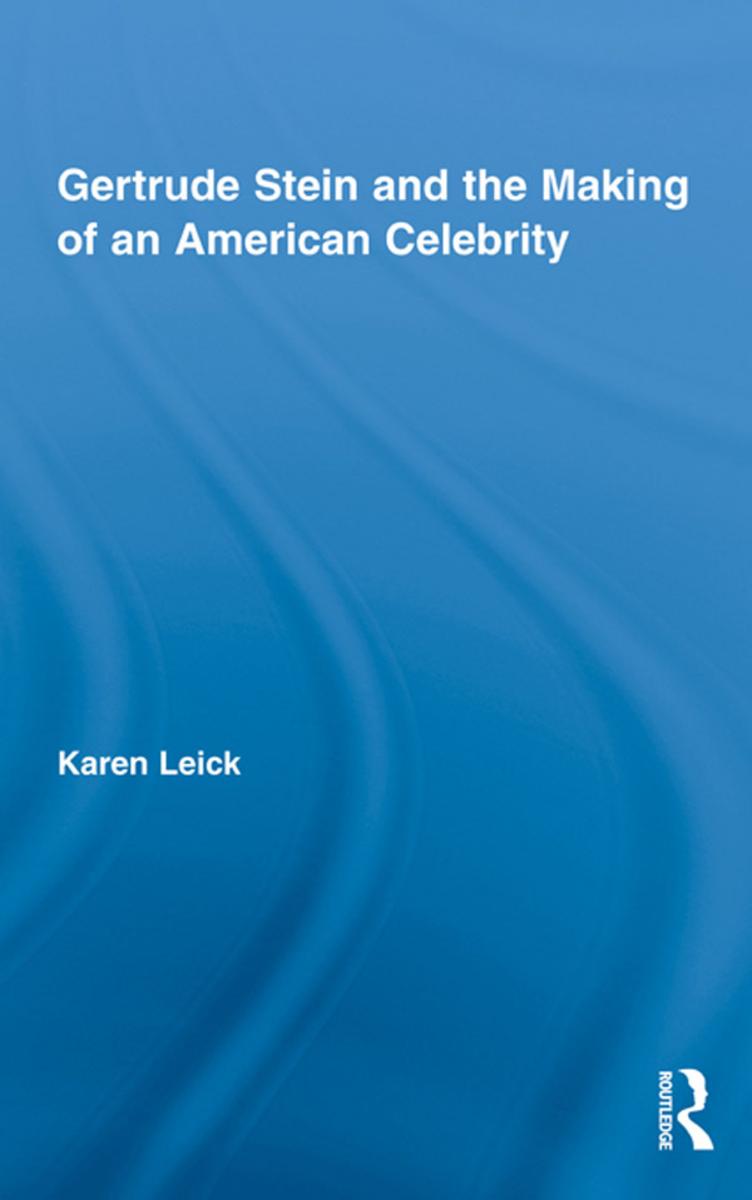 Gertrude Stein and the Making of an American Celebrity

Karen Leick’s Gertrude Stein and the Making of an American Celebrity refutes the notion that Stein, as a high-modernist aesthete, labored in relative obscurity, unknown to the American public, before the wildly successful publication of The Autobiography of Alice B. Toklas in 1933. Leick, a Lecturer at the University of Illinois at Chicago, has assembled a massive collection of references from early-twentieth-century newspapers, magazines, literary journals, advertising, personal and business correspondence, and other sources, which together establish that Stein was a famous public figure in the U.S. long before the Autobiography—a celebrated (and vilified) writer well known for the oddity of her work if not for the work itself. In contrast to today’s practice, Leick reminds the reader, earlier mainstream journalists eagerly followed developments in the art and literary worlds; Stein’s active participation in both spheres ensured her mention in ongoing discussions of modernism, experimentation, and the public response to innovation. Like James Joyce and Virginia Woolf, who also became best-selling authors in the 1930s, Stein was able to capitalize on pre-television America’s appetite for literary novelty—in her case, a novelty variously described as revolutionary, amusing, or beneath contempt.

Gertrude Stein and the Making of an An American Celebrity builds on the work of Loren Glass, who, in Authors Inc.: Literary Celebrity in the Modern United States, has argued that Stein “entered into an already-established authorial star system in which the marketable ‘personalities’ of authors were frequently as important as the quality of their literary production.” (3) While most reviewers of Stein’s first published book, Three Lives, knew little about her life in Paris, one newspaper review presents her as a familiar figure in the Latin Quarter and makes much of her personal eccentricity, her charming but “strong personality” and “utter disdain of conventionalities”—offering as proof her unfashionable clothing (a brown suit and brown sandals) and ample girth. “The corset, that modern invention of the suppression of unruly flesh, is an unknown article in the simple wardrobe of the fearless Miss Stein.” (29)

This kind of characterization, appearing first in 1910, was to be repeated through the 1930s, aligning image and persona with the idiosyncrasy of the work. (Though the American press frequently referred to Stein’s short hair as “mannish” or “masculine,” and though, after the publication of the Autobiography and the subsequent U.S. lecture tour, it became clear to the public that Alice B. Toklas was the author’s long-term personal assistant, the women’s intimate relationship was not publicly acknowledged in the U.S. during Stein’s lifetime.) But another account of the author’s personality emerged in the course of the promotional tour of 1934-1935. When the notorious iconoclast proved to be unpretentious, charismatic, and entertainingly witty, a number of commentators who attended the lectures were quick to complicate prevailing portraits of Stein as a fiercely bohemian other. Suddenly—and sensationally—she was “lucid,” “amiable,” “unassuming,” “folksy,” “good-humored,” “grandmotherly,” “democratic” and “conclusively American.”

Leick has chosen to present her findings chronologically—a chapter for each decade, from the 1910s through the 1940s—a strategy that allows readers to follow the intricate twists and turns of Stein’s complex reception, which varied according to the accessibility of her books and the availability of anecdotal tidbits about her personal life. Leick’s coverage is exhaustive, almost overwhelming in its detail, but this compendious approach puts to rest some erroneous assumptions that have plagued Stein scholarship since the development of high modernism as an academic literary concept.

Whereas Clement Greenberg’s influential essay “Avant-Garde and Kitsch” (1939), which depicts modernist aesthetics as a defense against consumer-culture mediocrity, may speak for a significant number of artists, many modernists courted and/or welcomed commercial success. With regard to the masses, Stein told one reporter that “I like ordinary people who don’t bore me. Highbrows do, you know, always do.” (4) Despite the opacity of much of her work, she actively lobbied for publication in a wide range of venues, appearing not only in progressive literary journals but in mainstream periodicals such as Life, Vanity Fair, Vogue, Cosmopolitan, and the Saturday Evening Post.

While reviewers and columnists were largely responsible for making Gertrude Stein a modernist icon for middle America—through criticism, gossip, quotation, and parody—Leick’s research makes clear that Stein was herself a savvy marketer, continually seeking ways to expand her audience. From a twenty-first-century vantage point, however, some of her strategies seem highly problematic. During the lecture tour, for example, a drawing of Stein and Toklas and their automobile appeared on a brochure advertising Ford cars—though Henry Ford’s Dearborn Independent had published several anti-Semitic articles in the 1920s—leaving the reader to wonder whether, for both Stein and Ford, the drive for popular promotion trumped everything else. (Leick also alludes, in passing, to Stein’s translator, promoter, and Vichy protector, Bernard Faÿ, but the later years in France are beyond the scope of this project.) Whatever one’s reading of Stein’s motivations, the materials provided in this book constitute a valuable case study, not only of constructed literary stardom but of the pervasive functions of print media at their most powerful, assimilating disparate elements and shaping popular responses in the service of an early-twentieth-century marketplace.