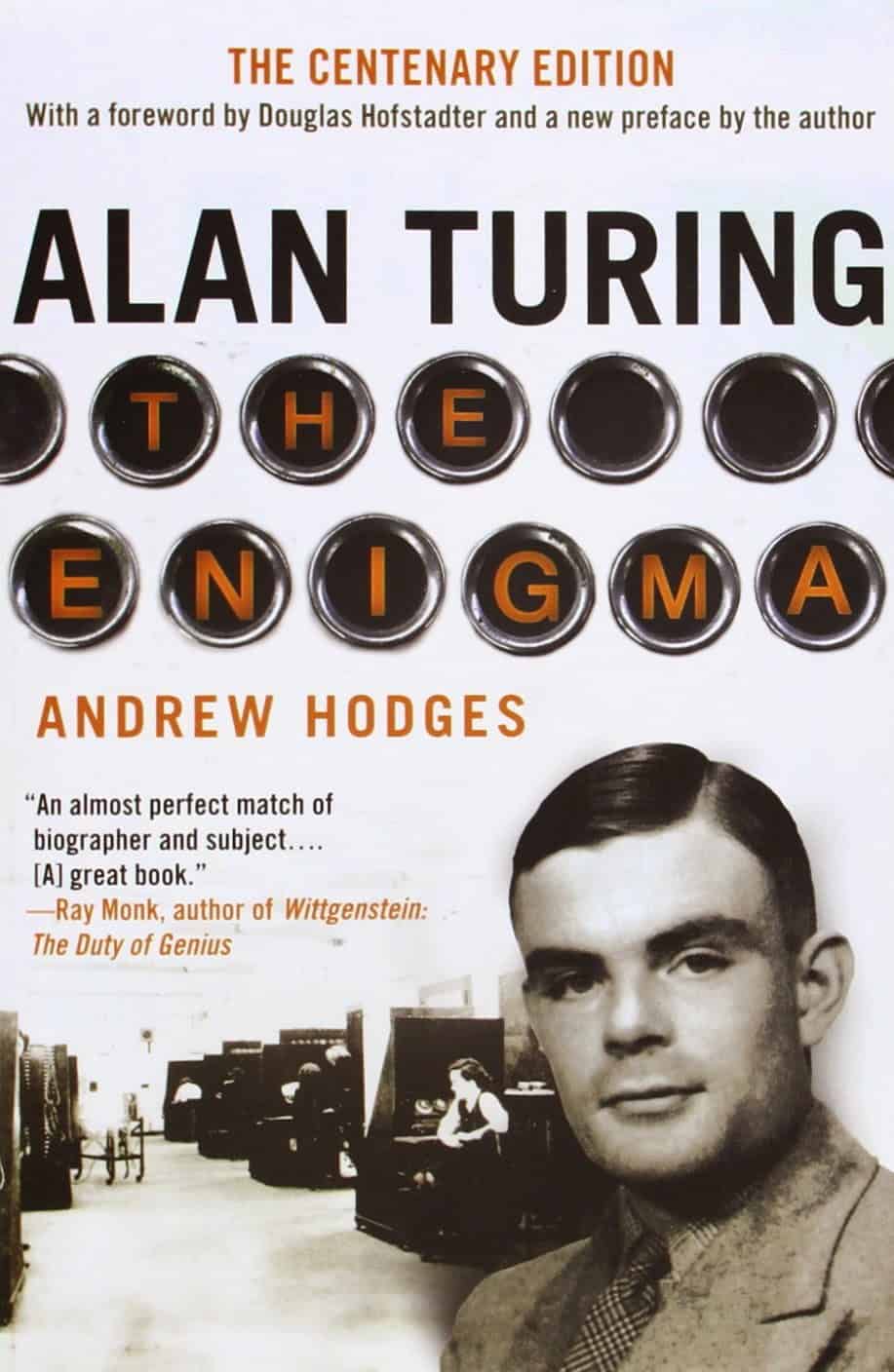 During the past year, thanks to the movie The Imitation Game, Alan Turing has emerged from history’s shadows, where his memory had languished for decades. For anyone whose interest in the pioneering computer scientist, mathematician, and logician was piqued by the film, the book that served as the film’s source material, Andrew Hodges’s exhaustive biography Alan Turing: The Enigma, has the answers. This book was originally published in 1982 and reissued in 2012 for the centennial of Turing’s birth.

The subtitle, of course, refers to the famous cryptographic machine used by the Germans during the Second World War to stymie the Allies. But it also reflects Turing’s difficult-to-decipher personality. Born in 1912, Turing attended the Sherborne School and King’s College at Cambridge University. By the time Hodges—a British mathematician and author—reaches this point in Turing’s life, he has already begun to examine his subject’s budding sexuality, quoting liberally from a 1912 primer titled Natural Wonders Every Child Should Know, which Turing received at age ten.

Turing never really outgrew the social awkwardness of his adolescence, although his time at Sherborne was marked by his first true (but never consummated) love—Christopher Morcom, a brilliant student with interests in mathematics and science. In late 1929, both Morcom and Turing took the examinations for Trinity College, Cambridge, but only Morcom was successful in receiving an open scholarship. Unfortunately, he died of bovine tuberculosis in February 1930. As Hodges makes clear, the effect of his death on Turing played a role in shaping his personality over the next six years. When the Morcom prize was established at Sherborne, Turing was the first winner, receiving, fittingly, a book on cryptography.

Hodges determines that the event that exorcised Turing’s emotional dependence on his dead friend (a point where The Imitation Game diverges from the book) was the completion of his seminal paper “On Computable Numbers, with an Application to the Entscheidungsproblem.” Originally posed by German mathematician David Hilbert, The Entscheidungsproblem was a three-part problem. Briefly, it questioned the completeness, consistency, and decidability of mathematics. In the early 1930s, the first two questions were essentially solved by Kurt Gödel’s incompleteness theorems, and the third question was what Turing tackled in “Computable Numbers.” The celebrated application became known as the Turing machine, though Turing preferred to call it a universal machine—one that he envisioned would solve all mathematical problems using binary application. By this time, though still in his early 20s, Turing was a fellow at Cambridge. He spent part of his initial three-year fellowship at Princeton University, where he made contact with other prominent mathematicians like John von Neuman and G. H. Hardy. However, the Second World War interrupted Turing’s fellowship and, in fact, his career as a mathematician.

Turing joined Britain’s top-secret Government Code and Cypher School at Bletchley Park, where he and many others worked on cracking the Enigma codes. As the book makes clear (though the film does not), there were a number of Enigma machines in use by the Germans. Turing’s purview was the very important naval Enigma. He and his colleagues at Hut 8 (the Enigma and other code-cracking work was divided up and performed in various “huts” at Bletchley) were tasked with cracking German naval codes. Since Nazi U-Boats were winning the all-important Battle of the Atlantic, this was a matter of Britain’s survival. Although Turing was not quite the lone-wolf genius that the film makes him out to be, he was first among equals in Hut 8. The code-breaking machine called a “Bombe” was originally designed by the Poles in the 1930s. But their Bombes—the technology for which was passed on to the British—became obsolete as the German Enigmas got more sophisticated. Turing was the primary designer of the first British Bombe, although his Bletchley Park colleague, Gordon Welchman, suggested certain modifications. (Welchman was also one of the five signers, along with Turing, of the letter to Prime Minister Winston Churchill—though the film depicts Turing as the sole signatory). After the United States had entered the war, the construction of Enigma-analyzing Bombes increased exponentially. Eventually, code-cracking was performed by the all-electronic “Colossus;” Turing played little, if any, part in creating its precursors, as he was a British liaison in the United States at the time. Nevertheless, Turing’s ideas on statistics, “with its formalization of ‘likeliness’ and ‘weight of evidence,’ and with its ‘sequential analysis’ idea” were used.

Hodges does a good job of explaining the events and timelines of Turing’s wartime activities, though there are sections the uninitiated reader has to read through carefully, and perhaps more than once. And when it comes to delving into Turing’s private life, the author handles the subject boldly. Admittedly, when the book was first released in 1982, it was far more courageous to declare his subject a “homosexual atheist”—as Hodges does on more than one occasion—than it is nowadays. Nevertheless, there is an element of pathos to Turing’s private life—both the comic and tragic kinds. Hodges details a string of attempts by Turing to initiate sexual liaisons with colleagues, only to discover that they were straight and shocked at Turing’s own sexual preference. Clearly, for a time, Turing’s deficient social skills extended to faulty “gaydar”—the intuitive ability to assess the sexual orientations of others. In his platonic relationship with Joan Clarke, a fellow mathematician at Bletchley Park to whom he was briefly engaged, one senses Turing’s level of integrity. It was he who broke off their engagement, and one never feels that she was at any time a “beard” for him (except, perhaps, to his family who were clueless about his homosexuality).

Eventually, Turing drifted away from Bletchley Park to another super-secret installation—Hanslope Park, where he focused on, among other things, speech encipherment.  He also began giving serious thought to what later became known as artificial intelligence. He “talked in terms of an imitation principle: that if a machine appeared to be doing as well as a human being, then it was doing as well as a human being.” Although there is a self-evident weakness to this argument, it was a springboard for Turing’s post-war activity and thought, at least until 1950.

Hodges points out that beginning in 1935 Turing switched his focus every five years, sometimes by choice, sometimes not. In 1935, he began writing “Computable Numbers,” but in 1940, he was thoroughly enmeshed in cryptography. In June 1945, after the defeat of Germany, Turing was recruited to join the newly created Mathematics Division of the National Physical Laboratory (NPL). His immediate superior was mathematician J.R. Womersley, toward whom Turing occasionally showed disdain. Womersley’s own superior was Sir Charles Galton Darwin, grandson of Charles Darwin.

It is over the next five years that Turing’s enigmatic nature worked toward his professional detriment. At NPL, he became involved with the project to design and build an Automatic Computing Engine or ACE. (The term “engine” was used to differentiate from a “computer,” which at the time was the term for a human who did advanced computations, and was also an homage to the 19th-century British mathematician Charles Babbage, who envisioned an “Analytical Engine” that would mechanize mathematical operations.) At this time Great Britain competed with the United States in the postwar computer race. The U.S could already boast of ENIAC, designed at the University of Pennsylvania. Like the Colossus, ENIAC was designed to perform only a specific, military task. As such, it was far from Turing’s universal machine. On the other hand, ACE had its origins in “Computable Numbers,” and in its original design was to be the universal machine he had been envisioning for nearly a decade.

Unfortunately, Turing’s own role in its creation was eventually overshadowed by others, notably by M. V. Wilkes of Cambridge University. The Cambridge connection was ironic, since both Wilkes and Turing had been mathematics “stars” at the University more than a decade earlier. Wilkes had returned to the University where he established himself in the new field of computer technology. As Hodges details it, Turing, his fellowship renewed in the postwar years, also returned to Cambridge but never collaborated with Wilkes, feeling a combination of disdain and inferiority at Wilkes’s political advantage. At any rate, Wilkes’s ACE was something less than the Universal machine, although it still owed its origin to “Computable Numbers.”

However, Turing was still part of Britain’s fledgling computer research. At Manchester University, Max Newman, who had also been at Bletchley Park, was appointed professor of pure mathematics and was now intent on creating a computer independent of the NPL (which Wilkes’s computer was not). Turing was hired in 1948, but not before he had completed for NPL his paper “Intelligent Machinery,” outlining his vision of ACE.

At Manchester University, Turing produced a Programmers’ Handbook For Manchester Electronic Computer Mark II. By the late 1940s, he became so enmeshed in this new field that he was no longer a top-tier mathematician, not having worked in the higher realms of the field since before the war. For a while, he was a top dog at the Manchester University Computing Laboratory, even after the computer was built. But here, too, his life seemed to follow the familiar pattern established at Bletchley Park and reinforced at NPL: gradually his role in the project diminished. This was especially true after the arrival of computer scientist and pioneer in programming language design, Christopher Strachey.

In 1950, the journal Mind published Turing’s paper titled “Computing Machinery and Intelligence,” which laid the ground for the now-famous Turing Test. By then, Turing was a leading proponent of the possibilities of a thinking machine—artificial intelligence. As such, “Computing Machinery” served as the bookend to “Computable Numbers” and to Turing’s career in the field. As Hodges points out, by the time the article was published, Turing had moved away from computers and on to morphogenesis, one of the three biological processes of cellular production that determines an organism’s shape. Turing was initially drawn to this field from a mathematical standpoint: the recurrence of the Fibonacci sequence in nature. In November 1951, he submitted a paper to the Royal Society on his morphogenetic theory. This was eight months after he had been elected a fellow of the Society, an honor he took far more seriously than the OBE (Order of the British Empire) he had received in 1946 for his work at Bletchley and Hanslope. In 1952, the Society published his article, “The Chemical Basis of Morphogenesis,” but by then Turing’s life had taken an awkward turn.

In late 1951 he had become sexually involved with 19-year-old Arnold Murray, leading to a series of events loosely portrayed in the movie: a friend of Murray, hearing of the relationship, burglarized Turing’s home. When the police caught the thief, he told about the relationship. The police then questioned Turing (and Murray) who naively revealed the truth, not realizing that homosexuality was a crime. Found guilty, he chose to undergo hormonal treatment instead of imprisonment. In September 1953, his position at Manchester University was set to expire, but a new post—readership in the theory of computing—was created specifically for him. Hodges mentions this to show that even after the discovery of his homosexuality, Turing had the support of his colleagues and friends. He also reveals that during this period Turing was seeing a Jungian analyst and had broadened his literary interests to include the works of Leo Tolstoy. (Hodges also talks about Turing’s fascination with George Bernard Shaw, particularly his play, Back to Methuselah.)

Turing’s life, outwardly, at least, appeared back on track until the night of June 7, 1954, when he committed suicide by eating a cyanide-laced apple.