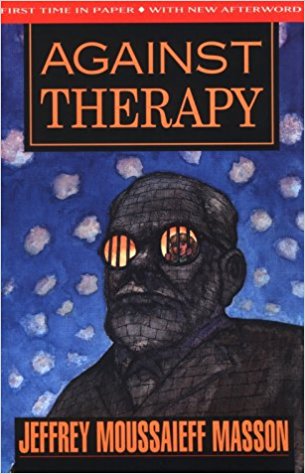 Jeffrey Moussaieff Masson’s book Against Therapy turns the entire concept of the practice of psychotherapy on its ear. In fact, it might as well be on a deaf ear since Masson alleges that psychologists come to the couch with their own inherent preconceptions and prejudices, which will trickle down to the patient. The book was initially released in 1988 and, not surprisingly, stirred controversy at the time of its publication.

The author is highly qualified in the field. Although he holds a Ph.D. from Harvard University in a seemingly unrelated field of Sanskrit, he is also a Freudian analyst and former Project Director of the Sigmund Freud Archives. However, when Masson contended that Freud made a mistake by stopping to believe that sexual abuse was the cause of human suffering, he was fired from the archives and his membership in the international society was revoked.

In the wake of this controversy, Masson penned multiple books expressing his disagreement with the therapeutic-psychiatric community. He felt that in the interest of professional appearance and convenience—since his theories were ostracized by his peers—Freud had not possessed the courage to stay on the correct path identifying women who’d been sexually abused as children and citing the dire implications for the psychiatric community.

“The faults of Carl Rogers … are not the faults of individual therapists; they are the faults of therapy per se. No amount of reform could abolish these faults, because they are endemic to the very nature of psychotherapy,” Masson writes.

Masson staunchly avers that the concept of therapy is flawed and, therefore, should not be employed at all. To illustrate this point, he cites many cases where psychiatric patients were “treated” in an extremely abusive manner. The evidence amasses with each turn of the page, and the reader feels surprised, repulsed, shocked, and angry as the book moves along.

The author asserts that the definition of what is normal in society is fluid and attempting to put one person into a mold is not only highly difficult but also wrong. Who are psychologists/psychoanalysts to judge another human being and their personal set of norms? Masson writes that his life “was in no better shape than that of my patients.”

In fact, he maintains that a good friend is a much better confidante than a mental health professional. The PhDs and MDs are not always naturally empathetic, he argues, and taught responses might not be helpful and could actually exacerbate the patient’s condition. Masson supports this argument with numerous examples of therapists, who were unable to help their patients.

In an updated version of the book, Masson responds to his critics. “I must address the concern, widely expressed, that I have not offered any alternative to psychotherapy,” he writes. “I have repeatedly expressed my resistance to being placed in the position of pretending to have a solution. I did not, and still do not feel that in order to criticize the current state of affairs in psychotherapy I must offer a better alternative.”

Fair enough, yet the reader cannot help but feel at least a bit duped. It’s like watching a movie all the way through to find out who the killer was only to have the film end without bringing closure. The author has since ceased writing about the therapy issues, focusing instead on fiction and nonfiction books about animals, including his 2011 work: “Dogs Make Us Human.” This makes the reader wonder if perhaps, one day, our empathetic canines will prove to be the most successful “therapists” of all? If you go by Jeffrey Moussaieff Masson’s philosophies from Against Therapy, they certainly could do no worse.