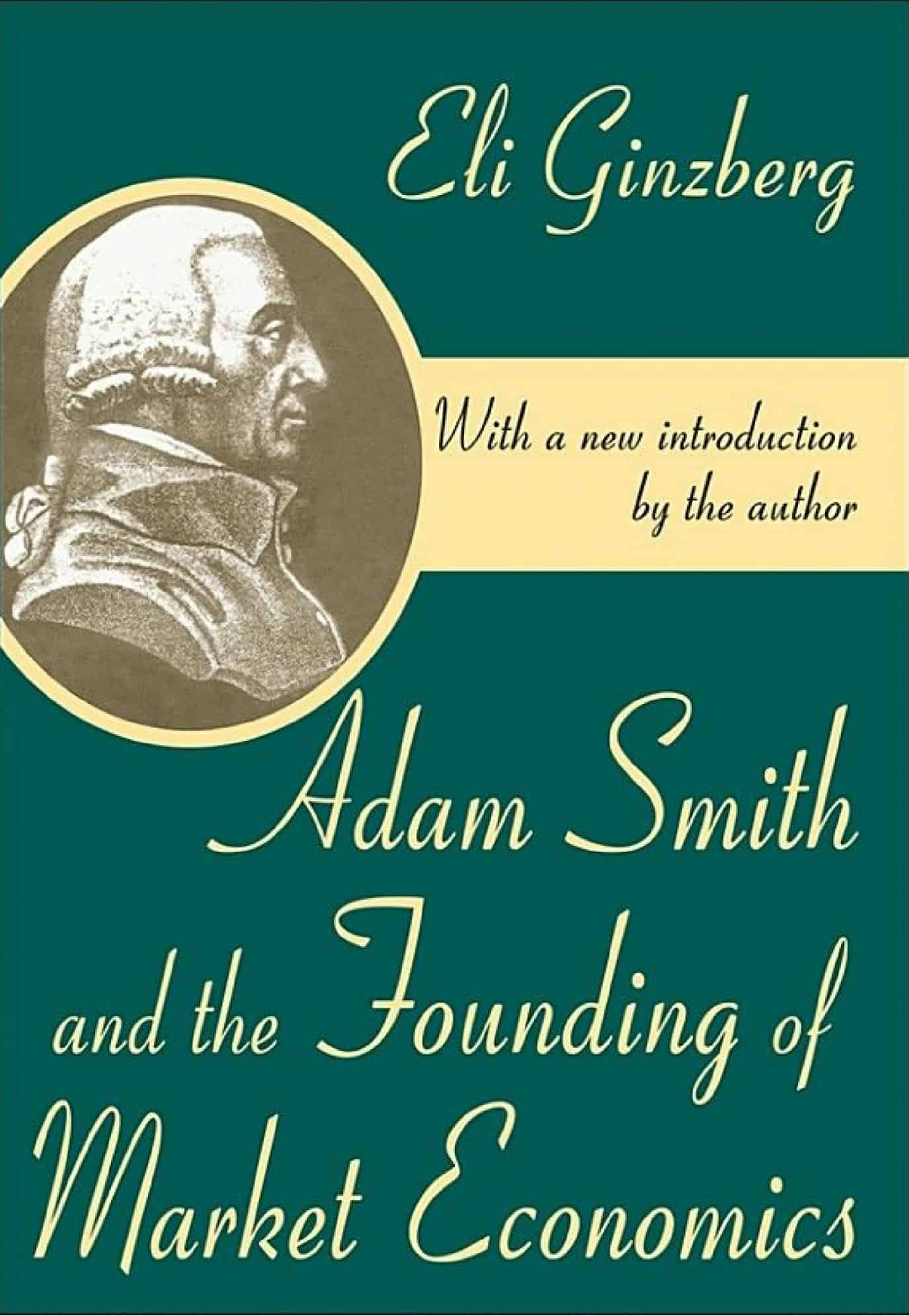 In 2005, the Federal Reserve Board Chairman Alan Greenspan delivered the Adam Smith Memorial Lecture in Kirkcaldy, Scotland. Here, at the birthplace of the great philosopher, Greenspan lauded Smith as “a towering contributor to the development of the modern world” whose 1776 work An Inquiry into the Nature and Causes of the Wealth of Nations “reached far beyond the insights of his predecessors to frame a global view of how market economies, just then emerging, worked.” More recently, the Nobel Prize-winning economist Joseph E. Stiglitz repeated the widely-held view of Smith as ‘the father of modern economics.’

These sentiments also underpin Eli Ginzberg’s Adam Smith and the Founding of Market Economics. Ginzberg (1909-2002) was Professor Emeritus of Economics at Columbia University, and he published extensively on the policy impact of human resources, attributing his lifelong interest in this field to his earlier interest in Smith’s writings. Ginzberg’s doctoral thesis in economics was published amidst the Great Depression in 1934 as The House of Adam Smith, and the volume under review is an overdue re-publication, from 2002, with a new introduction.

The book is divided into two parts, with the first deconstructing and interpreting The Wealth of Nations, and the second more speculative and polemical, hailing Smith as the great founder of classical liberal thought while criticizing those (including the Classical Economists and President Herbert Hoover) who hijacked his legacy for their own ends. Ginzberg’s work is a provocative if somewhat hagiographical account of Smith’s prescience, imagination, logic, and humanity. Contrary to orthodox modern academic practice, Ginzberg adopts a broad-sweep (and occasionally disjointed) approach. His method, across several chapters, is to assess the concepts relating to moral philosophy, natural law, economics, and history, to demonstrate Smith’s genius. With impressive if often turgid prose, Ginzberg argues that Smith’s great philosophical observations and discoveries were later distorted and subverted to provide a theoretical basis to justify economic and political inequality characterized by disparities of wealth and political power. In contrast, Ginzberg asserts that Smith extolled the virtues of the laboring classes and sought to enhance their social and economic status (pp.139-40).

With an emphasis on the civic and communitarian as opposed to the individualistic elements of enlightened self-interest, Ginzberg casts Smith in the guise of moral and social reformer and anti-monopolist rather than the founding theorist of laissez-faire capitalism. Ginzberg states:

“The master manufacturers and merchant princes would never give up part of their wealth in order to improve the condition of the petty artisan and the tenant farmer. Smith knew, however, that if the majority of the citizens could be convinced that his proposals would enhance their welfare his reforms might more easily be achieved” (p.234).

Citing Smith’s interest in national as opposed to individual welfare, Ginzberg argues that Smith believed increasing the ‘individual’s scope of action’ was the most effective way of advancing the prosperity of the community:

“Unseen hands facilitated this transformation; the procedure was not, however, very mysterious; it depended only upon the establishment of perfect justice, perfect liberty, and perfect equality” (p.129).

The notorious ‘Invisible Hand’ guiding the market forces of resource distribution and allocation to promote the public good may have owed something to Providential-type terminology, but recent writers reject the idea that Smith subscribed to any link between theology and economic behavior. It was in the material world that Smith laid the theoretical foundations of Classical Liberal thought and action, notably by demonstrating the mutual benefits derived from open international trading relationships, Smith discredited the mercantilist theory.

For Smith, the division of labor (demonstrated with fine clarity via the famous example of the pin factory) and enlightened self-interest, the mainsprings of domestic economic growth, were impeded by the customary regulations, trade restrictions, and misallocation and inefficient use of resources characteristic of mercantilism. As an economic philosophy, the zero-sum battle for resources characteristic of mercantilism was undoubtedly primitive in nature and limited in scope, and mercantilist doctrines did not go unchallenged. As the Universal Merchant (1753) argued:

“That the Wealth of a Nation is the common Benefit of its Neighbors, and that where Commerce flourishes, the People neither merit Envy, nor are to be feared.”

Other writers had, long before Smith, attacked mercantilism, and some time passed before the importance of Smith’s work was acknowledged. The popularity of Smith’s work from the early nineteenth century coincided with the rise of the commercial and industrial bourgeoisie and growth in political economy literature. The Classical Economists, most notably David Ricardo and James Mill, broadly subscribed to Smith’s principles but for Ginzberg there was a conceptual gap between them. Whereas Smith described the great philosophical principles governing human society and relations within the context of a dynamic and expanding capitalist economy, the Classical Economists devoted their time addressing concerns relating to the “business economy of their own day” (p.167). Ginzberg argues that these later economists incorrectly believed Smith’s work to be primarily concerned with defending private enterprise, free-market capitalism, when in fact Smith “was not an economist of modern industrialism” (p.148). By painting a grim picture of the industrial system and the deviations and distortions of laissez-faire perpetrated by Smith’s acolytes, Ginzberg draws a clear distinction between the nuanced moralistic and philosophical aspects of Smith’s work and the more hard-nosed ideology of the nineteenth-century practitioners of the ‘dismal science,’ who despite believing themselves to be preaching Smith’s “gospel” were “false prophets” (p.168).

“The use to which Adam Smith was put by the avaricious capitalists resulted in the reformers’ antagonism towards him. His true character was lost in the battle over property rights and class privileges” (pp. 200-1).

While attributing sophistry and deception to the Classical Economists, Ginzberg acknowledges that the theoretical development of the political economy was in its infancy, and economic conditions were substantially different from Smith’s day. Moreover, it is surely the case that such a jaundiced view underestimates the theoretical contribution made by Smith’s successors, most notably Ricardian comparative advantage.

One of the main problems with Ginzberg’s approach is that while he has undertaken a close reading of Smith’s work he rarely allows for or identifies intellectual influences. The Physiocrats are dismissed in a few sentences, and other economic writers not mentioned at all. Yet Smith was clearly familiar with arguments made by earlier thinkers for breaching the monopolies enjoyed by Chartered Companies, for he integrated these critiques into his work. Ginzberg also underplays the influential arguments of Josiah Tucker and David Hume relative to foreign trade expansion and domestic economic development. Smith’s ideas did not emerge in a vacuum, but represented a convergence of different strands of earlier ideas and proposals. The conceptual framework for his theories came from a respectable if eclectic intellectual lineage.

The propensity of succeeding generations to reinterpret issues in the light of contemporary events, and more plainly, by the more rigorous research methods of modern scholarship, mean it is ultimately the fate of all historical works to be superseded. Given the time which elapsed between the first appearance of the book and its republication, Ginzberg’s work is no different. Recent critical analysis and the publication of letters and journals have enriched our knowledge and understanding of Smith and have led to more refined interpretations of his philosophical principles and policy prescriptions. While these works do not make Ginzberg’s work obsolete, his book must be considered within the context of recent research.

Over time, the use of Smith’s theories to justify particular schools of thought has intensified, and his work continues to inform contemporary debates on globalization. His legacy is a contested one, with free-market ideologues vying with radical libertarians and Third Way thinkers in claiming Smith’s ideas for their own political views. Most consistently, from the Classical Economists to the Austrian School, Hayek, and Friedman, Smith’s work has been a foundational text in the advocacy of classical economic liberalism and political conservatism. In that sense, Ginzberg’s plea to re-assess Smith’s writings free from the ideological trammels of later thinkers and contemporary political controversy is a reasonable one. A modern re-publication is, therefore, useful as a timely reminder of the constant need to question unspoken assumptions and to reconsider the power of historical legacies and the ideological battles that continue to inform, influence, and shape them.