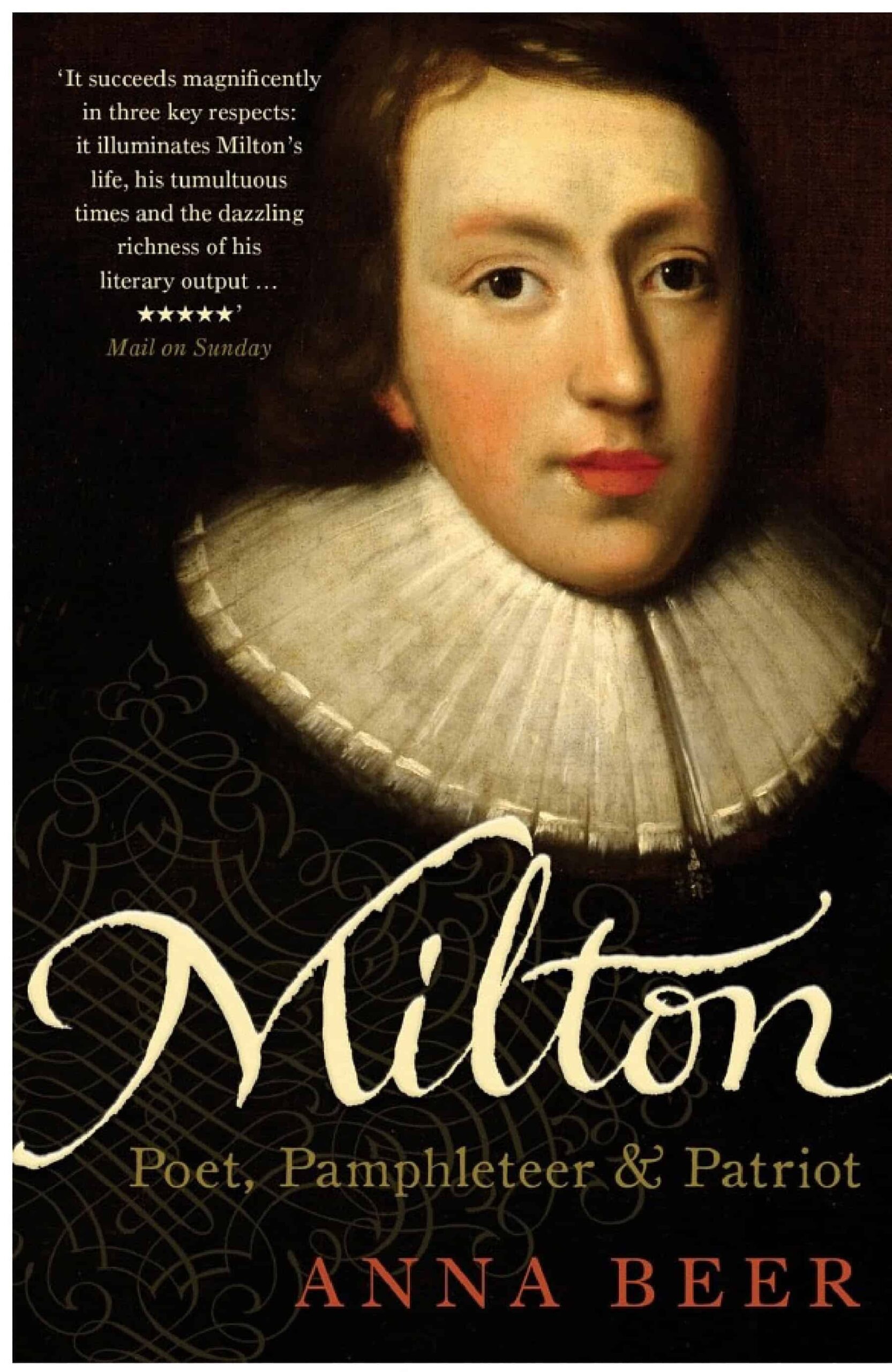 John Milton (1608-1674), regarded as one of the greatest English poets, thought by some to rival Shakespeare, was a late bloomer. He lived at home well into his 30s and engaged in private study, after having obtained a BA and MA at Cambridge and mastering Latin, Greek, Italian, Spanish, some Hebrew, and Dutch. But as Anna Beer, a lecturer and a Fellow in Literature at Oxford, observes in this careful, even-handed biography, “John Milton had problems. He was still living with his parents. He still did not have a profession [having rejected the Church and Law]. He was (it could be argued) still reading far too many books. And he appears to have been in love with a man.”

To Charles Diodati, his dear friend and possibly his lover, he wrote, “What am I pondering, you ask? God help me, immortality.” Though his masterpiece, Paradise Lost, was not published until he was past 50, he steadfastly prepared for his role as a great English poet. Fortunately, his father, a composer, earned a good living as a scrivener, moneylender, and real estate investor, providing Milton with an exemplary education, travel abroad, and lots of free time.

What is apparent from Beer’s book is that Milton was intensely involved in the political, religious, and sexual debates of his age. His positions were often unpopular, controversial, and heretical. As a young man, he was an outspoken proponent of chastity and seemed to elevate the love and friendship between like-minded men above the inferior dealings between the opposite sexes. This added fuel to the suspicions of his homosexuality. Beer is careful to say there is no proof one way or the other about his sexual preferences, but his descriptions of heterosexual lovemaking (“husband and wife grind in the mill of an undelighted and servile copulation”) seem to reveal considerable distaste and repulsion, even though, after Diodati’s early death, Milton married three times and fathered four children.

John Milton
He sparked other controversies as well: besides being a known advocate of divorce in his tracts, Milton championed freedom of speech in Areopagitica. He believed in a republic, not a monarchy; was deeply Protestant and against the papacy, but ultimately favored the freedom of worship and the separation of church and state—all risky positions in 17th century Europe.

After King Charles had been executed in 1649 in the aftermath of the English Civil War, Milton thrived under the government of Oliver Cromwell in the Interregnum, filling a government post as Minister of Foreign Languages. Upon Cromwell’s overthrow, however, he feared for his life.  When Charles II assumed the throne in 1660, many of Milton’s countrymen were executed, drawn and quartered, their heads boiled and hung from spikes from the city’s walls. Although he was imprisoned for two months, it was conceivably his reputation as a pamphleteer and a very learned man who, by then, was blinded by glaucoma, which spared him.

Milton survived all the other upheavals of the century as well—the Plague, the Great Fire of London, the deaths of his first two wives and a son, and varying degrees of financial hardship. His loss of vision, which critics blamed on Milton’s sins, made composition difficult. Always careful of his legacy, he ensured that copies of his major works were sequestered in libraries and reprinted often. His oeuvre included pastoral poems, a masque, political writings, and the epic poems, Paradise Lost, Paradise Regained, and Samson Agonistes.

Beer reconstructs for us the controversies of the day, focusing on the bullying of Milton based on his effete looks, sexual mores, and radical political views. She excels in positioning him in the political, religious, and sexual contexts of his time, providing an astute reading of Paradise Lost and addressing critics’ views that Milton was “of the devil’s party”—namely, that Satan emerged as the “charismatic, intelligent, ruthless” character. She also demonstrates the psychological underpinnings of Milton’s characters, the contradictions inherent in Satan’s quest, the logical problem of blaming Eve for the fall of mankind (she was designed to be inferior and subservient to her master, Adam, who should have protected her and led rather than followed her lead), and the promise of redemption through the Son of God. Beer does not fail to share her delight in the language itself:

Some natural tears they dropped, but wiped them soon;
The world was all before them, where to choose
Their place of rest, and providence their guide:
They hand in hand with wandering steps and slow,
Through Eden took their solitary way.

This biography is thorough and balanced and amazing in its detail of a life 400 years in the past. Undisputedly, Milton is one of our literary greats, and the very causes he promoted—freedom of conscience, freedom of the press, freedom to divorce, freedom to love regardless of gender, as well as the separation of church and state and republicanism as opposed to monarchy—forge a powerful link with a 21st century reader. Some may wish for more sensationalism (read: dirt), but Beer is circumspect and never makes claims she cannot, in all conscience, back up.