MAIN MENU
Alfred Hitchcock Film Interview
The undisputed “master of suspense,” Alfred Hitchcock (1899–1980) was an iconic film director and producer of over 50 movies, including Dial M for Murder, Vertigo, North by Northwest, Psycho, and The Birds. The techniques he pioneered inspired a new generation of filmmakers and revolutionized the “thriller” genre. 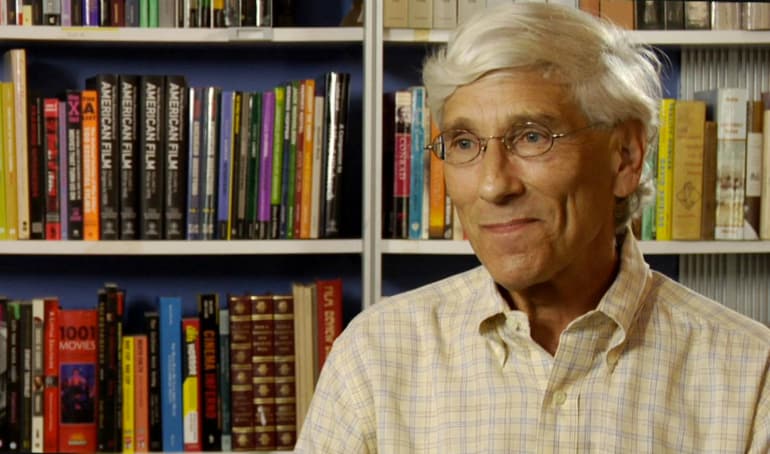 For The Birds: David Sterritt Zooms In On The Mystery And Mastery Of Alfred Hitchcock’s Movies

The undisputed “master of suspense,” Alfred Hitchcock (1899–1980) was an iconic film director and producer of over 50 movies, including Dial M for Murder, Vertigo, North by Northwest, Psycho, and The Birds. The techniques he pioneered inspired a new generation of filmmakers and revolutionized the “thriller” genre.

A renowned film critic, David Sterritt is currently Chair of National Society of Film Critics, as well as Adjunct Professor at the School of the Arts at Columbia University. He is also the author and editor of many books, including The Films of Alfred Hitchcock.

Simply Charly: What’s the origin of Hitchcock’s fascination with suspense and fear?

David Sterritt: These were closely interconnected for Hitchcock, and he often said his fascination with them started when he was a little boy, and his father had the local police lock him in a jail cell for a few minutes, as a punishment for something he’d done. But sometimes he came up with other stories to explain this interest—in an article he wrote called “Why I Am Afraid of the Dark,” for instance, he traced it to the age of four or five when his parents left him alone while they went for an evening stroll. Another turning point came when he discovered Edgar Allan Poe as a teenager and realized that the scariness of a story like “The Murders in the Rue Morgue” was enjoyable since it’s fun to be frightened when you know you’re actually safe. In his movies, he wanted to give people the thrill of make-believe danger in an unthreatening environment—although he was quite a trickster, and a couple of his pictures had mayhem breaking out in a movie theater!

SC: Aside from his well-documented fear of eggs and policemen, did he have any other phobias? If so, were they reflected in his films?

DS: Those were his best-known fears, although the egg thing was more of an idiosyncrasy than a full-blown phobia. He also had a thing about birds, which symbolize danger and chaos in movies like Blackmail, Psycho, and, of course, The Birds, where our feathered friends are anything but friendly. Alongside these fears, Hitchcock had a generalized anxiety that accounts for the cautious, conservative life he led—he always dressed like a proper gentleman, had one marriage that lasted more than fifty years, pre-planned his movies to the smallest detail, and so on. He also displaced his own phobic tendencies onto his characters, who have all kinds of exaggerated fears: Lina in Suspicion is terrified of her husband, Uncle Charlie in Shadow of a Doubt won’t have his picture taken, Scotty in Vertigo has acrophobia, Marnie in Marnie is frightened by the color red. Hitchcock also loved to play practical jokes, and some of them were nasty—another way he allowed his private demons to let off steam in public.

SC: What are some of the techniques he pioneered in his films?

DS: Hitchcock was literally a pioneer of modern cinema since 1929 when he directed Blackmail, the first British movie with synchronized sound. And he never lost his taste for technical challenges, which often blazed a trail for later filmmakers—for example, Lifeboat is set entirely on a small boat, Rope takes place in a single apartment and has almost no visible cuts between shots, Dial M for Murder was made in 3-D, Rear Window views most of the action scenes through distant windows, and Psycho kills the main character halfway through the story. He also had a genius for subjective camerawork, showing a person or object the way it would look through a character’s eyes—when he does a zoom shot with a moving camera in Vertigo, for instance, to make you feel Scottie’s terror in high places. And he developed a no-frills, almost minimalist acting style, telling his stars to tone everything down so the camerawork and editing would do the work. According to some people, Hitchcock thought actors were cattle, but he denied that—what he actually thought was that actors should be treated like cattle!

SC: Why did he always briefly appear in his own movies?

DS: Hitchcock was a first-rate promoter and marketer, and one of his best tools was to make himself a celebrity by showing up in all sorts of ways—he introduced his weekly TV shows, he was always on the cover of Alfred Hitchcock’s Mystery Magazine, and he made those famous walk-on appearances, which started in The Lodger, one of his earliest movies, because he didn’t have enough extras to fill out a crowd scene. Sometimes his cameos have a specific meaning; in Rear Window, for instance, you see him through an apartment window winding up a clock, literally tightening the spring of the suspense he’s setting up. And sometimes they’re just funny—in Lifeboat, you see him in a weight-reduction ad on a newspaper page floating in the ocean, and in Strangers on a Train, he’s carrying a bass violin which is shaped almost the same as him!

SC: Hitchcock is often credited with “inventing” the thriller genre. Did he really, or have other filmmakers before him (or concurrently) made successful suspense movies?

DS: Hitchcock didn’t invent the thriller, but his innovations brought it into the modern age. He was strongly influenced by German expressionist films, including dark and frightening ones like Destiny and Nosferatu: a Symphony of Horror, and almost every American filmmaker who has directed a suspense movie since the middle 1940s has been influenced by him, directly or indirectly.

SC: By the same token, in what way were his movies different from others of the same genre?

DS: He took crime and violence out of the shadows and into the light of day, showing that mayhem doesn’t break out only in dark alleys and dens of iniquity but also in ordinary places like a bathroom (Psycho) or a church (Vertigo) or a concert hall (The Man Who Knew Too Much) or a cornfield (North by Northwest). He also drew a distinction between suspense and surprise, which he explained by saying that if a bomb goes off in a restaurant, it’s a big surprise for the audience, but it’s over in a few seconds; whereas if you let us know there’s a bomb under one of the tables, you can keep us twisting in suspense as long as you want. Zillions of filmmakers have learned that lesson by now.

SC: Hitchcock has topped a poll of directors who most deserved to win an Oscar but never did. Despite six nominations for films including Psycho and Rear Window, Hitchcock was denied an Academy Award. Do we know why, and also, what was his reaction to being rejected six times?

DS: The reason is that the Academy Awards are silly—a self-congratulation exercise by Hollywood where publicity matters more than artistry. In any case, Hitch is in great company since giants like Orson Welles and Stanley Kubrick never received Oscars either. But nobody likes being passed over, so his reaction was definitely not cheerful.

SC: Hitchcock praised Luis Buñuel as the best director ever. Did he admire any other filmmakers?

DS: Hitchcock told me he admired Buñuel for the simplicity and straightforwardness of his style, and many of Hitch’s best scenes have the same virtues; he was also fascinated by surrealism—the dream sequence in Spellbound is Exhibit A—and Buñuel was the all-time greatest surrealist filmmaker. Others he admired were the German expressionists Fritz Lang and F. W. Murnau, and Soviet silent-film directors like Sergei Eisenstein made him realize the enormous power of film editing.

SC: Which contemporary directors have been influenced by Hitchcock’s vision and techniques?

DS: The world champion of Hitchcock imitators is Brian De Palma, who regards Hitch’s work as a sourcebook of excellent ideas and feels that stealing from the masters is nothing to be ashamed of. David Lynch was obviously influenced by Hitch in pictures like Mulholland Dr. and Blue Velvet, and Gus Van Sant paid Psycho a compliment by directing a faithful (and pointless) shot-for-shot remake. Outside the American film industry, all the great French New Wave directors worshipped Hitchcock—François Truffaut, Jean-Luc Godard, Claude Chabrol, Eric Rohmer, Jacques Rivette—and you can find Hitchcockian touches in movies by everyone from Mario Bava and Dario Argento in Italy to Ye Lou in China and Takashi Miike in Japan, plus many others. Hitch’s influence has gone global in a big way.

SC: Which of his movies are your favorite and why?

DS: Vertigo and Psycho are his most profound films, and North by Northwest probably has the most cinematic virtuosity. The period from Strangers on a Train in 1951 through Psycho in 1960 is unsurpassed for sheer creative brilliance—in addition to those titles, he made Rear Window and The Wrong Man, which are masterpieces; To Catch a Thief and The Trouble with Harry, which are delightful; Dial M for Murder and the 1956 version of The Man Who Knew Too Much, which are always worth revisiting; and several less-successful films that also have intriguing points. Many others are also brilliant, from The Lodger and Shadow of a Doubt to Notorious and The Birds. He made bad pictures now and then—there’s hardly anything good about Jamaica Inn, for instance—but there’s no other director whose movies so consistently surprise and captivate me.

Tags: Alfred Hitchcock, Film, For The Birds: David Sterritt Zooms In On The Mystery And Mastery Of Hitchcock's Movies, Interview