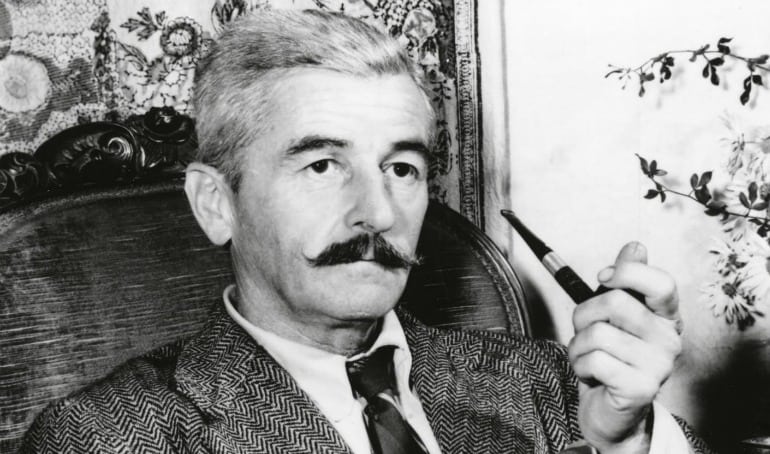 The name of William Faulkner evokes such literary masterpieces as The Sound and The Fury and As I Lay Dying.

But before he became a renowned novelist, Faulkner (1897–1962) was writing poetry. His volumes, Vision in Spring and The Marble Faun, were published in 1921 and 1924 respectively; yet, Faulkner considered himself to be “a failed poet.”

Having had such a low opinion of his poetic abilities, Faulkner would be astonished to learn that his previously unknown book of poetry, written in the summer of 1919, was recently valued at between $70,000 and $100,000 at the “Antique Road Show” TV program.

The owner of the hand-written and beautifully illustrated book said the poems therein were dedicated to a woman with whom Faulkner “had a summer fling” that year.

The identity of the woman, however, is a mystery. The previous year, Faulkner was involved with his childhood sweetheart, Estelle Oldham, but she married another man that April.

We do know that Faulkner gave two hand-lettered and bound books of poems to another woman, Helen Baird. However, he courted her in 1925, so she could not have been the object of his affection in the 1919 volume.

Faulkner answered the question of why he gave up poetry and turned to prose in “The Paris Review” interview in 1956: “Maybe every novelist wants to write poetry first, finds he can’t, and then tries the short story, which is the most demanding form after poetry,” he said. “And, failing at that, only then does he take up novel writing.”

His first novel, Soldiers’ Pay, was published in 1926, followed by 17 others, spanning the next four decades. In 1949, he won the Nobel Prize “for his powerful and artistically unique contribution to the modern American novel.”

Still, for all of Faulkner’s accomplishments as a novelist, the fact remains that in the summer of 1919, his poems had made one woman (presumably) very happy.