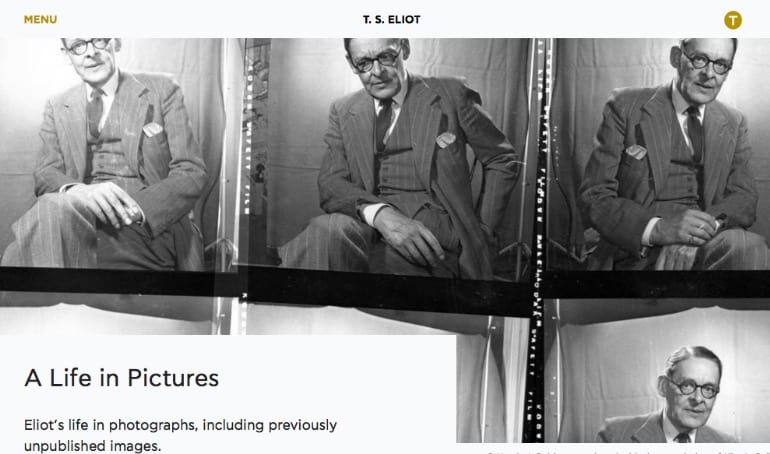 In 1915, T. S. Eliot (1888–1965) rocked the literary world with the publication of a poem titled The Love Song of J. Alfred Prufrock. Considered bold for its time, the poem was written as a stream-of-consciousness by a man reflecting on his romantic failures.

Now, a little more than 100 years later, the legacy of one of the greatest poets of the 20th century is back in the public eye with the release of new letters, essays, and photographs on tseliot.com, a website launched by Faber & Faber publishing house and the writer’s estate.

Designed to “continue the mission” of Eliot’s late wife, Valerie, “to bring her husband’s life and work to as wide an audience as possible,” the website curates Eliot’s poems—some of which are still under copyright—and publishes, for the first time, scores of photographs of Eliot and his family, along with screenshots of chapbooks, letters, and theater programs of his plays.

Along with the new trove of material, made public free-of-charge, the site also features mundane letters (“We got home safely. Do not like yr. going to Paris alone,” written to a Mary Hutchinson), as well as  witty exchanges with fellow poets, such as Conrad Aiken, about the academic life:

“…life is pleasant in its way, and perhaps I am also contented and slothful, eating heartily, smoking, rowing violently upon the river in a four oar, and performing my intellectual stint each day. Oxford even at this time is peaceful, always elegiac. It is Alexandrine verse, nuts and wine. What else? Oh yes, I have had to buy a large collar.”

The new website, which will be updated with more material, offers an opportunity to new readers and serious researchers alike, to explore and discover new insight into the prominent poet’s life and works.

“T. S. Eliot,” the website says, “excelled not only as a poet, but also as a dramatist, critic, editor, and publisher and tseliot.com means to do justice to that variety.”

Eliot followed Prufrock with scores of essays, plays, and poems—from his seminal work, The Waste Land, to The Hollow Men and Four Quartets—that rank among the most read and dissected among academics and poetry lovers.

Literary critics have considered his poems to be masterpieces of modernist poetry, a reaction to the more formal verse of the 19th century. Reflecting on the influence of Ezra Pound, Eliot’s work includes snippets of foreign languages, including Greek, Italian, and Sanskrit. Pound, who helped Eliot with edits on The Waste Land, acknowledged its importance shortly after the poem’s publication in 1922.

“Waste Land is I think the justification of the ‘movement,’ of our modern experiment, since 1900,” Pound wrote.

In 1948, Eliot was awarded the Nobel Prize in Literature “for his outstanding, pioneer contribution to present-day poetry.”

Often lost, however, is Eliot’s own influence on and guidance given during his 17 years as the editor of the journal Criterion, to a younger group of poets, such as W. H. Auden (whose work Eliot initially turned down), Stephen Spender and Ted Hughes.

In a letter supporting Hughes’ application for a Guggenheim Grant, Eliot wrote that the young poet’ s work “impressed me more deeply than any first volume of verse by an unknown author which I had seen for a very long time. The Hawk in the Rain is both an achievement, and promise of still finer work to come.”