MAIN MENU
Literature Samuel Beckett
An Irish avant-garde playwright, poet and novelist who is considered one of the fathers of the postmodernist movement, Samuel Beckett (1906–1989) was awarded the Nobel Prize for Literature in 1969 “for his writing, which—in new forms for the novel and drama—in the destitution of modern man acquires its elevation.” 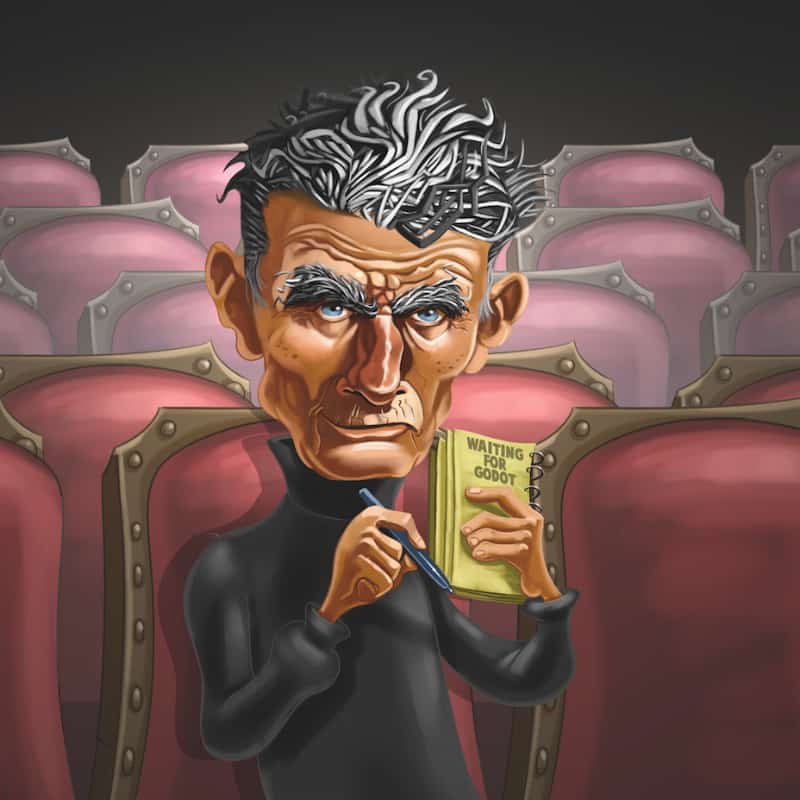 One of the most influential writers of the 20th century, Samuel Beckett was a complete original whose work combined a terminally bleak view of existence with remarkable dramatic innovation and dark humor. His most famous play, Waiting for Godot, transformed the way we think about theater, and this and other works paved the way for the many notable playwrights and novelists who followed him.

The first avant-garde playwright to win international fame, Samuel Beckett was the younger son of a middle-class, Protestant family living in a Dublin suburb of Foxrock. During his childhood, he once remarked that he had “little talent for happiness.” This gloomy mindset, which included bouts of depression, lasted throughout his life, spilling over to his works, all of which focused on meaninglessness, randomness, and transiency of life.

Beckett started to learn French as a child, becoming fluent enough to write later in this language—in fact, most of his major works were written in French before being translated into English. He attended Portora Royal boarding school in Northern Ireland, the same educational institution where his famous countryman, Oscar Wilde, had studied in the 1860s.

In 1923, Beckett enrolled in Trinity College, studying French and Italian. Upon graduating in 1927, he was awarded a two-year post as an assistant professor of English at the École normale supérieure in Paris. He became a fixture in French literary circles, where he met another Irish expatriate, novelist James Joyce.

Beckett was strongly influenced by his compatriot and helped to research the work that would eventually become Finnegan’s Wake. During that time, he also decided to quit academia and devote himself to writing instead.

An interesting anecdote relates to an event that happened in Paris. In 1938, a panhandler stabbed Beckett with a knife, perforating his lung. A young piano student named Suzanne Deschevaux-Dumesnil came to his aid, and the two began a lifelong relationship, finally marrying in 1961.

In the 1920s and 30s, Beckett penned some stories and poems, including Whoroscope, in which he described the philosopher René Descartes meditating about the transiency of life. In 1932, Beckett wrote his first novel, Dream of Fair to Middling Women. It was rejected by publishers at the time, but was eventually released posthumously in 1992. However, two years later, he published a volume of short stories titled More Pricks than Kicks, which was partially derived from the Dream.

Murphy, which was released in 1938, was Beckett’s first published novel. His literary career was put on hold during World War II when he joined the French Resistance movement; in 1945, he was awarded the Croix de Guerre, France’s military medal honoring people who fought against the Nazis.

It is worth noting that—possibly because of heavy and dark themes that permeated his works—Beckett’s plays were not immediately well accepted, or, for that matter, widely understood. For instance, when Godot—arguably Beckett’s most famous work—opened in London on January 5, 1953, critics called it “the strange little play in which ‘nothing happens.'” However, it gradually became a success, as did his other plays, and Godot is generally accepted as a cornerstone of contemporary theater.

Beckett died of respiratory ailments in a Paris hospital, after spending months in a nursing home. He was buried at the Montparnasse Cemetery, in the city that had been his home for most of his adult life.

Although, as New York Times noted in Beckett’s obituary, his name “in the adjectival form, Beckettian, entered the English language as a synonym for bleakness,” he was widely regarded as one of the most influential writers of the 20th century. He inspired subsequent playwrights to experiment with the absurdist style that was Beckett’s trademark.

As the Nobel committee noted, its literary prize was awarded to Beckett “for his writing, which—in new forms for the novel and drama—in the destitution of modern man acquires its elevation.”